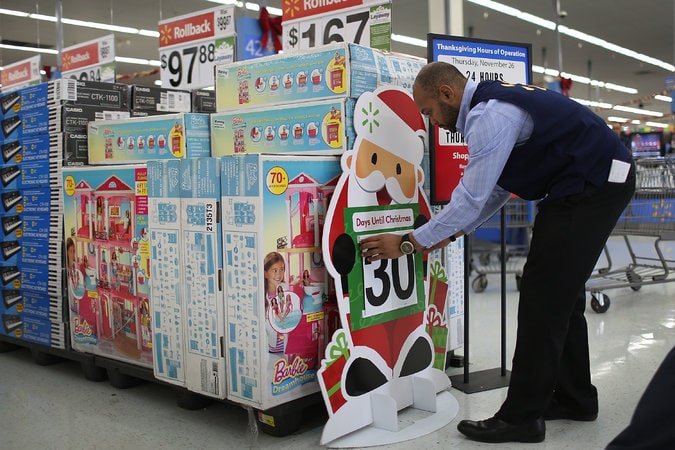 Imports from China by Walmart, the nation’s largest retailer and biggest importer, eliminated or displaced over 400,000 jobs in the United States between 2001 and 2013, according to an estimate by the Economic Policy Institute, a progressive research group that has long targeted Walmart’s policies.

The jobs, mostly in manufacturing, represent about 13 percent of the 3.2 million jobs displaced over those same years that the study attributes to the United States’ goods trade deficit with China. Walmart’s Chinese imports amounted to at least $49 billion in 2013, according to the study, which was based on trade and labor data. Over all, the United States’ trade deficit with China hit $324 billion that year.

“Walmart is one of the major forces pulling imports into the United States,” said Robert E. Scott, an economist at the institute and the study’s author. “And the jobs we’re losing are good-paying manufacturing jobs, which pay higher wages and provide better benefits.”

Walmart disputed the conclusions of the study, which is an update of estimates that the institute released in 2007. For one, many of the numbers used in the study rely on guesswork, because retailers do not generally release a breakdown of their imports.

Some economists also point out that studies like these do not properly account for the jobs that imports can create in industries like transportation, wholesale and retail.

“We are very proud of our U.S. manufacturing initiative, and the results speak for themselves. By investing in products that support American jobs, we are able to bring new products to our shelves while bringing new jobs to local communities in Ohio, Tennessee, California and many others,” Lorenzo Lopez, a Walmart spokesman, said in a statement.

“Unfortunately, this is an old report with flawed economic analysis that assumes that imports equal job losses and does not take into consideration that countless jobs are added through the global supply chain, distribution and logistics, among other areas of the business,” Mr. Lopez added.

Walmart has long been the subject of criticism from groups like the Economic Policy Institute over its role in flooding the United States with cheap imports. Under pressure, Walmart in 2013 announced that it would increase its sourcing of American-made products by $50 billion over the next 10 years.

The retailer said at the time that it would buy more goods already produced in the United States, like games and paper, and help vendors in areas like furniture and textiles return production that had moved overseas.

But critics quickly rebuffed the initiative as a public-relations stunt, pointing out that the $50 billion made up just a fraction of the sales growth Walmart — which has annual sales of almost $500 billion — was likely to log over the next decade.

Harold L. Sirkin, a senior partner and managing director at the Boston Consulting Group, said that America’s trade deficit with China had indeed led to net job losses. But as labor costs soared in China, that situation was reversing — and Walmart’s move was significant.

“What we’re seeing now is that more things are coming back to the U.S.,” Mr. Sirkin said. The cost to retailers of sourcing furniture and appliances in the United States, for example, was becoming comparable to the costs of importing those products from China, he said.

The institute’s study estimated the direct and indirect labor requirements of production in 195 industries, of which 77 were in manufacturing. It estimated the labor that would be required to produce a given volume of exports, and the labor displaced when those imports replace domestic output.

The Power of Manufacturers Using ‘Made in USA’ in Marketing

Why Buying American Made is Important: An Intro To Our Newest Contributing ...
Scroll to top
%d bloggers like this: