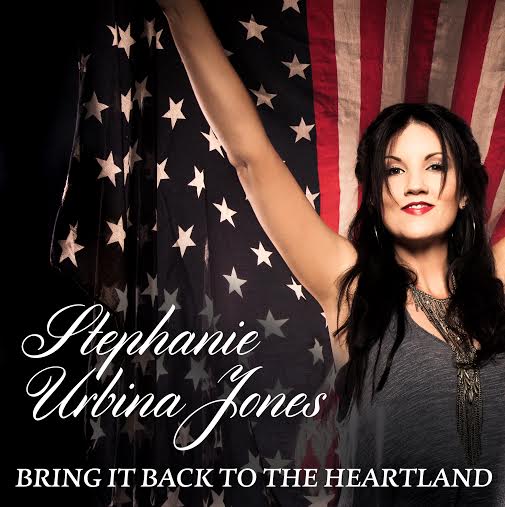 SCRANTON, Pa., Nov. 23, 2015 /PRNewswire-iReach/ — The Made in America Movement is proud to announce their first Celebrity Ambassador, Stephanie Urbina Jones, the Hispanic-American artist who is heating up contemporary country music with her unique Latin flair.  Listen to how Ambassador Jones is helping to raise awareness for The Made in America Movement through her song, “Bring It Back to the Heartland,” from her new CD release, Fiery Angel. Co-written with songwriter Mark Marchetti, “Bring It Back to the Heartland” speaks to the restlessness and loss of hope that Jones has witnessed among the people in her audiences throughout the country.

“I have long been a fan of this lady’s work. Her voice is as throaty and emotive as ever on this topical single. The lyric yearns to bring the nation back to its better years when we had mom-and-pop stores, products made in the U.S.A., family farms, good jobs and the American Dream.”

Ambassador Jones hopes that the message of “Bring It Back to the Heartland” and her work with The Made in America Movement will empower, and inspire, people to make positive changes, small and large. “We are in this together” to help create American jobs by supporting businesses and entrepreneurs that invest in American ingenuity, hard work and perhaps above all, the American people.  “Bring it Back to the Heartland” is climbing the music charts as it’s message is gaining momentum. “Never before has a song I have sung hit such a cultural nerve and brought people to their feet,” Ambassador Jones states. “This is not about politics, religion or corporations. It’s about people and bringing back the HEART of what made this country great!”

As a conduit for change, The Made in America Movement seeks to inspire, educate and promote awareness of the power that the American people hold in sustaining the domestic economy with the power that we, individually and collectively, have to rebuild and fortify this country’s economy by looking for the Made in USA label. Even when corporations take jobs overseas to cut costs, thereby hurting American jobs and manufacturing, consumers can counter corporate abandonment by demanding American-made goods and services. The Made in America Movement points out on its website:

Did you know that buying American-made products creates jobs? The average American will spend about $700 on gifts this year. If only half this amount was spent on gifts Made in USA, up to a million American jobs would be created!

Building on The Made in America Movement philosophy of voting for America with your wallets and by hiring American workers, the Movement has also compiled a Made in the USA Holiday Gift Guide for the holiday shopping season. Shoppers will find gifts at varying affordable price points, with the distinction of being Made in the USA. It’s a good way to show patriotism during this giving time of year, and a great opportunity to invest in American brands all year long.

Become a MAM Ambassador within YOUR community today! Here’s how: MAM Ambasssador

The Made in America Movement is excited that Stephanie Urbina Jones, an artist on the rise, has chosen to lend her remarkable voice as an Ambassador to help spread our mission to raise consumer consciousness.  She is the first female independent artist to reach #1 on the Texas Music Chart. 2015 has proved to be her biggest year yet, as she has taken her gutsy Latin-infused, singularly-styled, American-born country music to international audiences at the prestigious Montreux Jazz Festival in Switzerland, the Magic Town Music Fest in Mexico, the Craponne Country Rendezvous in France, Country Gold in Kumamoto, Japan, Americana Cavalcade in Scotland and beyond. Jones also co-wrote “My Baby’s Got a Smile on Her Face.” Recorded by Craig Wayne Boyd, winner of the Emmy-winning TV show, The Voice, the song debuted at #1 on theBillboard Hot Country Songs Chart.

“By joining forces, we can unite American voices, and put America to work” says Margarita Mendoza, Founder of The Made in America Movement. Anyone interested in joining voices and following in Jones’ lead in helping to rebuild America, is encouraged to become a MAM Ambassador within their community.

Of “Bring It Back to the Heartland,” music critic Robert K. Oermann noted in Music Row magazine, “I have long been a fan of this lady’s work. Her voice is as throaty and emotive as ever on this topical single. The lyric yearns to bring the nation back to its better years when we had mom-and-pop stores, products made in the U.S.A., family farms, good jobs and the American Dream.”

About The Made in America Movement

The Made in America Movement was founded, and launched, in 2010. Their mission is to educate consumers on the importance of purchasing products with the “Made in USA” label. It is the nations leading organization committed to American manufacturing, Education, Veterans, and celebrating American made brands, and manufacturers who are keeping their manufacturing, and production, in the USA. They currently have over 250 members and sponsors located all over the United States. For more information, please visit: www.themadeinamericamovement.com or email them at info@themadeinamericamovement.com

Closing Loopholes in Buy American Act Could Create up to 100,000 U.S. Jobs
Scroll to top
%d bloggers like this: