Allow me to introduce myself. I’m Jordan, founder of the blog Miss American Made. I write about all things made in the USA that I love. I also share my life, favorite places to eat, some political opinions, and just my life in general.

I am SO excited to be guest blogging on The Made in American Movement! It’s pretty awesome to get to collaborate with such a great organization. I hope I can do my best to bring you guys some trendy, cute, outfits and products in my guest posts.

Well…. Let’s get right to it! END_OF_DOCUMENT_TOKEN_TO_BE_REPLACED 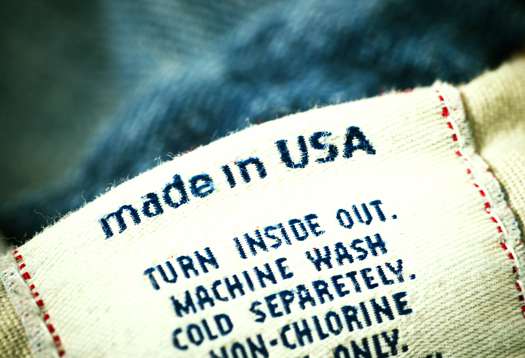 November 30, 2012
For many years, apparel manufacturing has been slow in the United States due to the availability of cheaper labor and production options overseas. But the industry is currently in the middle of resurgence amidst a growing demand for better quality products that are exclusively ‘Made in the USA.’ A nation-wide initiative to revive and support apparel manufacturing in the country is in action, led by the U.S. Department of Commerce and actively supported by the state of California, particularly by the Los Angeles garment district.

By 2007, 95% of apparel bought in the U.S. is imported from abroad. It’s primarily a combination of political, economical, and social factors with lower prices as a major driving force. Apparel manufacturing rose shortly after World War II when retailers met the demand from an increasingly affluent American population with the same mass production processes used to make military uniforms for the war.

When Japan and Asian countries came into the picture offering a competitive advantage of cheap labor on mass-produced apparel, the industry started to decline. By the 50s and the 60s, mass retailers were highly dependent on Asian labor to produce clothing designed in the U.S. By the mid-1980s, bulk of American apparel production has been moved overseas.

An economic downturn in the 70s, the emergence of branded labels that sourced from foreign contractors, and a demand for synthetic fibers readily available from Asia eventually led to the almost complete disappearance of clothes Made in U.S.A. In 2005, apparel imports from China rose to almost 100% after import restrictions on textiles and apparel expired in 2004.

Stamping the ‘Made in USA’ Quality

Despite the market’s heavy reliance on mass-produced clothes, there have been calls to improve quality and to bring back manufacturing in our own backyard. The textile and apparel sector is also at the forefront of the current administration’s National Export Initiative aimed at doubling U.S. exports by 2014. At present, the industry directly supports 400,000 jobs and the ‘Made in America’ initiative is designed to promote even more.

In August, L.A. Mayor Antonio Villaraigosa announced the first ever ‘Made in L.A.’ Pavilion at the Sourcing at MAGIC tradeshow, held in Las Vegas in the same month. The announcement came alongside a string of initiatives aimed at promoting L.A. as a major garment and apparel center in the global market; one of which was a city-wide ‘Made in L.A.’ logo design contest.

The Sourcing in the Americas Pavilion was also featured for the second time at the largest apparel sourcing tradeshow in North America. ‘Made in the Americas’ was the central theme of key discussions of the Sourcing at MAGIC’s lineup of seminars.

“Building on the huge success we had last year, we felt it critical to return with another Americas Pavilion and Summit to highlight Made in America products. As the largest textile and apparel event of its kind, this forum provides American businesses with a unique opportunity to highlight Made in America products to a global audience,” Commerce Under-Secretary for International Trade Francisco Sánchez announced then.

In the upcoming edition of Sourcing at MAGIC to be held in February next year, the ‘Made in L.A.’ Pavilion will yet again be highlighted. It will capitalize on a bigger-than-ever demand for Made in U.S.A. products and offer countless opportunities for local manufacturers to promote the quality of homemade garments and to come face to face with thousands of attendees, major retailers, and top design companies in L.A.

Currently, the Department of Commerce is also working with Los Angeles in developing an online registry that will make it easier to look for apparel, textile, and footwear manufacturers in the U.S. While sourcing from abroad is not likely to end anytime soon, this and all other government initiatives will hopefully be the start of an increased global awareness and recognition of American competitiveness in the clothing and apparel sector.

In light of a recent study which showed that three in four Americans believe that buying local is important – even if it costs a bit more – it could certainly be said that America is on the right track.