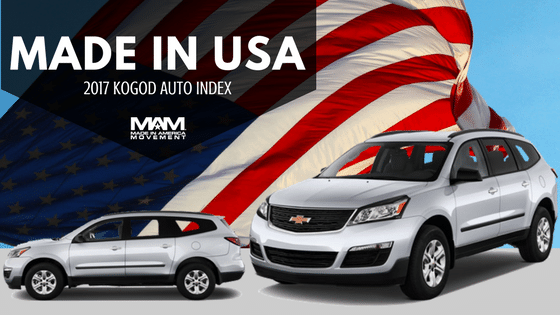 In the United States, American-made products are highly regarded, with good reason, as they obviously boost the local economy as opposed to foreign-made products. However, are all the domestic-brand vehicles really assembled with components sourced from the United States? That’s what the Kogod School of Business figured out.

This establishment just published their 2017 Kogod Made in America Auto Index, which ranks the automotive fleet by their American content, or the percentage of the vehicles that contributes to the local economy. This report rounds up the U.S. and Canadian markets and takes into account where the engine, the transmission, the cockpit and the chassis come from, in addition to the assembly location and even where the profit margin ends up.

'Of the 17.5 million vehicles sold in the U.S. in 2016, approximately 65% were produced in the United States,' according to the study. A vehicle's 'domestic manufacturing composition' helps determine its impact on the U.S. economy, the study said.Click To Tweet

What percentage of your vehicle’s value contributes to the overall well-being of the U.S. economy and why does this information matter to you?

Kogod’s 2017 Made in America Auto Index seeks to answer these questions by evaluating the domestic content of vehicles sold in the US. The index takes into account other aspects of vehicle manufacturing that are not accounted for in other measures.

Why is the Index important?

As such an important part of the U.S. economy, understanding the factors that influence the automobile industry is not just helpful—it is essential. A vehicle’s domestic manufacturing composition plays a key role in determining its overall impact on the American economy. This knowledge empowers consumers and automakers alike to make better economic decisions about where a car is made, and which offer the greatest commercial benefits to the country.

One of the first things a consumer looks at while car shopping is the price and options label.

Since the enactment of the American Automotive Labeling Act (AALA) in 1994, automakers are required to provide information on the label detailing the amount of U.S. and Canadian parts content, the country of assembly, and the engine and transmission’s country of origin.

AALA data, while useful, is not the most accurate means of assessing a vehicle’s contribution to the U.S. economy. It presents a number of limitations; U.S. and Canadian content are combined into one number, and automakers are allowed to round-up a part that is potentially only 70% U.S./Canadian to 100% U.S./Canadian.

Kogod’s method improves on the AALA data by incorporating a more comprehensive research methodology, providing consumers with a more accurate view of their vehicle’s composition.

How Does The Index Work?

The components of the index are based on research into the economic value of different components of auto manufacturing that was done by the Center for Automotive Research in Ann Arbor Michigan. For example, the highest ranked cars are made by U.S. based manufacturers using American engines and transmissions, and a with a high AALA percentage of U.S. and Canadian parts.

The seven criteria are as follows:

In 2014, Fiat acquired the outstanding shares of Chrysler. The new entity, Fiat Chrysler Automotive (FCA), is headquartered in the Netherlands with a tax domicile in London, and shares listed on the New York Stock Exchange. As such, because of the hybrid nature of its organizational structure and its large production and R&D presence in the U.S., we assigned a value of 3 for profit margin and R&D, rather than a 6 or 0.

The Top 10 Most American vehicles, According to Kogod

The Kogod Made in America Auto Index ranks vehicles based on how “American” they are. The study includes numerous tied rankings among the 419 entries. Here are the vehicles ranked in top 10:

'The highest-ranked cars are made by U.S.-based manufacturers using American engines and transmissions, and (with a high) percentage of U.S. and Canadian parts,' the study concluded.Click To Tweet

According to the Kogod study, the auto industry directly employed about 2.5 million workers in 2016 and sold 17.5 million new cars and trucks.

“Of the 17.5 million vehicles sold in the U.S. in 2016, approximately 65% were produced in the United States,” according to the study. A vehicle’s “domestic manufacturing composition” helps determine its impact on the U.S. economy, the study said.

“This knowledge empowers consumers and automakers alike to make better economic decisions about where a car is made, and which offer the greatest commercial benefits to the country,” the release said.

The Advanced Manufacturing Landscape: How Veterans are Saving the Day