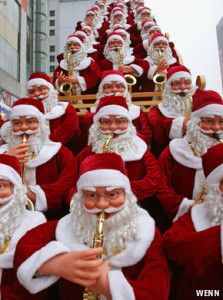 CITIES across China blink with fairy lights, fancy hotels flaunt trees and tinsel, and glossy magazine covers display festive recipes and table settings. “Joy up!” reads a sign (in English) on three illuminated trees by a shopping mall in Beijing. The Chinese are doing just that.

In the first decades of Communist rule in China Christianity was banned, along with other religions. Now there are tens of millions of Christians in China and faiths of all kinds are blossoming. But this has little to do with the country’s fast-growing fascination with Christmas. In the West the holiday is a commercialized legacy of Christian culture; in China it is almost entirely a product of Mammon. Father Christmas is better known to most than Jesus.

Well before Christmas took hold in China’s cities, its factories were churning out Christmas essentials for consumption in the West. Industrially, China is now the Christmas king. According to Xinhua, a state-run news agency, more than 60% of Christmas trinkets worldwide last year came from a single “Christmas village”—Yiwu (in fact, a city), in the eastern province of Zhejiang.

But ever more of these goodies now stay in China, to satisfy a domestic craving. Some are tailored to Chinese tastes: Father Christmases playing the saxophone, for example, are a common decoration—no-one quite knows why. This year some shops are putting Santa hats on sheep; the Chinese new year in February, another excuse for hedonism, will be sheep-themed. A shop selling sex aids in Beijing displays a mannequin with a short Santa hot-pants suit, complete with white furry leg warmers.

Christmas in China never really ends. Decorations sometimes remain up year-round. In 2016 the south-western city of Chengdu will host Asia’s first “SantaPark”— a giant Christmas-themed amusement park modeled on a Finnish attraction. It will be known as the “official home of Santa Claus” (despite Chengdu’s sweltering summers and mild winters).

Family reunions are not part of Christmas tradition in China; for most people it is a chance to enjoy public displays of lights, and, for a growing number of younger Chinese, to exchange gifts with colleagues and friends (China’s home-grown festivals are not so centered around gift-giving). As elsewhere, Christmas in China is a merry time to shop.

Toy Maker To Bring Lincoln Logs Production Back to U.S. PERDUE First Brand to Verify “Raised in the USA”
Scroll to top