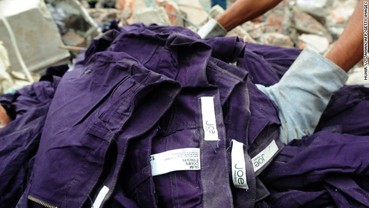 By Calum Macleod
DHAKA, Bangladesh — Just two more months, the daughter promised her mother by telephone, then she’d be home for good.
Making shirts in this packed metropolis of 12 million people, Sheuli Akhter, 20, made decent money — about $140 a month — by the impoverished standards of rural Bangladesh. But she missed the family benefiting from the wages of her hard work.

Her mother, Ranjana Akhter, was found sobbing near the rubble of the Rana Plaza factory where her daughter worked, days after the eight-story complex collapsed and killed more than 1,100 workers. Viewing dozens of corpses a day, the 35-year-old woman still hoped her daughter had somehow survived.

The victims retrieved from the debris were crushed and unrecognizable in the South Asian heat.

“I am looking for her body, but they are all decomposed now. It’s getting harder to identify,” said Ranjana Akhter, tears falling from her eyes.

The scale of the mismanagement and breadth of the human tragedies in Bangladesh powerfully illustrated what years of abuse, inhumane conditions and unthinkable danger could not: Garment workers in Third World countries take enormous risks to earn a living in Bangladeshi-owned companies that produce clothing for Western retailers.

At the end of this global production line stand millions of American shoppers whose favorite companies and brands — Benetton, The Children’s Place, Gap, J.C. Penney, Mango, Target and Sears — use Bangladesh as a launching pad for the goods Western consumers crave.

Clothing manufacturers in North America and Europe — operating with scant supervision of their operations — have made Bangladesh the second-largest exporter of clothes in the world. The enormity of this tragedy is already beginning to change the country’s free-for-all business climate.

More than 30 retail chains including H&M, the largest clothing producer in Bangladesh, agreed to sign onto the proposal, which requires public disclosure of factory inspections and company-paid renovations when problems are found.

But talks broke down between the labor coalition IndustriALL and trade groups representing U.S. retailers like Gap over language that might make stores liable for conditions in Bangladeshi factories while requiring union-style management restrictions. The retail groups said they could improve worker safety by conducting more rigorous inspections of their factories.

A major pillar of Bangladesh’s economy, the garment industry employs roughly 4 million people. Only China exports more clothing than Bangladesh, which has 5,000 factories of varying sizes producing for other major chains.

These global brands thrive in a place where the average worker earns the equivalent of 24 cents an hour, according to the Worker Rights Consortium, a worker advocacy group that criticized U.S. retailers for failing to sign onto the proposed changes. The wage for garment workers is much higher — sometimes four times that — which is why so many people are drawn to the industry.

Many of the garment operations have sprung up in the past decade in buildings sometimes refurbished in a hurry to capture customers. Western retailers contract with myriad unconnected workshops to get fabric and buttons and fasteners needed for their products. Though many importers require inspectors to check on working conditions, they do not oversee all aspects of building safety. Those laws are the authority of the government, which works hand-in-hand with the industry.

In fact, a consortium of Bangladesh factory owners is also a lobbying group that consults with the government on working conditions and safety matters. Government oversight is notoriously weak.

Rana Plaza was showing structural cracks before the collapse. They prompted some businesses to move out of the building, but that wasn’t enough for the factory to shut down. The owner was captured trying to flee across the Indian border and is under arrest on charges that he built illegal additional floors on a building not designed for manufacturing.

Since 2005, at least 1,800 garment workers have been killed in factory fires and building collapses in Bangladesh, according to the advocacy group International Labor Rights Forum. That includes the toll from Rana Plaza.

Despite this carnage, the retail industry has found a needy home in Bangladesh, a nation of 140 million mostly Muslim people that’s home to regular political strife and overwhelming poverty. Sixty million Bangladeshis are classified as “very poor,” and per capita income is $1,700 a year.

Its garment firms, which make up 80 percent of total exports, face pressure from foreign buyers to retain the nation’s chief selling point: the cheapest place to make clothes. The disaster highlights the perilous choice for Bangladeshis in the garment sector, 80 percent of them women who work as seamstresses and support entire families.

Some survivors say the jobs are no longer worth it.

“I will never work in a garment factory again, and never again in a multistory building,” said Asma Akhter, 22, who lay trapped in the rubble for three days before rescue.

‘This can’t be justified’

After a factory fire last November killed 117 people who were making T-shirts and jackets, “the government didn’t take any steps to prevent this type of incident. Another disaster like this can still happen,” she said.

“The garment factory owners sell the products abroad at a high price, but we get low wages. This can’t be justified,” said Asma Akhter, who hopes her secondary school education, unusual among her colleagues, will aid her job hunt.

Others see it differently.

Seamstress Asma Akhter, 25, who is no relation to the woman of the same name above, said she would be “helpless” without the garment sector.

“I don’t know what I could do,” she said. “If you want to survive you have to work.”

But nothing says world retailers have to stay in Bangladesh.

“We must stop the killing,” said Nazmar Akter, president of Sommilito Garments Sramik Federation and general-secretary of the Awaj Foundation of workers’ groups.

“It’s a global business. Everybody has the responsibility,” Akter said. “Workers in Bangladesh are unsafe, hungry, with bad living and working conditions. We are human. We want respect and dignity; that’s our demand.”

It’s Not Easy To Be Sure Your Clothes Come From Safe Factories Made in USA is Back in Style For Small Businesses
Scroll to top
%d bloggers like this: