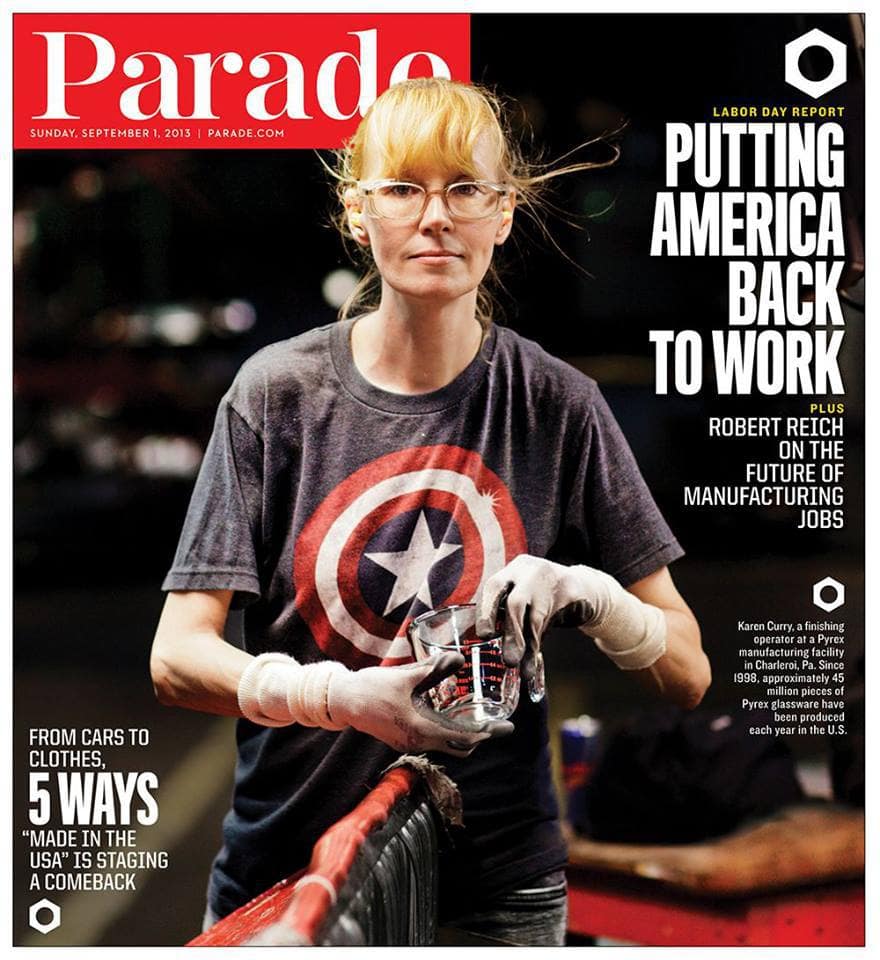 Parade Magazine
Good news: Americans are making things again, from cars to watches to socks. What’s behind the manufacturing upswing—and what it means for American labor.

Sometime in the next year, the line outside your local Apple Store may not be for the latest iPhone or iPad—it may be for a new desktop Mac that was assembled in Texas, with components from Illinois and Florida, using equipment produced in Kentucky and Michigan. Besides being “Designed in California,” the computers will be “Made in America.” And while those Macs will represent only a small slice of  Apple’s total manufacturing, which remains firmly embedded in Asia, it feels good that such an iconic American company is dipping a toe in back home.

In the 1990s, American manufacturing took a hit. When China opened itself to the world 20 years ago, its labor costs were so low (less than 50 cents an hour) that U.S. companies couldn’t resist moving production there, says Willy Shih, a Harvard Business School professor and the coauthor of Producing Prosperity. “Even if they had to ship all their components overseas and then ship everything back, the savings were huge.” Soon, companies offshored component production as well, until eventually entire supply chains were relocated to China.

But starting in the mid-2000s, Chinese labor costs began to rise 20 to 30 percent a year. Fuel prices escalated, too, making it much more expensive to ship products globally. And as the recession forced many U.S. industries to reorganize, American labor costs and productivity rates became competitive again.

Consumer demand could provide a boost, too. In a recent Harris poll of more than 2,000 U.S. consumers, 75 percent said they’d be willing to pay more for American-made products. And according to Joel Joseph, chairman of the Made in the USA Foundation, which funded the survey, the most supportive age group was 18- to 34-year-olds. “This generation suffered the most unemployment during the recent recession,” he says, “and they’ve put two and two together: Buy foreign-made products, give up U.S. jobs.”

Here, on Labor Day weekend, is a look at some of the hopeful new signs for American manufacturing.

This Sheep Made Your Socks

This summer in Mount Airy, N.C., performance-sock maker Nester Hosiery debuted a line of Farm to Feet products. Everything in the supply chain—wool, nylon, elastic, wrapping—is made domestically. Similarly, each pair of blue jeans from the All American Clothing Co. in Arcanum, Ohio, comes with a “traceability number” you can use to track the cotton in your pants back to the U.S. farm where it was grown, the U.S. mill where it was spun, and the U.S. factory where the jeans were cut and sewn. Clothing companies like these are banking on the idea that locavore consumers are ready for threads as “homegrown” as their tomatoes.

“Folks want to know more about where their products come from,” says Kelly Nester, president of the hosiery company. “Being transparent helps buyers feel good about their purchases while supporting not just American-made but American-grown products.” Rajeev Batra, Ph.D., a professor at the University of Michigan’s Ross School of Business, agrees that “transparent manufacturing” is on more people’s minds, especially given reports of factory fires in Bangladesh and abysmal working conditions in China. “We’re demanding greater corporate responsibility and fair trade.” 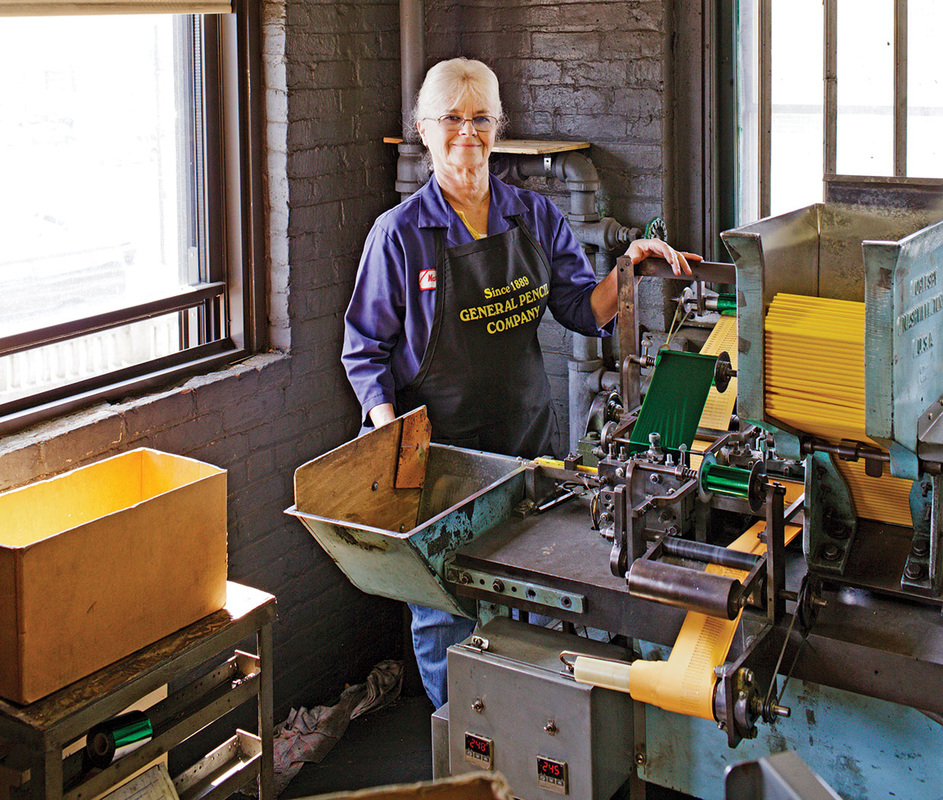 LaKishka Raybon worked for nearly a decade on a Detroit auto-parts line. Then five years ago she was laid off, and the single mother of three lost her home. But since May 2012 she’s been back on the line, making upscale wristwatches for a start-up called Shinola, which is cultivating backyard pride by stamping Made in Detroit right on the watch.

“I was born and raised here,” says Raybon, 36. “The city has gotten so much negative publicity, but Detroit stands for quality and hard work. To have that stamp on every watch is a reward for me.” 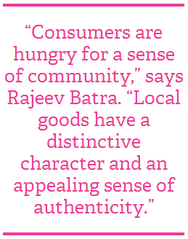 Products with similar “micro-labels” are proliferating. “Made in Arkansas” merchandise is showcased at Walmart stores throughout the company’s home state—and in New York City, the boutique By Brooklyn sells only items made in the borough. Although the Made in the USA label still has cachet, “consumers are hungry for a sense of community,” says Batra. “Local goods have a distinctive character and an appealing sense of authenticity.”

And it isn’t just local buyers who are interested in micro-labels, says the head of Shinola, Heath Carr. “Certain American cities and states are very meaningful to people, who identify with the local heritage even if they don’t live there.” (Think New York City for bagels, Milwaukee for beer, Texas for boots, or California for surfboards.) “Detroit has a strong reputation built around manufacturing quality products, and we wanted to be part of it.”

We Still Make Cars—Including Foreign Ones

For car manufacturers in America, the top is down, the tunes are on, and the speedometer is climbing. June was the U.S. auto market’s best month in six years, and companies like Ford (which has enjoyed 16 consecutive profitable quarters) and General Motors (which is also profitable again) are feeling the wind in their hair. Ford even recently announced that it will add 1,400 manufacturing jobs at a plant outside Detroit this year. (Last Thursday’s Morning Joe focused on the auto revival in Detroit. See it at joe.msnbc.com.) “During the recession, these companies shed obsolete assets,” explains Shih. “Now, as the economy is picking up and consumers are replacing old vehicles, we’re seeing a lot of growth.” Meanwhile, the new American car company Tesla, based in Silicon Valley, is stealing market share from Mercedes, BMW, and Audi.

Foreign auto manufacturers are also bringing production stateside. According to Libby Newman, a vice president at the American International Auto Dealers Association, about 55 percent of all light vehicles sold in the U.S. through July were foreign brands—but more than half were built in America. In fact, 10 foreign automakers, from Hyundai to Toyota to Mercedes-Benz, now operate 17 production facilities in the U.S., and together they employ an estimated 500,000 Americans at their factories and dealerships.

A reason for the growth in this “domestic-foreign” market: our competitive manufacturing costs. Shih points out that in 2011, the average pay rate for U.S. autoworkers was $38 per hour—in line with Japan’s $37 per hour and well below Germany’s $60 per hour.

The Big Guys are Coming Back

Beyond Apple putting $100 million into its domestic product line, other companies are making investments at home: General Electric says it’s laying out $1 billion for its U.S. appliance business; Walmart has promised to source an additional $50 billion worth of U.S.-made goods in the next 10 years; and Motorola Mobility, which is owned by Google, recently unveiled the first smartphone (Moto X) designed, engineered, and assembled in the U.S.

Some critics say these investments are merely drop-in-the-bucket gestures by hugely profitable companies under popular (and, in the case of Apple, presidential) pressure to create American jobs. Others argue it would be smarter to focus on manufacturing ideas than basic goods. But Shih says that even relatively small steps by these corporations spur innovation that will lead to the next generation of economy-driving products. “The ability to produce things is tied to the ability to innovate.”

When Americans Build It, Customers Believe In It 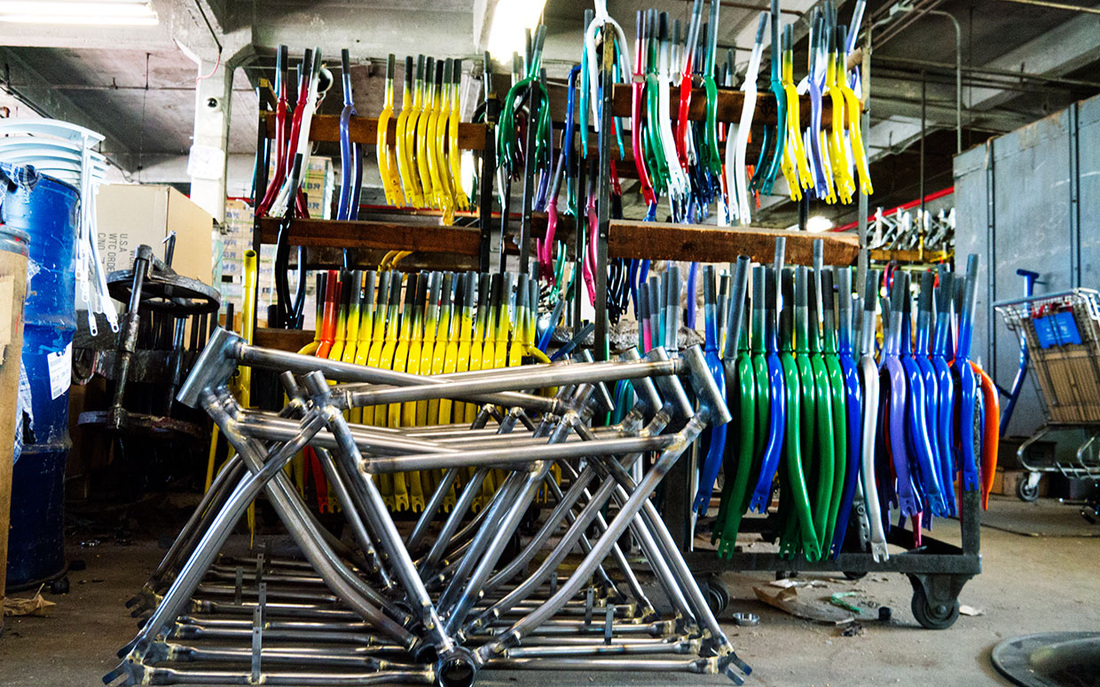 Barbara Gervais and Connie Woods have nearly 40 years of combined experience working in the repair clinic at the Zippo Manufacturing Company in Bradford, Pa. As Zippo has backed its lighters with a “forever guarantee” since 1932, Barb and Connie have found themselves repairing lighters that were struck by bullets (and saved lives), chewed by chainsaws, and even eaten (and expelled) by a hog.

American companies were once renowned for building things to last. (Remember the Maytag repairman?) But as manufacturing went overseas, quality became harder to control, and that promise disappeared or morphed into the oxymoronic “limited lifetime guarantee” or, worse, the extended service contract.

Greg Booth, Zippo’s president, and CEO believes the upfront cost of the warranty is well worth it. “It is one of the major foundations of our company,” which has grown by 50 percent since 2000. Rather than hurting business by discouraging repeat customers, “it makes a powerful statement that we’re confident about what we make.”

“When Shinola opened our Detroit factory, everyone asked what quantity we were going to produce,” says Carr. “But we said, let’s get quality right first. Years ago, ‘Made in the USA’ meant quite a bit, but over time, we lost some of that luster. Now there’s an opportunity to gain it back.”

Labor Day, Made in the USA: An AllAmericanClothing.Com Sales Event The Dirty Job America Must Now Embrace — Closing the Skills Gap
Scroll to top
%d bloggers like this: