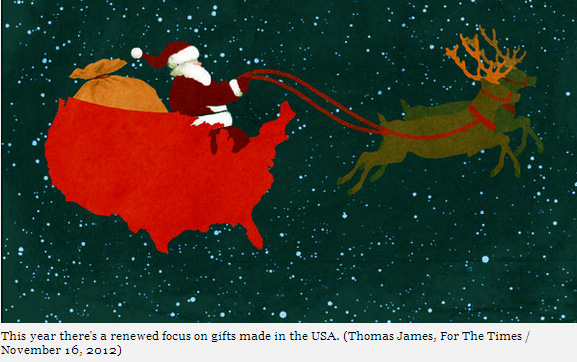 With many shoppers in a patriotic mood after the election, the focus turns to gifts made in the USA this holiday season.
Get ready for a red, white and blue Christmas.
With a sluggish economy, high unemployment and a just-finished presidential election laser-focused on jobs, many consumers say they are more eager than ever to buy gifts made right here in America.

Shoppers don’t have to rifle through stores or flip over labels this year. Many retailers are proudly touting their wares with made-in-the-USA credentials in hopes of wooing shoppers eager to show their patriotism through their pocketbooks.

“Finding presents that are made here makes them special. It’s usually more unique and not something that you can find just in Target,” said Jodi Dirk, 31, of Sherman Oaks. “So if I find stuff this holiday that’s made in the U.S., that’s a big bonus.”

That’s not always an easy task. Industry experts say that 85% of the toys sold in America are made in China and more than 95% of the clothes are produced overseas. Most consumer electronics, too, are assembled beyond U.S. borders. So most of the Hanukkah gifts and presents under Christmas trees this year are likely to be manufactured outside the country.

But not if Yvonne Lopez has her way. The Los Angeles accountant wants to give gifts that are made in America this holiday, and she’s willing to search for them. “If I spend money, I’d rather spend it on a local designer and support the local economy, which is so important right now,” she said.

Across America, experts say, shoppers like Lopez are on the lookout, and stores and designers of all kinds say they are pushing their homegrown roots.

“Consumers care more about products made in the U.S. now, and all of our brandings is crafted around being made here,” said David Koral, co-founder of high-end denim line Koral Los Angeles, which makes all its jeans in Southern California.

Whether you’re a recent convert or a faithful supporter of goods made here, experts offer some creative — and often thrifty — tips to wrap this holiday with stars and stripes.

Finding American-made toys among the sea of dolls, trucks, and games can be a challenge for any shopper. That’s because an “overwhelming amount” of toys are produced in foreign countries such as China, Indonesia, and Mexico, said Jason Moser, an industry analyst at the Motley Fool.

The labor and production costs are usually much lower than in America, he said, and as a result, the price is often right.

A modest selection of U.S.-made playthings can be found at big retailers such as Wal-Mart Stores Inc. and Toys R Us. But parents who are serious about made-in-the-USA toys will have to devote more time to tracking them down.

Simply searching the Internet will turn up an array of toy makers that have been in business for decades churning out kid-friendly items here at home. But think classic toys such as building blocks rather than high-tech ones with remote controls, smartphone apps, and other digital whirligigs.

At Maine-based Roy Toy, co-owner Sue Dennison said shoppers scoop up the company’s wood building sets. Some bestsellers — including a 37-piece kit for a log cabin —- have been produced since Roy Toy was founded in the 1930s.

“In the 1990s, making our toys in America actually worked against us in a lot of ways because everybody was importing from China,” Dennison said. “Now you would be hard-pressed to find a small mom-and-pop store that didn’t have a section of made-in-America toys.”

The 2007 recalls of lead-tainted toys made in China pushed parents to scrutinize where their children’s dolls, model cars, and other playthings came from, said Laurie Schacht, co-publisher of The Toy Insider guide. As a result, some companies moved at least part of their production back home to soothe shopper worries and also burnish their brand’s reputation.

“That big panic was one of the first things that really pushed the button on made in America,” she said.

With safety top of mind, Irene Lopez, 62, of San Pedro is carefully hunting for gifts tagged “made in America.” The homemaker says she worries that her grandchildren might chew or handle toys with toxic components.

“You always want to make sure they’re OK,” she said. “Also, I’d rather get something more unique that can’t be found at every store everywhere.”

Dapper and stylish Americans have been buzzing this fall about fashion created here at home, especially after Ralph Lauren came under fire this summer for outsourcing the manufacture of the Olympic uniforms for Team USA. A surprising amount of clothing sewn in America, and often made in Southern California, can be found at the neighborhood mall.

Menswear designer Joseph Abboud proudly splashes “made in the New America” on its website, while contemporary chain Club Monaco rolled out a Made in USA collection of men’s clothing. High-end label The Row, helmed by actresses-turned-design-moguls Mary-Kate and Ashley Olsen, uses garment factories in New York and California.

Los Angeles is a fashion hub full of designers creating beautiful clothing and accessories appropriate for the season.

American Apparel, one of the biggest local retailers, has a variety of cold weather apparel such as jackets, fishermen’s pullovers, scarves and beanies that can be stocking stuffers or wrapped up under trees. Chief Executive Dov Charney predicted that velvet might even be creeping into menswear soon.

Those looking for pretty frocks for holiday shindigs can try on outfits from a flotilla of Southern California brands such as Single, Karen Kane, and Morgane Le Fay.

Eva Franco designs a Los Angeles brand under her own name that can sometimes be found at Neiman Marcus and Nordstrom. She recently unveiled her holiday collection, chock-full of lace, brocade and sequined dresses priced up to $300. (One of Mitt Romney’s daughters-in-law wore one of the designer’s dresses during Romney’s concession speech, Franco noted.)

Everything is designed in a studio in downtown Los Angeles and then contracted out to local factories, Franco said. “We have people hand-cutting lace flowers and stitching on the flower by hand,” she said. “I’m doing Chanel and Valentino couture in L.A.”

In early December, more than 350 mostly local designers and artists will flaunt their wares at the Unique L.A. Holiday Show in the California Market Center. That’s followed by the third annual Renegade Craft Fair at the Los Angeles State Historic Park on Dec. 8 and 9.

Avenue called Crafted at the Port of Los Angeles just rolled out in San Pedro this summer. Nearly 100 vendors open up booths every weekend — Friday through Sunday — in two warehouses. There are booths galore filled with soaps, gourmet doughnuts and hand-knitted scarves.

Inside one building, Jennifer Priest sells an eclectic collection of home goods under the Hydrangea Hippo brand. For the holidays, she offers glass snowman ornaments, scrapbooks and beer mugs etched with cheerful holiday greetings.

“People are looking for more handmade items because they want unique gifts, but also because of the economy,” the Hesperia resident said. “You can go into any store and buy what’s made in China, but that doesn’t help create jobs here.”

Edibles may be one of the easiest ways to go native — especially in the Golden State, rich with wine, fruit of all kinds and a bountiful assortment of nuts.

“Food is really easy to give in California since the state is pretty much the breadbasket of the United States,” said Joel Joseph, chairman of the Made in the USA Foundation in Los Angeles. “Other gifts take more effort.”

“Pretty much 90% is made here in California, but the rest is from the United States,” spokeswoman Lisa Consani said. “So we have Godiva in New York and Starbucks in Seattle.”

Another option for vino fans: wine memberships. Specialists like the California Wine Club and local shops such as Silverlake Wine will send subscribers two bottles a month with a subscription.

Among the best resources for made-in-America presents, this holiday may be your laptop or smartphone. Searching for “Made in America holiday gifts” brings up millions of links to stores and guides.

Other Web markets such as Etsy, which specializes in handmade or vintage items, function as the digital version of the craft fair. Shoppers can find all manner of inventive and handmade gifts, especially after the recession pushed more out-of-work creative types into crafting goods to sell online, said Matt Stinchcomb, the company’s vice president of brand and social responsibility.

Dave Schiff and two buddies left well-paying ad executive jobs this year to start a flash-sale site called the Made Collection, which specializes in products manufactured in the U.S. He also co-founded an advertising agency dedicated to companies manufacturing only in the U.S.

The Made Collection has the rustic Americana vibe down pat, selling items such as hand-tooled leather bags, flannel skinny ties and guitars. Esquire then came calling — so the site collaborated on the magazine’s December holiday gift guide called “Great American Things.”

It’s all part of the same buy-local movement that has boosted farmers markets into the mainstream and pushed restaurants to source ingredients from neighborhood producers, experts say. Now consumers are increasingly eager to buy a necklace made in Los Angeles or a pair of jeans made in Brooklyn, N.Y., for loved ones this holiday season.

With that in mind, both small businesses and giant companies like Caterpillar Inc. have brought some production back to America. There’s also a wave of laid-off workers who have started their own small ventures baking cupcakes, creating jewelry or designing dresses. Even people not directly affected by the sluggish economy know that buying American-made goods promotes American jobs

“It’s connected to the buy-local movement, but it’s also connected to buying green,” said Joseph of the Made in the USA Foundation, which recently released a 115-page holiday gift guide, “since you don’t have to ship them thousands of miles across the Pacific.”

Schiff of the Made Collection said shoppers are ready for fashionable and luxurious American products. “Now, people are motivated and realize purchases of American-made things can help this country.”

The Revival of American Manufacturing: An UpdateMade In America Has A New Ring
Scroll to top
%d bloggers like this: