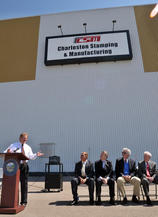 Tomblin said Gestamp’s decision to locate in South Charleston “demonstrates what a willingness to work together” can accomplish. He said building owner Ray Park, the state, county and local leaders and his economic development team “have taken what was once a prospect and made it a reality.”

State Secretary of Commerce Keith Burdette said Park built a long-term relationship with Gestamp Chief Executive Officer Jeff Wilson and one day they were talking about some of the equipment in the plant.Burdette said Gestamp’s site selection consultant had already been talking to others about the company’s need for a plant. “We were the last guys at the dance,” he said.

South Charleston Mayor Frank Mullens said it is his understanding that Gestamp was originally looking at sites in five states. “Then it was West Virginia, Kentucky and Ohio,” he said. “And then it was Ohio and West Virginia.”

Burdette said the deal discussions developed over 30 days and quickly came together in about 10 days.

“I can tell you we wouldn’t have been in this game without a facility like this,” Burdette said. The stamping plant has been vacant for several years. Park has used the period to completely refurbish the plant inside and out. “You can eat off the floor,” Burdette said. “The equipment is virtually ‘out of the box.'”

Kanawha Commission President Kent Carper said, “The difference between West Virginia and Ohio was they (Park and the state) invested and the company can start on day one.”

Tomblin said he toured the plant with Park last Thursday. He said Park missed Tuesday’s announcement because he already had planned a vacation.

Burdette said Wilson missed the announcement because he was in either Singapore or Beijing on Gestamp business.

The proposed South Charleston tax break would require large manufacturers to pay the city’s business and occupation tax at the regular rate during the first four years they do business in the city. But manufacturers that meet employment and gross sales minimums would have the tax capped at $360,000 a year thereafter.

Burdette said the state has offered Gestamp incentives that include assistance with training through WorkForce West Virginia and the region’s community and technical colleges.

Also, the state has offered up to two forgivable loans to help the company defray the cost of moving equipment, he said. “They’ll start with a $20 million (production) line and their goal is to have five or six lines installed.

The state has offered to screen job applicants through WorkForce West Virginia but details haven’t been worked out yet.

The employee pay scale will be “at market with about a 35 percent benefit,” Burdette said. In other words, if an employee were paid $100,000 a year, he or she would receive that amount plus benefits worth about $35,000.

Burdette said original discussions were that Gestamp would lease the plant for 20 years but he believes the final deal calls for a 12-year lease with an option to renew for 12 additional years.

Several years ago when now-Sen. Joe Manchin was governor, the state loaned $15 million to Park’s company. Park invested that money in the plant along with more than $20 million of his own funds. He added a multi-million-dollar line of robots and had the plant refurbished inside and out.

In a prepared statement, Manchin said, “This was a total partnership between private enterprise, state and local government. As governor at the time, I knew we needed to make the investments in the site that would attract a quality employer like Gestamp to South Charleston, and that is exactly what has happened.

“I thank my dear friend, Ray Park, for his vision and belief in our state and its workforce. Ray came to me as governor with his plan to transform the South Charleston site into a world class, state-of-the-art facility — the perfect marriage of technology and our skilled workforce. I made the decision the state would join in partnership by investing $15 million — which I am happy to say has been paid back with interest — and the result of this investment, Ray’s investment, and his confidence in our state as a premier site that has attracted international investment and will put hundreds of people to work.

“These are the types of investments we must continue to make – and the partnerships we must continue to form – to keep our state and our economy competitive,” Manchin said. “I applaud the efforts of Gov. Earl Ray Tomblin, as well as the wisdom and courage of Mayor Frank Mullins and the South Charleston City Council in making today’s announcement possible.”

Sen. Jay Rockefeller said in a prepared statement, “”Here we are again, seeing more good news for our manufacturing sector in West Virginia.

“I am so excited about this announcement and commend South Charleston Mayor Frank Mullens, South Charleston City Council, and my good friend Ray Park for their hard work aimed at attracting a large manufacturer back to the Kanawha Valley.

“I’ve been involved with this stamping plant since my days as governor and I have stood beside the workers through good and bad times during the Mayflower and Union Stamping days,” Rockefeller said. “I couldn’t be happier that it’s on the way to re-opening and adding hundreds of jobs for the Kanawha Valley.”

U.S. Manufacturing, Household Spending Probably Rose Which Logo Would You Choose for The Made in America Movement?
Scroll to top
%d bloggers like this: