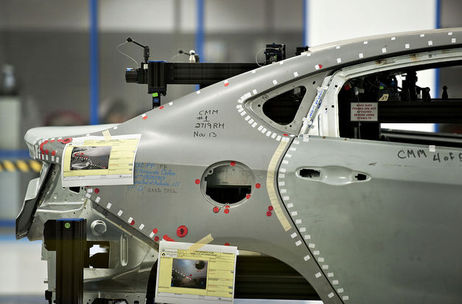 By Lorraine Woellert
To contact the reporters on this story: Lorraine Woellert in Washington at [email protected]
To contact the editor responsible for this story: Christopher Wellisz in Washington at [email protected]
Manufacturing probably picked up in the U.S. in March, showing it is weathering a slowdown in global growth, economists said before a report today.The Institute for Supply Management’s factory index climbed to 53 from 52.4 in February, according to a median estimate of 55 economists surveyed by Bloomberg News. Readings greater than 50 signal growth. Construction spending rose in February, other data may show.
“Manufacturers are benefiting from a variety of positive catalysts, including the need to replace a fleet of motor vehicles,” said Joseph LaVorgna, chief U.S. economist at Deutsche Bank Securities Inc. in New York. “And we just haven’t got back to the previous peak in inventory that should benefit the sector and the national economy for some time.”Increased auto sales, sustained corporate purchases of equipment and inventory rebuilding are underpinning the industry that led the U.S. out of the recession more than two years ago. At the same time, less demand from overseas customers remains a risk for manufacturers, which account for about 12 percent of the economy.The Tempe, Arizona-based ISM’s manufacturing report is due at 10 a.m. New York time. Estimates ranged from 51.7 to 54.5. The gauge averaged 55.2 in 2011 and 57.3 a year earlier.

Also at 10 a.m., the Commerce Department will release data on construction spending. Economists project a 0.7 percent gain after a 0.1 percent January decrease, according to the Bloomberg survey median. Forecasts ranged from a drop of 0.6 percent to an increase of 1.5 percent.

Regional DataRegional reports reinforce the strength of manufacturing. New York-area factories grew in March at the fastest rate since June 2010 and manufacturing in the Philadelphia region expanded the most in almost a year, figures from the Federal Reserve showed.

“We’re beginning to see positive signs that the economy is improving,” Randy Potts, chief executive officer of the Forest City, Iowa-based company, said on a March 15 conference call. “Consumer confidence has been trending higher and the jobless rate is improving.”

Manufacturing shares have outperformed the market. The Standard & Poor’s Supercomposite Industrial Machinery Index (S15MACH), which includes Caterpillar Inc. and Deere & Co., advanced 16 percent since the end of 2011 through March 30, compared with a 12 percent increase in the broader S&P 500.

Auto SalesLight-vehicle sales in March, set for release tomorrow, may have run at a 14.6 million seasonally adjusted annual rate, the average estimate of analysts surveyed by Bloomberg. It would cap the strongest quarter since the first three months of 2008, according to Ward’s Automotive Group statistics.

A report last week showed orders for non-defense capital goods excluding aircraft — a proxy for business investment in items such as computers, engines and communications gear — increased 1.2 percent in February.

Business spending on equipment and software climbed at a 7.5 percent pace in the final three months of 2011 after a 16.2 percent surge in the prior quarter, according to the latest Commerce Department data on gross domestic product.

The growth helps explain why companies like Deere & Co. (DE) are expanding. The world’s largest maker of agricultural equipment said March 1 that it would invest $70 million to expand tractor production in Waterloo, Iowa.

Fed’s BernankeFederal Reserve Chairman Ben S. Bernanke said last week that while he was encouraged by the recent decline in the unemployment rate, a further reduction will probably require a quicker expansion of business production and consumer demand, which “can be supported by continued accommodative policies,” he said.

Recent “better news” on the U.S. economy has also included strength in manufacturing, Bernanke said. The improvement could contribute to higher consumer confidence and lead to a self-sustaining recovery, he said. “We haven’t seen that in a persuasive way yet,” Bernanke said in a speech in Arlington, Virginia.