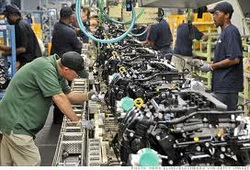 Written by: Jack Hough for The Wall Street Journal
Jack Hough is a columnist at SmartMoney.com
Email: [email protected]

Investors who have favored emerging markets like China in recent years should pay attention to another growing manufacturing center. It boasts plenty of skilled workers; cheap and abundant energy; stable institutions; and a large middle class that likes to shop.

It is the U.S., where a long industrial decline might be in reverse.

In March, manufacturing expanded for the 32nd straight month, and contributed 37,000 of the 120,000 U.S. jobs added, the government reported. That’s partly because of the ongoing recovery from the Great Recession. But the economy is also changing.

Second, a weakening dollar makes U.S. goods more attractive to foreign buyers. The dollar has fallen by nearly one-third over the past decade against a basket of currencies including the euro, British pound and yen.

Third, energy production is booming in the U.S., and domestic natural-gas prices have recently plunged. That gives an edge to U.S. producers of fabricated steel, transportation equipment, machinery and chemicals, which use natural gas extensively, according to a recent report from Citigroup C -2.36% .

Of course, a sudden rise in the dollar or a spike in natural-gas prices or wages could slow U.S. manufacturing gains. But for now, at least, that scenario appears unlikely. Wall Street expects earnings for the S&P 500 industrial sector to rise 13% this year, versus 9% for the broader index.

There are several ways to invest in the U.S. manufacturing resurgence. An index fund that tracks the Standard & Poor’s 500-stock index has a 10.6% weighting for industrials. Investors should try to increase their allocations to about 16%, says Chuck Severson, a portfolio manager at Baird Investment Management.

Mr. Severson prefers U.S. companies that supply manufacturers, because they stand to gain from a broad rise in factory activity. His favorites include Danaher, a conglomerate with an industrial technology division; Roper Industries, whose pumps and valves are used in factories and refineries; and industrial suppliers W.W. Grainer and Fastenal.

U.S. Steel and Nucor are the largest U.S. steelmakers, and analysts say both can reduce their domestic production costs by switching from coal to natural gas where possible.

Jerry Swank, founder of Swank Capital, a Dallas investment firm specializing in energy, says U.S. chemical makers such as Dow Chemical and DuPont should profit from turning natural-gas liquids into materials used in fabrics, pipes, food packaging and other items.

When it comes to U.S. manufacturing, says Kristina Hooper, head of portfolio strategies at Allianz Global Investors, “It’s time to stop looking in the rearview mirror and start looking ahead.”