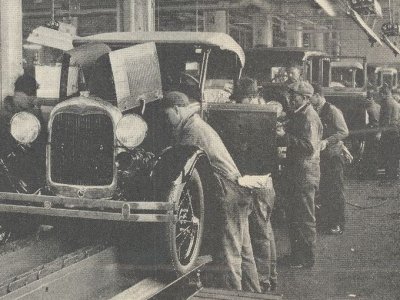 Written by:  Sam Ro for Business Insider – Money Game
Contact:e-mail:[email protected]
Subscribe to his twitter feed
America is making stuff again.The Wall Street Journal‘s Jack Hough wrote an article about the hot new idea economists are buzzing about: the American manufacturing boom.Hough spoke to Bank of America Merrill Lynch economist Neil Dutta who identified three trends that lay the foundation to a coming American manufacturing renaissance.
First, the cost advantages of outsourcing factory work are narrowing. Emerging market wages, while still much lower than U.S. wages, are rising, and high oil prices have made shipping more expensive. That is expanding the range of goods U.S. factories can produce at competitive prices (think sophisticated machines, not toys).Second, a weakening dollar makes U.S. goods more attractive to foreign buyers. The dollar has fallen by nearly one-third over the past decade against a basket of currencies including the euro, British pound and yen.Third, energy production is booming in the U.S., and domestic natural-gas prices have recently plunged. That gives an edge to U.S. producers of fabricated steel, transportation equipment, machinery and chemicals, which use natural gas extensively, according to a recent report from Citigroup.

Bottom line: This is definitely a hot line of thinking across financial and academic circles.

This is your new blog post. Click here and start typing, or drag in elements from the top bar.

More Than 1 Million Manufacturing Jobs Could Be Created in USA if Americans... The Great Reversal: Playing the U.S. Manufacturing Boom
Scroll to top
%d bloggers like this: