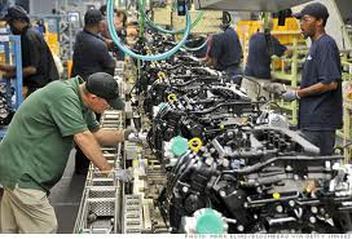 April 15, 2012 12:00 am
By Len Boselovic / Pittsburgh Post-Gazette
Advocates of a strong U.S. manufacturing industry are heartened by the prospects of more companies returning well-paying factory jobs to our shores. Boston Consulting Group forecasts the “reshoring” trend could create 2 million to 3 million jobs by the end of the decade — 600,000 to 1 million in factories and the rest in support industries such as construction, transportation and retail.

The question is: Will there be enough skilled American workers to fill them?

“For reshoring to succeed, we need more intelligent, competent, hard-working, skilled workers,” said Harry Moser, the former CEO of a machine tool producer and founder of the Reshoring Initiative, a Kildeer, Ill., venture that promotes bringing jobs back home.

“There’s a significant shortage of skilled manufacturing workers. The people who have skills and who want to work are working,” he said.

Mr. Moser spoke Friday at an industry conference at Westmoreland County Community College. While he was there, he had the opportunity to see one promising regional initiative that is grooming young people for manufacturing jobs, whether they are home-grown or reshored.

His appearance coincided with the seventh annual BotsIQ competition, where students from more than 40 area high schools and technical schools compete in a robot-building competition. The competition, which was initiated by the Pittsburgh chapter of the National Tooling and Machining Association, develops the math, science and engineering skills that manufacturers require.

Mr. Moser said most high schools do a poor job of developing those skills. Moreover, teachers, guidance counselors and parents do not promote manufacturing as a career choice, he said. That’s a common lament of manufacturing advocates. But the more optimistic among them see signs that the Great Recession may be slowly improving manufacturing’s image.

“This economic crisis really set this country back on its heels. It really made us look at ourselves,” said Cliff Waldman, a senior economist with the Manufacturing Alliance for Productivity and Innovation, an industry-funded research group.

The economist said 2 million manufacturing jobs were lost between December 2007, when economists determined the recession began, and June 2009, when they said it ended. The devastation did not encourage more workers to seek factory jobs, but the 430,000 manufacturing jobs created since then have provided a ray of hope in an otherwise muted recovery.

Mr. Waldman believes the recession not only dulled the enthusiasm of young people for Wall Street careers but spurred policymakers to look for new economic engines to replace finance, construction and retail. Prospects for those industries are not strong, so economic growth is liable to remain lackluster unless new sources of growth can be found.

“Unless we start looking at some sectors we haven’t looked at in a while, including manufacturing, this is going to be all [the growth] there is,” Mr. Waldman said.

Manufacturing jobs are already going unfilled. The research affiliate of the National Association of Manufacturers said last year that 67 percent of the 1,100-plus manufacturers it surveyed reported a moderate to severe shortage of skilled workers. More than half expected the problem to grow worse over the next three to five years.

Kennametal Chairman, President and CEO Carlos Cardoso said in January that 600,000 factory jobs were unfilled because workers lacked the required skills. His remarks, made at a press conference at the National Press Club in Washington, included urging other industrial companies to do a better job of spreading the word that manufacturing jobs are available and that factory work is not the dirty, low-skilled profession many perceive it to be.

Kennametal sponsors a 15-week program with Greater Latrobe High School to introduce students to manufacturing, a program the company plans to expand to other regions where it has operations. The objective is to get students — as well as parents, teachers and guidance counselors — interested while they are in school.

While the rising cost of a college education and the tight job market facing even students with multiple degrees help make manufacturing more attractive, “We need to do more,” said Mark C. Tomlinson, executive director and CEO of the Society of Manufacturing Engineers.

“There needs to be a larger agenda,” he said.

The Detroit-based professional society is working with high schools to implement a curriculum built around math, science and core manufacturing skills that will prepare students for jobs that people who believe in the benefits of a manufacturing-based economy insist will be waiting for them.

“Manufacturing jobs offer them a path for a decent career,” Mr. Waldman said.