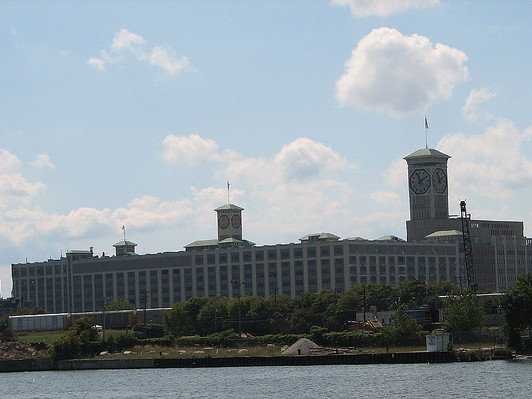 Sophie Quinton
Sailors on Lake Michigan know they’re approaching the south side of Milwaukee when they spot the Allen-Bradley Clock Tower. But the building beneath the tower acts as a marker of another sort: the structure originally built to be a manufacturing plant is now filled with white-collar professionals.
As the global headquarters of Rockwell Automation, the Allen-Bradley building provides office space for 3,100 employees who range from product development engineers to sales and marketing teams and corporate executives. They’re in the manufacturing business, but it’s not quite the same business that once made Milwaukee prosperous.

Rockwell Automation sold over $6 billion worth of industrial control products last year, more than half of those outside the United States and over one-fifth to emerging markets. Some 61 percent of its 22,000 employees are based outside the U.S. While 58 percent of last year’s sales were in manufactured devices, 42 percent were in computer hardware, software and communications components.

Take a close look at Rockwell Automation, and you’ll understand why the modern manufacturing industry manages to be both a tremendous economic driver and a tough business in which to get a job. It’s becoming standard for many manufacturing companies to require employees to have college degrees–and some jobs require a PhD. Factory-floor openings are scarce and often require specific credentials. A company like Rockwell Automation creates wealth and jobs all over the world, which is great for the world–and for shareholders– but not always so great for Milwaukee. The city’s number one economic problem is a lack of middle-income jobs, and no industry has yet emerged to replace the jobs the traditional manufacturing sector used to provide.

Rockwell Automation still has a production facility in the Milwaukee area, at an industrial park in a suburb called Mequon. Here, machines print circuit boards embedded with microprocessors containing software coded by Rockwell developers. The circuit boards are then fitted into variable-speed drives, electric motors built to carry specific loads as efficiently as possible. Workers assembling the drives are as likely to spend their shifts peering at data on a computer screen as they are wielding drills.

While the shop floor employs 350 people, the facility also houses 750 workers whose jobs range from marketing to procurement to engineering. The presence of higher-level expertise makes this facility a hub for service and repair work. “We love it because when we have a problem on the shop floor, I can grab an engineer by the ear,” says Thomas Groose, manufacturing engineering manager. Most of the folks working on the shop floor hail from the suburbs. “We’re not on a bus line here,” Groose notes.

Manufacturing remains an important sector in Milwaukee, employing some 14 percent of the metro area workforce. In Wisconsin, manufacturing accounts for about 18 percent of state GDP and 93 percent of exports, according to the National Association of Manufacturers.

But the city and the state have seen a steep decline in manufacturing jobs over the past half-century, and the kind of jobs that remain require a higher level of expertise. Between 1961 and 2001, the city of Milwaukee lost 69 percent of its manufacturing positions. Some of that work relocated to suburbs like Mequon. But overall, the seven counties in southeastern Wisconsin saw a loss of 83,000 jobs, according to Vanderwalle & Associates, a Wisconsin economic strategy firm.

Many jobs disappeared altogether, as high-tech equipment replaced manual labor. The jobs that remain increasingly require applicants to present a two-year degree or a specific certification. Today, fewer than 40 percent of U.S. manufacturing employees have jobs in actual production, according to the Congressional Research Service. The loss of manufacturing jobs had devastating impact on Milwaukee. Like other post-industrial cities, Milwaukee has suffered decades of economic decline and a spike in inner-city unemployment. Today, the city of Milwaukee has the lowest employment rate for working-age African-American males of any city in the country–worse even than Detroit, according to research from Professor Marc Levine at the University of Wisconsin-Milwaukee. The manufacturing jobs that remain are largely suburban and inaccessible by public transportation, putting them out of reach for the population that needs them the most.

Making factories more productive is Rockwell Automation’s business, and executives there find the media focus on job loss frustrating. “We’d like you to start talking about output, and judge manufacturing based on how much stuff we make, not on how many jobs,” says John Bernaden, director of external communications. He points to figures illustrating a 15 percent productivity increase in American manufacturing since 2009 and 16 percent output growth.

Besides, counting manufacturing jobs is misleading, as growth in the sector creates jobs elsewhere, says Michael Laszkiewicz, vice president and general manager of the power control business at Rockwell Automation. “When we make a decision to build a new plant or establish a new product line, and we add new people in manufacturing, for every ten manufacturing jobs we add five or six jobs in the supply chain supporting manufacturing,” he says, including other transportation and service jobs.

“When I look at our economic challenges and the need to reduce unemployment, I think manufacturing needs to get a priority in terms of regulatory and legislative policy so that it’s encouraged to grow,” Laszkiewicz says.

The problem, from the perspective of the average Milwaukeean, is that when a global business like Rockwell Automation builds a new plant, it could just as easily be in Shanghai or Singapore as in Oconomowoc. The supply chain impact need not accrue only in the United States. More often than not, the spillover benefit is spread all over the world, like the company’s business. And support work in service industries often doesn’t pay workers a family-supporting wage.

Rockwell Automation has achieved great success since taking over the Allen-Bradley Company in 1985, but Rockwell and its peers haven’t brought Milwaukee mass prosperity the way that Allen-Bradley and its peers once did. The fourth industrial revolution may be on the horizon, but right now real wages in the area are flat and unemployment remains high.

Rockwell is still hiring, and it’s still taking on entry-level workers. But the company doesn’t hire just anyone. On the shop floor, the company is seeking high-performing students and workers with technical skills. And for its offices, it needs firmware development engineers. “The bar has been raised,” Laszkiewicz says.