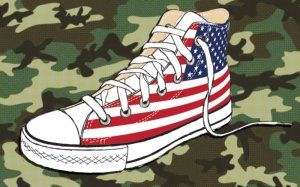 Training shoes, the last part of U.S. military uniforms that isn’t required to be 100 percent U.S.-made and -sourced, could soon go all-American.  How New Balance could be set to profit.

The shoes American soldiers wear when they train for combat may soon be all American made—creating a possible monetary boon for New Balance, a shoe company that has long lobbied for the change.

Federal law requires military service members be dressed in 100 percent American-made uniforms and clothing. One of the exceptions the Pentagon has made to this rule is on physical training shoes: In past years, completely American-made running wear has not been available—but the Department of Defense indicated this spring that it was moving toward offering them.For running shoe manufacturers capable of producing an entirely American-sourced shoe, the policy shift could be big money; being chosen to provide military recruits with shoes could bring in millions of dollars every year. The Air Force spends $2.25 million on sneakers annually, while the Army spends $5.25 million on athletic shoes, according to one report.On Thursday, Pentagon officials met with congressional staff and shoe company representatives to discuss future plans. Representatives from shoemakers Saucony, Asics, New Balance, and Adidas were among those in attendance.New Balance manufactures some 75 percent of its shoes abroad but has maintained manufacturing facilities in Massachusetts and Maine despite industry trends that have shipped similar jobs overseas. The Boston-based company is among a small number of firms, including Michigan-based Wolverine World Wide, which owns Saucony, that are strategically placed to manufacture all-American sourced and produced shoes.

“It’s going to be a big win for the shoemakers that end up benefiting from this. Ultimately, we’re creating more jobs for Americans who need to be working.”

New Balance has been pressing the Pentagon on the military training shoes issue since at least 2010, with help from sympathetic lawmakers hoping to bring business to their districts. Over the past few years, the company has spent about $500,000 on lobbying efforts in Washington, D.C., much of it going toward persuading members of Congress to cajole the Pentagon into a footwear policy change.

“This is a way to demonstrate our support for a company that is committed to manufacturing in this country,” Rep. Niki Tsongas (D-MA) told The Daily Beast. “There is also the strong feeling that when soldiers go to fight on our behalf, they should proudly wear American-made products.”

Tsongas and Rep. Mike Michaud (D-ME) have led the charge for an all-American recruit shoe in Congress. The Maine congressman even presented Defense Secretary Chuck Hagel with prototype New Balance shoes that were entirely produced in the United States.

“It’s going to be a big win for the shoemakers that end up benefiting from this,” said Michaud spokesman Dan Rafter. “Ultimately, we’re creating more jobs for Americans who need to be working.”

New Balance is not lobbying for the Pentagon policy change purely for profit, said Matt LeBretton, a spokesman for the company.

“We’re not doing it out of charity, but this is not strictly a money play,” said. “The bottom line is that there are other ways for us: If we wanted to squeeze every [cent of] profit, this would not be what we’d be doing.”

Still, a report prepared for Congress earlier this year warns that requiring entirely American-sourced and -manufactured shoes could draw criticisms of protectionism.

“Some policy makers believe that policies like the Berry Amendment contradict free trade policies, and that the presence and degree of such competition is the most effective tool for promoting efficiencies and improving quality,” the report says.

But New Balance pledges that it will take the hit for any additional per-unit cost that comes from making an all-American shoe.

“We’re willing to take less margin, less profit when we sell it to the military…If you want to play in this space, you’re going to have to be willing to make certain sacrifices,” LeBretton said.

Tesla Finds Home in Nevada Made in America: Why American Giant Didn’t Want to Build Factories in...
Scroll to top
%d bloggers like this: