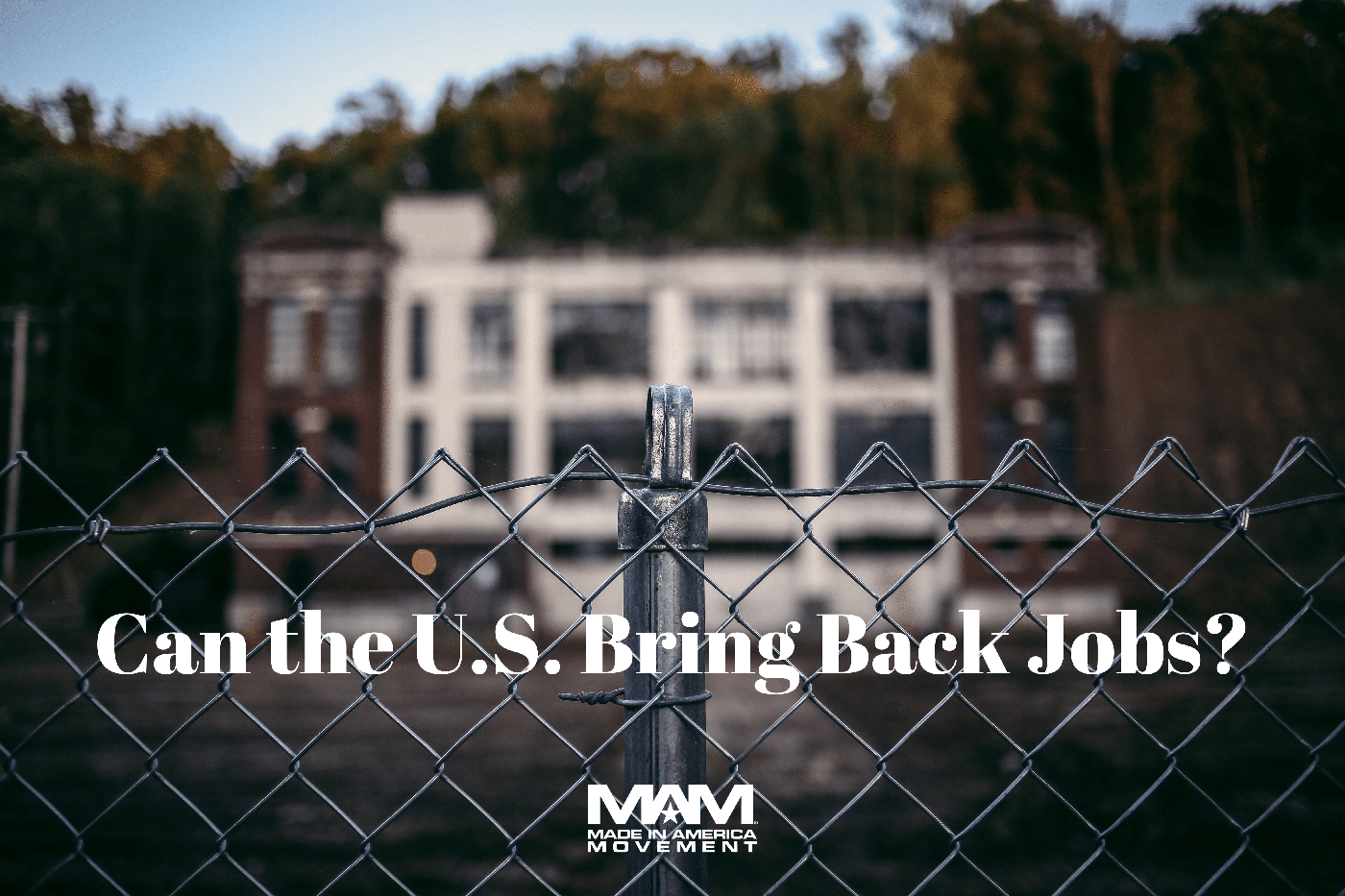 Throughout the 2016 election cycle, one of presumptive GOP nominee Donald Trump’s most impassioned – and oft-repeated – promises should he move into the White House next year is the recovery of millions of jobs previously offshored to China, Mexico and elsewhere.

The rhetoric has struck home with Americans across the country – particularly those currently or formerly employed in the embattled U.S. goods-producing and manufacturing sectors, who have repeatedly borne the brunt of corporate efforts to move work overseas.

[RELATED: Our Made in America Roundtable with the President at the White House]

“I’ve sold capital equipment almost all of my life, and I’ve seen competitor after competitor shutting down,” says Harry Moser, founder of the Reshoring Initiative and former president of machine-tool maker GF Agie Charmilles. “Customer after customer – the companies that we sold to – were disappearing.”

Moser has experienced the effects of offshoring firsthand. His father and grandfather once worked at a sewing machine factory in Elizabeth, New Jersey – a plant where Moser worked during his summer vacations and which has since been shut down as a direct result of offshoring.

[RELATED: Ask an Economist: What’s Going On With the Job Market?]

Though Moser spent the bulk of his career in machinery sales, in 2010 he founded the Reshoring Initiative, which serves as a manufacturing-focused advocacy organization that helps advise globalized companies on the cost-effectiveness of moving jobs to and from the U.S.

Through his outfit’s research, Moser estimates the U.S. is now losing about as many jobs to offshoring as it’s recovering each year – and that millions more could be up for grabs.

U.S. News recently spoke with Moser to hear his take on what can be done to bring jobs back to the U.S. – and whether the 2016 presidential candidates actually know what they’re talking about. Excerpts:

The Reshoring Initiative compiles a lot of data related to offshoring and reshoring efforts. It looks like the U.S. finally reached a break-even point in 2015, right? 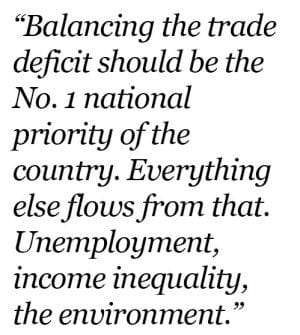 Exactly. Actually, we did that in 2014 and 2015. And it’s important to recognize here that we include reshoring and FDI – foreign direct investment. So if GM had been making something in Mexico and then makes it here, that’s reshoring.

If Mercedes had been making something somewhere else and builds a factory and makes it here, that’s foreign direct investment. But in both cases, they do it because they believe that it’s more profitable for them to produce in the market and supply the market than to just ship to the market. What counts is where it’s made, not who owns it.

We’ve gone from net losing somewhere around 200,000 manufacturing jobs a year to net breaking even. And people will say, “Oh, you have this whole initiative and all this research and President [Barack] Obama talks about it, and you can’t bring back more than you lose?” And I say, “Well, it’s a hell of a lot better than losing 200,000 jobs every year.” We think we haven’t won the war, but we’re starting to win some of the battles.

What drove – and what continues to drive – jobs away from U.S. soil?

Low wages were the major driving factor. You might say, “Why did this company leave Connecticut and go to South Carolina?” Lower wages. “Why’d they leave South Carolina and go to Mexico? Why’d they initially go to Japan and then China or Taiwan or India or somewhere around there?” Generally speaking, lower wages.

There are also hungry workers. There are stories about Apple. When they were about to release one of the phones, they changed their mind and wanted a different glass. And Foxconn, who does a lot of their work over there, agreed and got the material. They rang the bells in the dormitories, and the workers got up at midnight. They gave them a cup of tea and told them what they needed to do, and they started doing it.

Imagine that here. It might be thousands of workers we’re talking about. How would you reach them? What would the union say? The workers would say “Oh, come on. This is crazy.” It wouldn’t work. The workers are hungrier because they’re poorer. Americans were hungry 100 years ago. But the 5th and 6th generation Americans are a little spoiled.

There’s also subsidies by the governments over there. The Chinese, especially, worked very hard to get specific industries to grow. They gave them land, gave them buildings, did whatever to make it happen. They had subsidies on certain products, looser regulations on pollution.

The shipping costs, in general, over the last 50 years, have gone down. And some of the countries, especially Japan and China – and Germany now with the euro – buy U.S. bonds to keep the dollar high and their currencies low. One of the reasons their wages are low is because their currency is low. On the U.S. side, the dollar is consistently way too high.

I think people hear about offshoring and think it just impacts low-skill, low-wage manufacturing jobs. Is that the case? What types of jobs are typically offshored?

The entire range, except for maybe the top 5 or 10 percent of the most precise, most exacting, most customized. China can’t do that top 5 or 10 percent, but Germany and Switzerland and Japan can, and they’re maybe just as good or better at it than we are.

There’s one school of thought that the U.S. will never be able to recover all of the jobs that have gone overseas because automation has phased out certain types of positions. What’s your take on that?

Automation, I would say, enables the reshoring of jobs. But if you offshored the work 10 or 20 years ago, everything in the U.S. has become more productive. If you make the same amount now that you made 20 years ago and made it with 100 people, the Chinese are probably using 300 people. And when it comes back here, you might do it with 75 people. So it won’t be the 100 that you had, but it’ll be a hell of a lot better than zero. And it’ll be less than what China is using.

What can the government do to bring jobs back to U.S. soil? In a perfect world, what kind of legislation would fuel reshoring efforts?

Well, reverse the things that we said were bad. Lower the dollar, strengthen the skilled workforce, get a value added tax, lower the tax rate.

And get companies and MBAs to think about total cost and not just price. In the current world economic situation, with dollar value and skilled workforce and wage rates and tariffs factored in, maybe 25 percent of what’s offshore would come back if companies just did the math properly. To get the other 75 percent back, you have to do the things we’re talking about here.

Renegotiate trade agreements. I keep running into cases where people say, “When I ship to Mexico or Brazil or China, my stuff has a duty of 10 percent on it. And when they ship stuff here, it has a 4 percent duty.” That doesn’t make any sense. In that case, Donald Trump is right. We’ve negotiated [bad] deals.

Back in the ’40s and ’50s, when we were the global colossus, we gave up our market share to help these other countries get their feet back under them, become democracies, stabilize, do all those good things. We gave up our industrial strength to achieve diplomatic strength, for the good of the world. We were the do-gooders. And that maybe made sense then, but it doesn’t make sense now.

What do you make of the rhetoric around trade and reshoring in the 2016 presidential election cycle? Do those running for office seem to understand what drives offshoring and reshoring and how to bring jobs back?

Clearly, balancing the trade deficit should be the No. 1 national priority of the country. Everything else flows from that. Unemployment, income inequality, the environment. Balancing the trade debt in manufacturing would eliminate half of the federal budget deficit, because more people would be working, more people in companies would be paying taxes, there’d be less of a safety net.

I’m a Republican. If you look at the current candidates, I try to be fair, but I think Hillary has a better grasp of the specifics and the details. If you asked her how big our trade deficit was or how big it is with China, she’d probably know the answer to that. And Trump might not, because he’s not a detail guy. She’s been doing this all of her life.

But I think she’s not really committed to the dramatic changes required. If you look at some of these things – lower corporate tax rates, value added tax, more skilled toolmakers, renegotiating the trade agreements – she might nibble at some of those because Bernie pushed her, but her heart isn’t that committed.

I’m not going to put words in her mouth, but my interpretation is she’s saying those things to keep the unions and the Bernie supporters with her, but her heart isn’t in that.

Trump’s going to pound the table and curse and say, “I got elected to fix this and you’re going to fix this or it’ll be over my dead body.” I hope I’m wrong. I think Hillary’s probably going to get elected. I hope she has a similar resolve. But it just doesn’t sound that way to me.

See the top companies that are verified Made in USA

Neil Armstrong’s Moon Landing Artifacts Are on Display at the Smithso...
Scroll to top
%d bloggers like this: