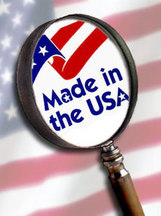 David Paul – President, Fiscal Strategies Group  –  Posted: 02/13/2012 8:30 amApple aficionados suffered a blow a couple of weeks ago. All of those beautiful products, it turns out, are the product of an industrial complex that is nothing if not one step removed from slave labor.

But of course there is nothing new here. Walmart has long prospered as a company that found ways to drive down the cost of stuff that Americans want. And China has long been the place where companies to go to drive down cost.

For several decades, dating back to the post World War II years, relatively unfettered access to the American consumer has been the means for pulling Asian workers out of deep poverty. Japan emerged as an industrial colossus under the tutelage of Edward Deming. The Asian tigers came next. Vietnam and Sri Lanka have nibbled around the edges, while China embraced the export-led economic development model under Deng Xiaoping.

While Apple users have been beating their breasts over the revelations of labor conditions and suicides that sullied their glass screens, the truth is that Foxconn is just the most recent incarnation of outsourced manufacturing plants — textiles and Nike shoes come to mind — where working conditions are below American standards.While the Apple-Foxconn story has focused attention on the plight of workers living in dormitories who can be summoned to their work stations in a manner of minutes, the story has also become part of the debate about whether the U.S. should seek to bring back manufacturing jobs or should instead accept the conclusions reached by some economists that not only does America not need manufacturing jobs, but it can no longer expect to have them.

Nobel laureate Joseph Stiglitz argued recently that our difficulties recovering from the 2008 collapse are a function of our migration from a manufacturing to a service economy. While this migration has been ongoing for years, Stiglitz has concluded that the trend is irreversible. His historical metaphor is the Great Depression, which he suggests was prolonged because the nation was in the midst of a permanent transition from an agrarian economy to manufacturing, as a revolution in farm productivity required a large segment of the labor force to leave the farm.

The problem with this deterministic conclusion that America can no longer support a manufacturing sector is that it seems to ignore the facts surrounding the decline that we have experienced. In his recent article, Stiglitz notes that at the beginning of the Great Depression, one-fifth of all Americans worked on farms, while today “2 percent of Americans produce more food than we can consume.” This is a stark contrast with trends in the U.S. manufacturing sector. Manufacturing employment, which approximated 18.7 million in 1980 has declined by 37%, or 7 million jobs, in the ensuing years. However, the increase in labor productivity over that timeframe — 8% in real terms — explains little of the decline. Unlike the comparison with agriculture, where we continue to produce more than we consume, most of the decline in manufacturing jobs correlated with the steady increase in our imports of manufactured goods and our steadily growing merchandise trade deficit.

The chart below, based on data from the Bureau of Economic Analysis, illustrates the growth in personal spending on manufactured goods in the United States over the past three decades, and the parallel growth in the share of that spending that is on imported goods. These changes happened over a fifty-year period. Going back to the 1960s, we imported about 10% of the stuff we buy. By the end of the 1970s — a period of significant declines in core industries such as steel and automobiles — this number grew to over 25%. As illustrated here, the trend continued to the current day, and we now import around 60% of the stuff we buy. 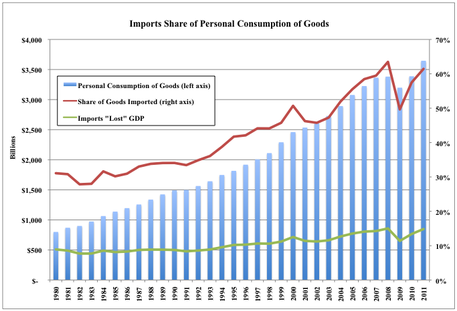 Over the same timeframe, as illustrated below, the merchandise trade deficit — the value of goods we import less the value we export — exploded. By the time of the 2008 collapse, the trade deficit in manufactured goods translated into 3.5 million “lost” jobs, if one applies a constant metric of labor productivity to the value of that trade deficit. 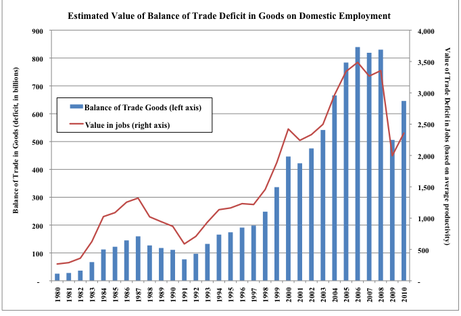 This is where Stiglitz’ comparison with the Depression era migration from an agrarian economy breaks down. As he duly notes, the economics of food production has changed, and today America’s agricultural sector feeds the nation and sustains a healthy trade surplus as well, with a far smaller share of the American workforce. In contrast, the decline in manufacturing jobs reflects the opening of world labor markets. Unlike agriculture, we are not self-supporting in manufactured goods, we have simply decided to buy abroad what we once made at home.This shift has been embraced across our society. For private industry, outsourcing to Asia has been driven by profit-maximizing behavior and the pressures of surviving in competitive markets. For consumers, innovations in retail from Walmart to Amazon.com have fed the urge to get the greatest value for the lowest price. And for politicians — Democrats and Republicans alike — embracing globalization was part of the post-Cold War tradeoff: We open our markets, and the world competes economically and reduces the threat of nuclear conflict.

The notion that American industry, consumers and politicians were co-conspiring in the destruction of the American working class was a discussion relegated to the margins of public discourse, championed among others by union leaders, Dennis Kucinich on the left, Pat Buchanan on the right and Ross Perot, while largely dismissed by the mainstream media.

While Apple has been pilloried from National Public Radio to the New York Times for its effective support of a slave economy, most electronics consumer goods are now imported. The irony of the Apple story is that the Chinese labor content may well not be the cost driver that we presume it to be. As in many other industries, the costs of what is in the box can be a relatively small share of total costs, when product development, marketing, packaging and profits are taken into account.

This, of course, is why China is not particularly happy with their role in the Apple supply chain. When the profits of Apple products are divided up, far more of it flows to Cupertino than to Chengdu. And that is the reality of modern manufacturing. Based on National Science Foundation data on the value chain of the iPad, for example, final assembly in China captures only $8 of the $424 wholesale price. The U.S. captures $150 for product design and marketing, as well as $12 for manufactured components, while other nations, including Japan, Korea and the Taiwan, capture $76 for other manufactured components.

If anything, the NSF data — and China’s chagrine — reflect a world in which the economic returns to design and innovation far exceed the benefits that accrue to the line workers who manufacture the product. This is one part of the phenomenon of growing inequality, and would seem to mitigate the complaint that is often made that America no longer “makes things.” We may not make things, but we think them up and as the NSF data suggests, to the designers go the spoils.

Yet there is no fundamental reason that the decline in man
ufacturing jobs in America should be deemed inevitable and permanent. For all the talk about the number of engineers in China, the fundamental issue remains price. As a friend who is a consulting engineer who works with Apple in China has commented, “Yeah, they have engineers, but the driver is cost, cost, cost. And the labor quality is awful. We lose a lot of product and have to stay on top of everything, but at $27 per day, you can afford a lot of management.”

This argument conflicts with Stiglitz deterministic thesis. Just as manufacturing jobs left the United States, they can come back as economic conditions change. As wage rates rise in other countries, one competitive advantage of outsourcing shrinks. And if nations — from China to Taiwan — migrate away from their practice of pegging their currencies to the dollar, foreign currency risk exposure will offset some of the cost advantages of outsourcing. And today, as newly industrialized nations like Brazil have seen their own manufacturing sectors ravaged by mercantilist competitors, there is a growing understanding for the need for order and fair rules to govern the forces of globalization.

The Apple-Foxconn affair spooked consumers of Apple products — at least for a news cycle or two. Like Claude Rains in Rick’s Cabaret, we were shocked to confront the reality of labor conditions in China. But the story was less about China than about us. That Foxconn could put eight thousand workers to work within thirty minutes to accommodate a last minute design change by Steve Jobs was not — as Jobs suggested in a meeting with President Obama — an argument for why those jobs could never come back to America, but rather it was illustrative of the astonishing narcissism of the Apple world.

It is true, no American factory could deliver for Apple as Foxconn did. But on the other hand, there really was no need to. That story was less about what Foxconn could deliver than what Foxconn’s customer had the audacity to demand.

This story raised the question of whether we care where our products are made. The answer is unclear, however many Americans have long cared about purchasing cars made in this country, and Clint Eastwood’s Super Bowl ad has raised awareness of this question. What is clear is that if Americans care about where their products are made, companies will care. Therefore, even as the president promoted tax credits for insourcing — the new word for bringing those jobs back — perhaps another step would be to build on the power of choice. Perhaps not all Americans care where their products are made, but many certainly do. But even if one does care, it tends to be difficult to find out.

Perhaps a simple step would be for companies to provide that information to consumers. Even if it was voluntary labeling, knowing who chose to provide information to their customers would tell many of us all we need to know. Then we could find out whether the Apple story really changed anything, and whether consumers might be willing to take more into account that the last dollar saved if it enables us to sustain a diversified economy into the future.

What do you think, Can Manufacturing Jobs Come Back?

Buy Made in USA Products – Yes, it Matters#POTUS Gets Made in Maine New Balance Sneakers
Scroll to top
%d bloggers like this: