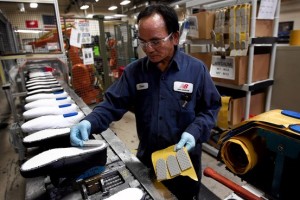 The assembly line at a New Balance factory in Boston in 2012. Associated Press

New Balance—the iconic U.S. sneaker maker—has long marched to its own drummer on “Made in USA” labels.

Are New Balance Shoes Considered Made in USA?

About a quarter of the shoes New Balance sells in America are churned out of the company’s five New England factories, an oddity at a time when 98% of the shoes sold in the U.S. are imported.

But New Balance also acknowledges that only about 70% of the value of its Made in USA shoes reflects domestic content and labor. The outer soles, for instance, are imported from China, apparently clashing with what the U.S. government says can be labeled “Made in USA.” The Federal Trade Commission states that a product has to be “all or virtually all” made in the U.S. to qualify. And in the 1990s, the FTC brought an enforcement action against New Balance over its claim.

That set off a contentious legal battle that still resonates in U.S. manufacturing. The FTC eventually dropped its action against New Balance’s use of the label on shoes from its U.S. factories while simultaneously reiterating the agency’s “all or virtually all” standard. Critics say that has sown confusion.

“We look at the New Balance shoe case as clear proof that the federal law is not being enforced,” says Richard Holober, executive director of the Consumer Federation of California. California has a state standard that requires products must be 100% U.S.-made in order to qualify for the label.

Mr. Holober says his group has fought bills to set a percentage, such as 70% or 75%, for calling something American made as well as “conformity bills,” which would make California’s rule harmonize with the federal standard. “We fought that on the belief that the federal law is not enforced and we can do better,” he says.

Transparency is key for New Balance

New Balance says it isn’t misleading consumers because it always includes tags that spell out the company’s 70% threshold. “We’re very clear about what we consider to be ‘Made in USA,'” says Matthew LeBretton, a company spokesman, who adds that the shoemaker has never been sued in California.

John Donboli, a San Diego attorney who has represented California consumers in class-action cases against manufacturers of other goods, says he hasn’t looked at New Balance closely. “There’s probably a lawsuit there, but I haven’t had a client buy New Balance shoes and bring a case to me,” he says. “It’s my sense that they came up with their own standard, and that’s their effort to [provide] corporate disclosure.”

Do you agree with New Balance?  Should the FTC get involved?  Would you purchase New Balance shoes? Here is a list of Made in USA New Balance Shoes

we found on Amazon. The list might contain some shoes Made in USA with domestic and imported materials. Always double check listing when using Amazon.