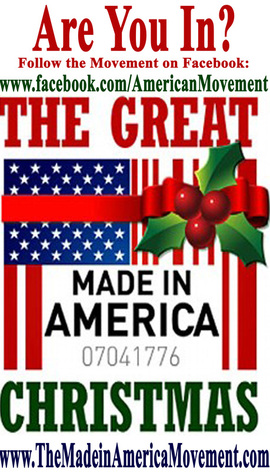 By David Ford
Nov 28, 2012
“World News with Diane Sawyer” is once again asking viewers if they are “in” for “The Great Made in America Christmas.” The holiday installment of the popular “Made in America” series kicks off on Wednesday, November 29 asking families from across the country “are you in?” for creating more American jobs this holiday season by buying more American-made gifts. The National Retail Federation estimates Americans will spend more than $586 billion this year on holiday gifts and goodies –  that’s $750 per shopper. Economists tell “World News” that if we all spent just $64 more on gifts with a “Made in America” label, we could create 200,000 new American jobs.

Reports will air each Wednesday during the month of December as “ABC World News” weekend anchor David Muir scours the country for the best gifts that are made in American towns. Along the way he will introduce viewers to some proud American businesses, the people they employ, and the ingenious products they make.

Viewers who want to join in on “The Great Made in America Christmas” this holiday shopping season can get more information at ABCNews.com/WorldNews.

About “Made in America”
In 2011 “World News with Diane Sawyer” kicked off a special series, “Made in America,” to examine American manufacturing, the economy, and what simple things people can do every day to help power up jobs in this country. “World News” continues to highlight various American businesses that are contributing to their local economies and creating more jobs here in the U.S.

A Documentary Examines the ‘Made in China’ LabelAldermen Say – City Should Buy Milwaukee-Made Goods
Scroll to top
%d bloggers like this: