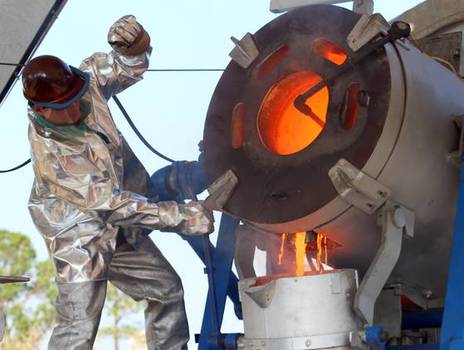 A worker in Gautier, Miss., pours molten metal into a mold on a job site. (Photo: Mike Brantley, AP)

Andrea Kay
Who would have thought that jobs like metal-refining furnace operators and tenders would be making a comeback in the year 2012?

But they are.
Such jobs, done by folks who “operate or tend furnaces … to melt and refine metal before casting or to produce specified types of steel,” as defined by the Bureau of Labor Statistics, have increased 16% from 2010 to 2012 after declining 16% from 2007 to 2009. That’s according to a study conducted by CareerBuilder and Economic Modeling Specialists International that tracked U.S. labor trends and includes data from more than 90 national and state sources.

And that’s not all. Other jobs in manufacturing now seeing a revival that had major job losses in the recession include metal pourers and casters. These people “operate hand-controlled mechanisms to pour and regulate the flow of molten metal into molds to produce castings or ingots,” according to BLS.

One thing is clear: These jobs are related to the types of industries tied to energy, production, technology and transportation.

You can find these jobs at such employers as iron and steel mills and steel product manufacturing and machine shops. They are at manufacturers who make machinery for mining, agriculture, engine and turbines, and plastic and rubber as well as manufacturers that make equipment for companies that make cars, motor vehicle bodies and parts, railroad stock and aerospace.

Yes, the country is “predominantly a service economy,” writes Professor Farok J. Contractor of Rutgers Business School in YaleGlobal Online Magazine. “But the nation is still the world’s biggest manufacturer,” he says, with “unrivaled productivity in terms of manufacturing value-added per employee or per hour worked.”

Among the factors cited for the resurgence is that “jobs once offshored are now returning in industries including automobiles and even unlikely areas like furniture and televisions.”

One of several factors that could inhibit the resurgence is U.S. companies’ lack of an apprenticeship system, he says.

The study also looked at other industries where new jobs have accelerated the most. They are in markets tied to health care and consulting.

Overall, job growth has increased by double digits in the past two years in these industries:

• Internet publishing and broadcasting and Web search portals — a 30% growth.

I know it’s not easy to pick up and move. But if you are wondering where these jobs are, the survey found that the 10 areas with the most job growth are in some surprising places hard hit in the recession such as Detroit and Phoenix.

After a depressingly negative election campaign season in which we were led to believe that the automobile industry was our last vestige of manufacturing and that the rest of our manufacturing had been outsourced to other parts of the world, statistics suggest otherwise.

In fact, they seem to indicate that we indeed are still No. 1 in the world. And that products — and jobs — are still made in America.
SOURCE:  USA Today

Career consultant Andrea Kay is the author of Life’s a Bitch and Then You Change Careers: 9 steps to get out of your funk and on to your future, www.andreakay.com orwww.lifesabitchchangecareers.com. See an index of Kay’s At Work columns here. Write to her: [email protected]. Twitter: @AndreaKayCareer.