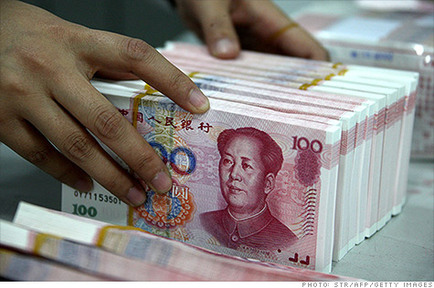 James O’Toole
November 27, 2012
NEW YORK (CNNMoney) — The Treasury Department said Tuesday that China’s currency remains undervalued, but stopped short of branding the country a currency manipulator.
In its semi-annual report on international exchange rates, the Treasury Department said Chinese authorities “have substantially reduced the level of official intervention in exchange markets” since last year, and have “taken a series of steps to liberalize controls on capital movements.”

Critics blame Beijing for holding down the value of its currency, the renminbi, in order to boost China’s competitiveness in international trade at the expense of other countries.

Republican presidential candidate Mitt Romney vowed during the campaign to brand China a currency manipulator, a potential step towards trade sanctions. The Obama administration, however, has avoided this designation.

Treasury said that for China to secure sustainable growth going forward, it needs to increase domestic consumption. Additional renminbi appreciation is a “critical part of this process,” the report said, as a stronger currency increases the purchasing power of Chinese households.

The oft-delayed report was originally scheduled to be published last month.

Join 171,570 other subscribers
At Work: Manufacturing Jobs Returning To U.S.