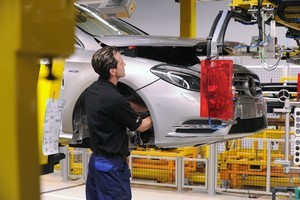 As a whole, the sector is looking up. The Institute for Supply Management’s PMI (Purchasing Manager’s Index — an indicator of manufacturing health) showed positive growth in October for the second straight month as orders increased, production improved, and export demand remained static.

Hidden within those statistics are two curious and surprising success stories.

Chrysler capped off its best October in five years, with sales rising 10% despite the three-day disruption of Hurricane Sandy. (Ford, for example, despite estimating that the storm cost the industry 20,000 to 25,000 sales, reported a small sales increase.) With gas prices declining and consumer sentiment rising, experts expect automotive manufacturers to experience gains into 2013.

The second and even more surprising growth sector is computer and electronics manufacturing. Apple recently announced plans to invest $100 million in building more of its Mac computer components in the United States. Chinese PC giant Lenovo announced in October that it would break ground on a manufacturing center in North Carolina. The facility, Lenovo said, “will be capable of turning out some of Lenovo’s newest and most innovative products, such as the recently announced ThinkCentre M92p Tiny desktop and ThinkPad Tablet 2.”

The facility is expected to create only 115 jobs initially, a tiny fraction of the  2.7 million manufacturing jobs the U.S. has lost to China in the last 10 years alone. But it’s a start. Reasons to shift manufacturing back to the U.S. are many; the “landed cost” — the cost of moving goods from factories to their destination — is rising owing to increasingly expensive fuel and logistics needs. Also rising is the cost of Chinese labor. While still low by Western standards, wages are creeping up in China as they fall stateside.

Both changes are too new and too undeveloped for a pronouncement of recovery just yet, but the attendant factors — increased cost of shipping, rising foreign labor costs, falling wages at home and growing consumer demand — give prognosticators every reason to be cautiously optimistic. Though a victory lap may be premature, it’s possible these could be the first signs of a return to the American industrial economy of decades past.

R-CALF USA – USDA Prepares to Expose the U.S. to an Unnecessary and Avoidable...Manufacturing “Insourcing” to Gather Steam in 2013
Scroll to top
%d bloggers like this: