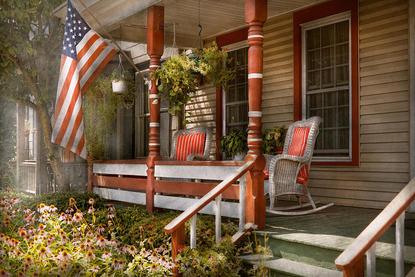 Tim Martin
11/18/2012
On a recent Fox News show, Bill O’Reilly, the rabble-rousing host of the “O’Reilly Factor” stated that President Obama’s reelection was due to “entitlement” voters. He went on to call Obama the poster boy for “progressive secularism,” a movement bent on destroying traditional America and replacing it with dependency and poverty.
Bill’s comments made me wonder: is traditional America really dying? And is our country falling apart because of it? Or is O’Reilly spouting the politics of panic and fear because a free society is becoming more free? Is he hearkening back to a golden era of simplicity that never was?

It didn’t start there, either. Those Chicken Little cries of “The Sky is Falling” started long before President Obama ever arrived on the scene.

When we declared our Independence from England, there were some who said it would be a disaster and was doomed to fail. When we ended slavery, others also declared that it was the end of America. Likewise, when we stopped segregation, gave women the right to vote, and allowed gays to openly serve in the military. They were wrong in all cases, and today we are a stronger nation because of the changes.Despite O’Reilly’s accusations about the president, which include everything from losing the big picture of God and country, to bowing and apologizing to corrupt leaders, to wreaking havoc on society with welfare, abortion and the public school system, to running us off a fiscal cliff with entitlements for the poor, the death of traditional America has little to do with Obama. It has more to do with the wealthy. Ask yourself this: why aren’t tax perks for the rich, agricultural subsidies for mega-farms, $700 billion dollar bank bailouts and lobbyists securing legislation favorable only to the rich labeled entitlements? I don’t know about you, but I call that welfare at the highest level.

The real truth about traditional America, though, is that this country is shifting, not sinking. Someone needs to tell O’Reilly that you can’t run a modern government based on ideals that are hundreds of years old (or thousands, if you believe the Bible). It was once legal to own people, to force employees to work in unsafe conditions, and to not allow women the right to vote. Face it, traditional America was never good for women, Native Americans, African-Americans, Asians, the disabled or the elderly.

It’s funny how quickly we forget the bigotry, homophobia and racism that was so common in our past. Remember the centuries of slavery, followed by segregation, religious intolerance, sweat factories, Salem witch hunts, McCarthy era communism, exploitation of immigrant labor, racism, anti-Semitism, economic oppression of the poor, and the breaking of treaties with Native Americans? If that’s tradition, who needs it?

Bill O’Reilly is cherry picking history. The idealized version of America he envisions is one where white men were the dominant social class, diversity was feared, a person’s worth was measured by the size of their bank balance, and the regulation of a woman’s body by church and state was good. Bill would like to go back to a time when the government, not you, decides who you can and can’t marry. Back to when the votes of minorities and women didn’t count, and where it was perfectly OK for individuals in power to force their beliefs and ideology on others.

I hate to burst O’Reilly’s bubble, but American history is no Norman Rockwell painting.

If you’re searching for traditional America, the best place to look is in the White House. President Obama and the first lady are strong supporters of traditional values of faith, and caring for one’s neighbors and family. They don’t think people should go bankrupt over health insurance or go hungry for lack of food. They want all religious institutions protected, but don’t want them (or the government) to dictate who should have access to contraceptives. The president and his wife believe that the education of our children is important, and that we need to do everything possible to keep them happy and healthy. That’s the kind of America I want to carry forward into the future.

Made In America Has A New RingBangladesh Factory in Fire: WalMart & Disney Among Clients
Scroll to top
%d bloggers like this: