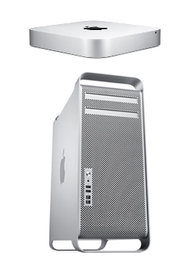 Edward Moyer
December 26, 2012
Dueling reports peg the Mini, on the one hand, and the Pro, on the other, as being the Mac involved in Apple CEO Tim Cook’s comments about bringing some Mac production back to the states in 2013.
DigiTimes thinks it knows. A new report from the Asia-based blog cites “sources from the upstream supply chain” as saying that it’ll be the Mac Mini. Keep in mind, however, that DigiTimes’ reports aren’t always reliable. And then there’s this: Earlier in the month, Fortune’s Philip Elmer-Dewitt laid out several reasons why he thinks it’ll be the Mac Pro.

Elmer-Dewitt notes that Cook mentioned a $100 million investment and that a Bloomberg source, Dan Luria, estimated that such a sum would add up to a factory employing about 200 workers and turning out about a million units of whatever product per year. (Luria studies factory operations as a labor economist at Michigan Manufacturing Technology Center in Plymouth, Mich.)

“Only the Mac Pro and Mini sell fewer than 1 million per year,” Elmer-Dewitt says. And here’s why he casts his lot with the Pro: It’s heavier than the Mini, and thus more expensive to ship from overseas; Pros are, he says, “easier to build and customize than any other Apple product;” and Cook has indicated that Apple will be making a new Pro in the coming year.

So which Mac will bear the “Made In USA” label? That, of course, remains to be seen. It’s interesting, though, to play armchair CEO/COO and begin pondering such logistical questions.
SOURCE: CNET

Manufacturing “Insourcing” to Gather Steam in 2013Apple to Move Mac Mini Production to America: Report
Scroll to top
%d bloggers like this: