At 12pm on July 20th the Vortic Watch Company unveiled their new product, the “Journeyman Series,” at a kickoff event in Kenjo watch store in New York City. The company decided to launch the product by selling pre-orders on the crowdfunding website kickstarter.com, and they hit their $50,000 funding goal in just under 7 hours. The founders are extremely grateful for the support, but they aren’t finished yet! 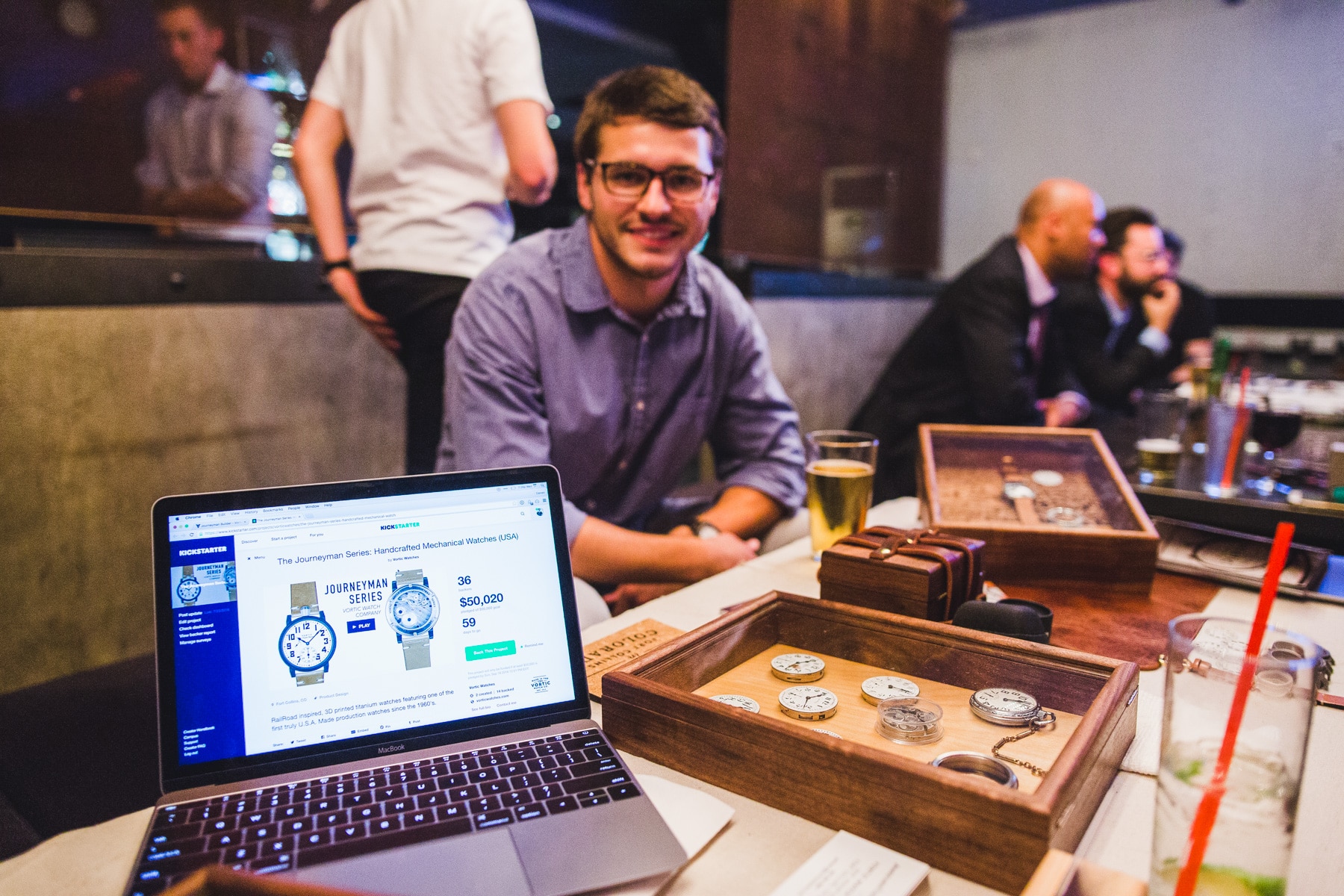 Today, Vortic announced their campaign “Stretch Goals.” Essentially, stretch goals allow Kickstarter companies to add additional value to their pre-ordered products based on achieving funding thresholds. Crowdfunding campaign goals are designed to be a minimum pre-order quantity to begin production, and stretch goals allow companies to incentivize potential backers to continue supporting the project after surpassing those funding goals. Funds will continue to be raised through the Kickstarter Campaign until September 18th.

The founders have decided to create non-traditional stretch goals that support the industry of American manufacturing as well as improve the customer experience. As the makers of the only 100% U.S. Made watch (their first product, the American Artisan Series), the company is extremely invested in protecting the future of American manufacturing. So, at each milestone, Vortic will be creating jobs in the United States and increasing their own in-house capabilities.

The campaign can be found at www.vorticwatches.com/kickstarter 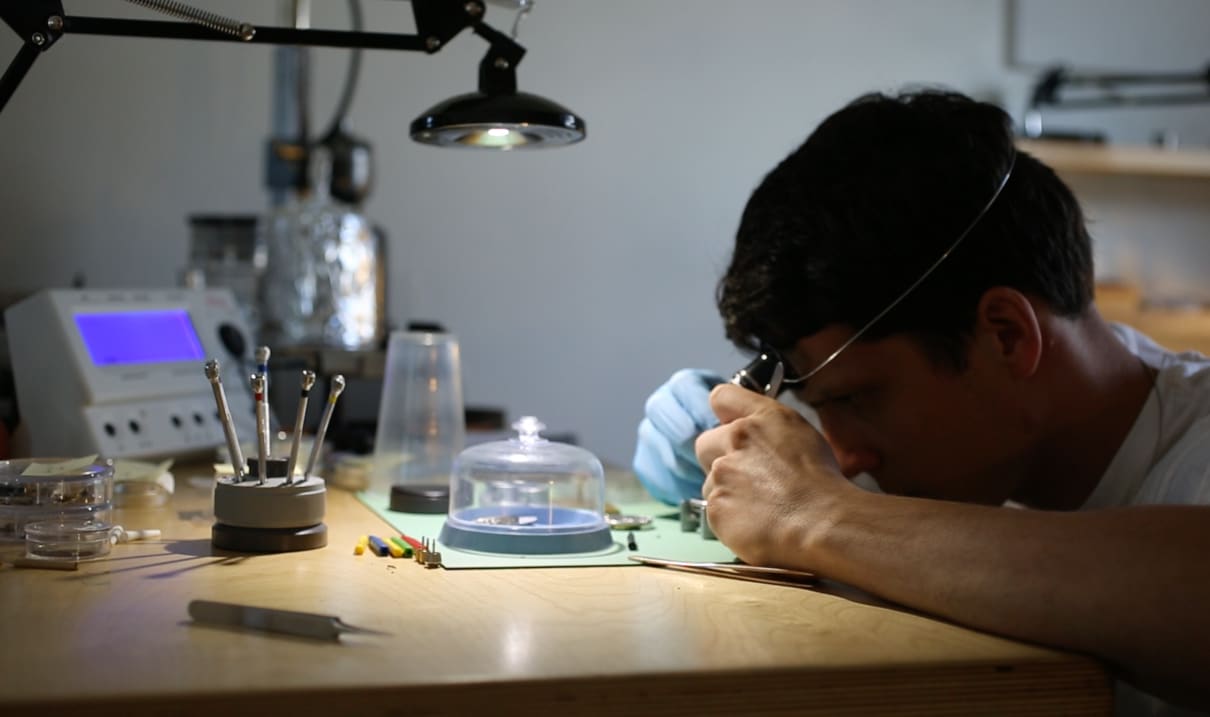 One of Vortic’s watchmakers, Dave, at the bench working on an American Artisan Series movement.

If Vortic doubles their fundraising goal, they will hire an additional associate to help assemble and ship Journeyman Series watches. This will decrease the time between when Vortic receives components from suppliers and when customers receive watches.

If Vortic raises 3.5x their fundraising goal, they will hire an additional associate to help assemble and ship Journeyman Series watches as well as purchase the equipment necessary to produce watch hands in-house. The hands are currently slated to be manufactured in Switzerland, but with more funding Vortic can move this process stateside.

If Vortic raises 5x their fundraising goal, they will hire two additional associates to help assemble and ship Journeyman Series watches as well as purchase the equipment necessary to fabricate the negatives for dial stamps in-house. This will allow Vortic to process the dials faster and give greater ability to add additional styles and colors to their lineup (more customization for customers).

If Vortic raises 8x their fundraising goal, they will hire three additional associates to help assemble and ship Journeyman Series watches as well as purchase the equipment necessary to post process the titanium cases and fabricate the steel case backs in-house. This will allow Vortic to produce these components much faster and increase the ability to closely monitor quality.

The Journeyman Series draws inspiration from the United States’ original great watch manufacturers from which Vortic builds the American Artisan Series (https://vorticwatches.com/aas). This refreshingly classic, yet innovative new line of 3D printed titanium watches is Vortic’s first foray into the world of modern watch manufacturing. The name, “Journeyman,” represents Vortic’s apprenticeship to the craft of watchmaking as well as the literal journey to bring watch manufacturing back to the United States.

The series is comprised of three watch models; the “Manual Wind,” the “Automatic,” and the “Power Reserve.” Every model features RailRoad inspired grand feu enamel dials, titanium 3D printed cases, and full customization using Vortic’s watch builder. The Manual Wind and Automatic models are powered by precision swiss mechanical movements from Eterna Movement Corp (EMC) while the Kickstarter “backers” will also receive bi-weekly project updates as Vortic finishes production set-up and builds the first pieces. Customers who pre-order a watch will get the unique experience of watching the product come to life. Watches can be easily ordered on Kickstarter by purchasing through Vortic’s campaign. Any customer who pre-orders the watch during the Kickstarter timeframe will receive the exclusive pre-order discount and their card will not be charged until the last day of the campaign (September 17th). 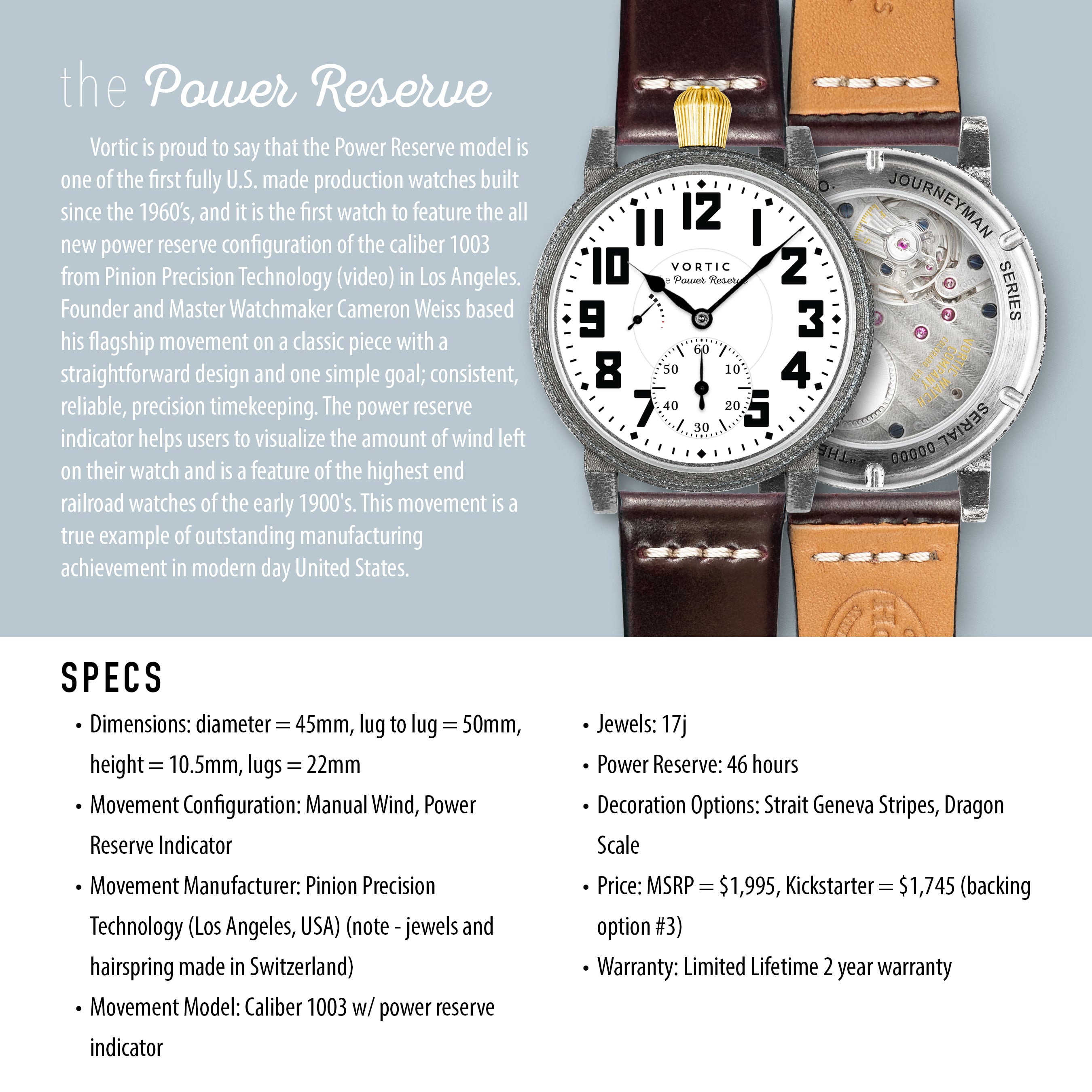 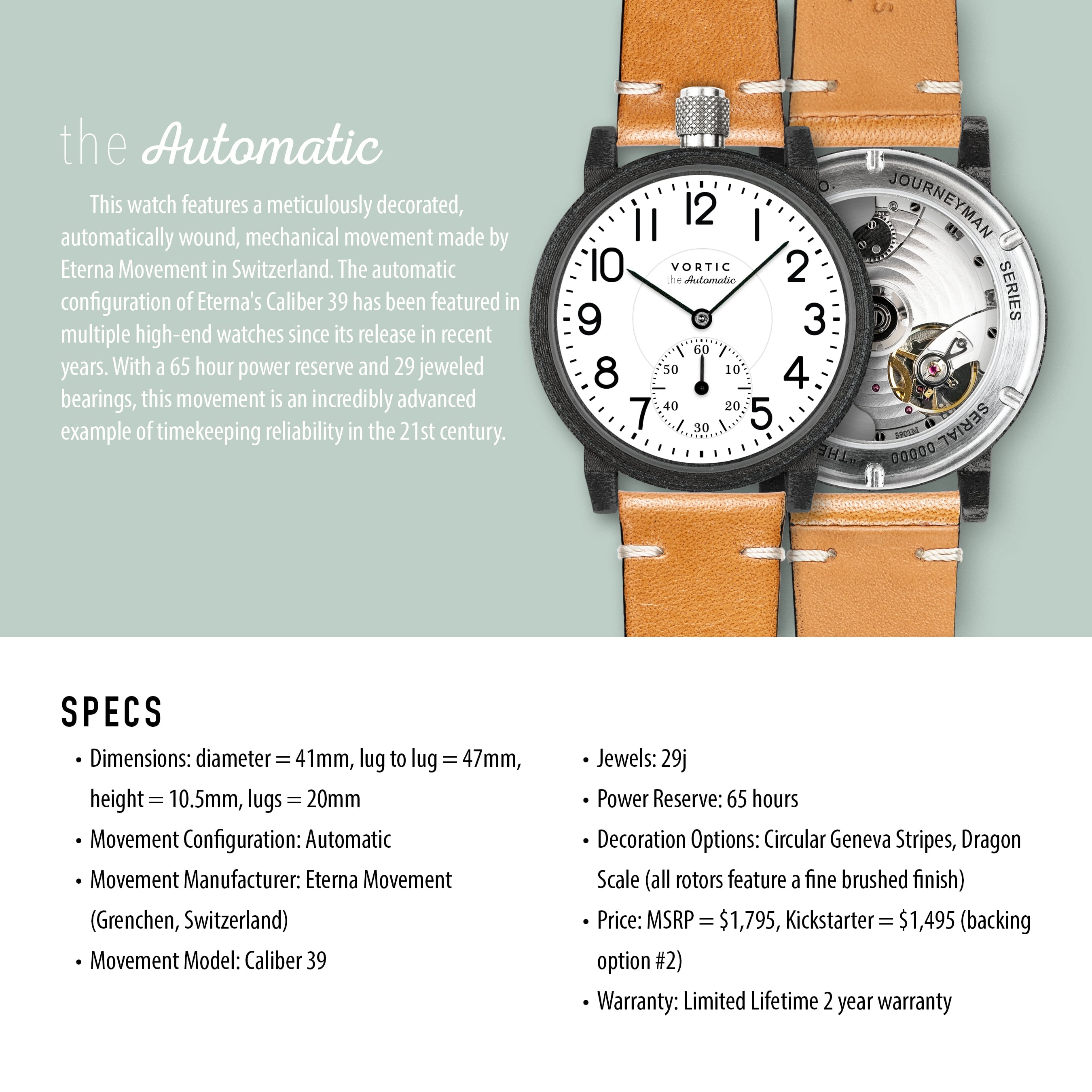 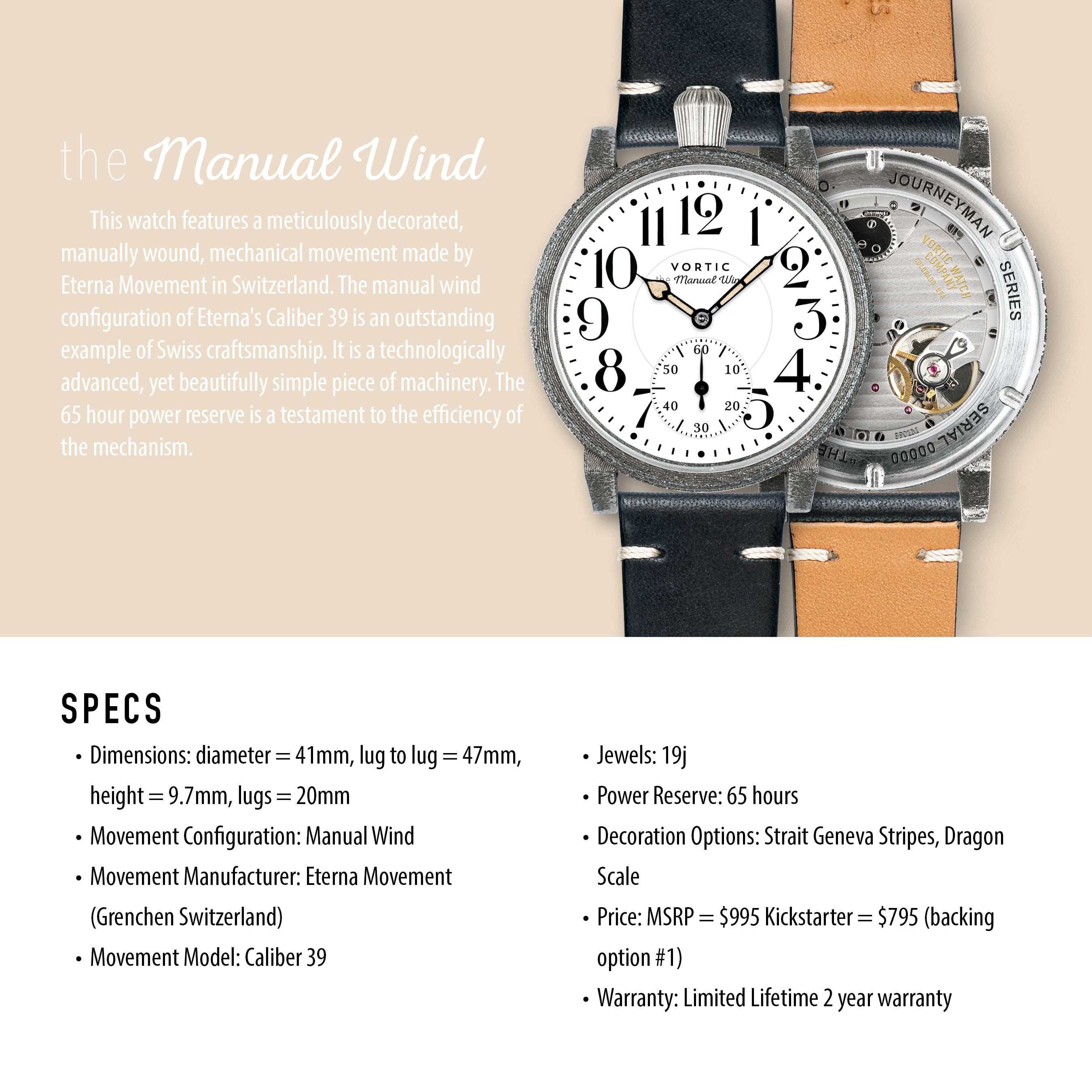 A graphical representation of “How kickstarter.com works”

The idea for a nationwide tour to promote Vortic’s new product lines comes from a fundamental belief that the company’s no-nonsense, transparent approach to manufacturing allows the product to speak for itself. The founders could not think of a more effective way to promote their watches than to literally place them in the hands of potential supporters.

The tour will include stops in cities/towns of the “original” great American watch companies, and will continue south and west through the United States. Events will be held at prominent retailers, breweries, museums, and places of historical relevance. 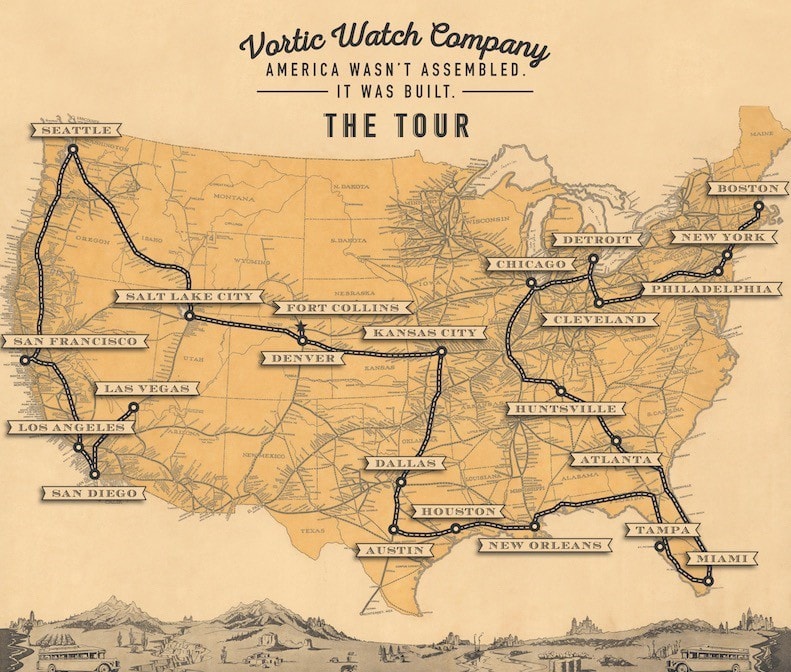 The Official Map of the “America wasn’t Assembled, It was Built” Nationwide Tour

If customers have questions at any time, Vortic’s customer service is available via 855-285-7884 and  [email protected]

Buy American Made: Ways To Express Your Values with Your Pocket Book