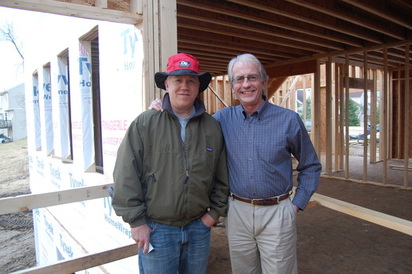 Ann Arbor Firm Constructing Homes with Products Made in America

Homeowner Patrick Schutte (on left) stands with Alex de Parry of Ann Arbor Builders at the site of Schutte’s new Dexter house, which is being constructed mostly of materials made in the U.S.
By Janet Miller  –  Freelance reporter

As Ann Arbor Builders Inc. hops aboard the slow train to economic recovery, the company wants to bring along other American businesses.

But as the phone begins to ring again with inquiries and there is a growing number of signed contracts, de Parry said she and her husband, Alex de Parry, company president, are focusing on building homes with products made in America — with a special emphasis on products from Michigan and Washtenaw County companies.

At the same time, Patrick Schutte had a dream of building his own house from the ground up, getting it just the way he and his wife, Heather, wanted it. But Schutte wanted it to be American-made. That’s when he found Ann Arbor Builders.

The family’s four-bedroom Dexter house will be the first new project built under Ann Arbor Builders’ focus on using American-made goods. Except for the granite countertop, the microwave oven and the recessed lighting, everything will be made in America, down to the nails. Construction started in January, and the family expects to move in this summer.

The project won a few seconds of national attention this week when it appeared on an ABC network news segment about the economy heating up, adding 52,000 new construction jobs in the past two months, compared to 32,000 new jobs in all of 2011.

While the de Parrys had paid little attention to the sourcing of their home building products until a few month ago, it turned out many items already came from the U.S. Still, they knew they could do better.

After they learned from the Boston Consulting Group that 220,000 more new jobs would be created if every builder in the country increased American-made products by 5 percent, they decided to make the effort.

“If everyone did it, it would add up to be a pretty big thing,” Betsy de Parry said.

Alex de Parry, who also serves as vice president of the Builders and Remodelers Association of Greater Ann Arbor and was previously involved in the development of the controversial City Place project on South Fifth Avenue, created a comprehensive list of all the materials that went into building his houses and turned to his suppliers to find out where the materials were made.

“It was a team effort,” he said. “There was no resistance. Everyone knew it was about jobs.”

The nails had come from China, but they found an Illinois company called Maze Nails. Most of the silt (fabric) fencing temporarily installed around the perimeter of the lot to thwart erosion comes from China. But the de Parrys found a company on the west side of the state that manufactures it.

They looked to Ann Arbor’s Fingerle Lumber Co. in Ann Arbor to source U.S. fasteners. While most electrical panels are made in the Dominican Republic, their contractor found a source that uses mostly American-made products. Lumber was a challenge. Most of it came from Canada. But the de Parry’s eventually found a source close to home, buying from a Michigan supplier with Michigan lumber.

Still, a few items were impossible to find. All microwaves, Betsy de Parry said, are made in South Korea. There are no American-made recessed lights. And most granite comes from abroad, mostly from Brazil and Italy.

But there are made-in-America alternatives for countertops, such as Corian by DuPont and Cambria quartz, she said. “If a house doesn’t have a microwave, granite countertops or recessed lights, it can be 100 percent American-made,” she said.

About 95 percent of the materials going into the Schutte house are made in America, Alex De Parry said, with between 20 and 30 percent made in Michigan. Sticking to U.S. products increases costs between 3 and 5 percent, he said, a cost the company absorbs.

The project found its way to a segment by David Muir on Diane Sawyer’s “World News Tonight” after an ABC producer contacted Betsy de Parry via her company’s Facebook page Tuesday afternoon. ABC asked if it could make a “Just Hired” sign and shoot video footage of Alex standing in front of Schutte’s house.

Three hours later, he was on national television. “That kind of national exposure doesn’t do anything for you locally,” Betsy de Parry said. “But he had his nanosecond of fame.”

Janet Miller is a freelance reporter for AnnArbor.com.

Those Manufacturing Jobs Aren't Coming Back You Know, Not EverTool and Die Makers Desperately Casting for Workers
Scroll to top
%d bloggers like this: