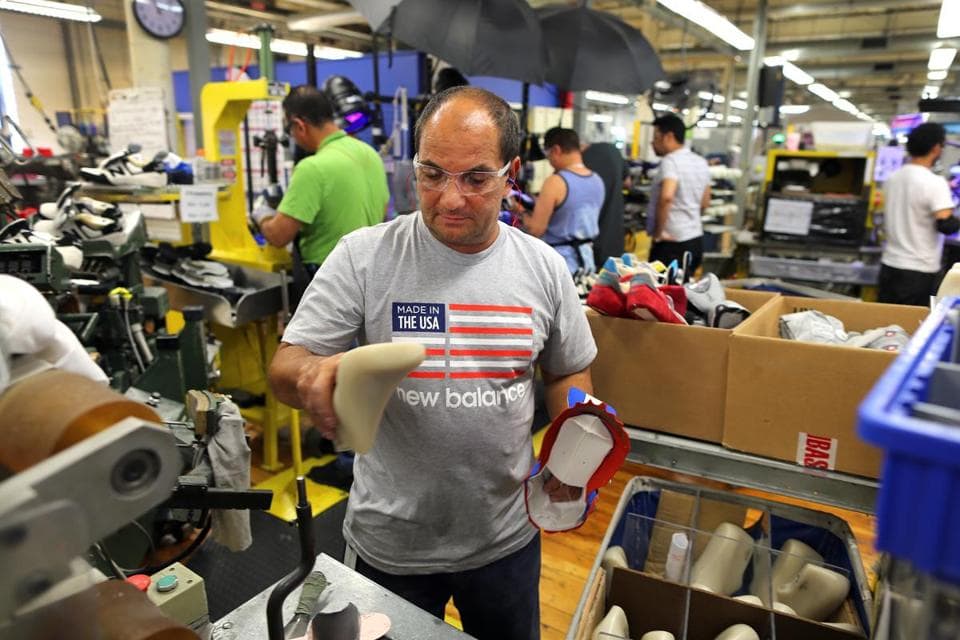 New Balance has been waiting for years for the Department of Defense to buy athletic shoes/sneakers that are made in this country. If US Representatives Niki Tsongas and Bruce Poliquin have their way, the Boston sneaker maker won’t have to wait much longer.

The House of Representatives is poised to approve legislation within the next few weeks that would mandate that the Pentagon apply a 1941 law to the purchase of athletic footwear/sneakers for its recruits. That law, known as the Berry Amendment, requires the military to buy American-made equipment and uniforms. Sneakers have long been exempt, because it was hard to find suitable models made entirely in the United States.

But legislators like Massachusetts’ Tsongas, a Democrat, and Poliquin, a Maine Republican, point to recent efforts by New Balance and others as evidence that sneakers made totally in the United States are now possible. The pair worked to ensure that the legislation was backed last week by the House Armed Services Committee as part of a defense-spending authorization bill for the federal government’s next fiscal year.

“If you’re going off to fight on behalf of our country, you should be wearing items that are made in our country,” Tsongas said.

The committee’s decision follows a move by New Balance a few weeks ago to denounce the Obama administration’s Pacific Rim trade pact, out of frustration with the administration’s failure to purchase domestic sneakers for recruits.

Defense officials had long argued that a lack of domestic manufacturing capacity allowed them not to buy US-made running shoes, and instead issue vouchers for most recruits to pick up training shoes of their choice at base stores.

But two years ago, amid pressure from Congress, the Pentagon agreed to buy US-made shoes if they met certain durability and cost standards, which New Balance assured the agency that its shoes would.

Tsongas said the Pentagon’s failure to order any domestically made running shoes in that time has made congressional intervention necessary.

Asked recently about the delays, a Defense Department spokesman pointed to its durability and cost requirements. Specifically, he said, none of the New Balance sneakers met the price criteria. A spokesman could not be reached for comment on Friday about the new legislation.

The bill, if signed into law, could mean that another 150,000 pairs of shoes/sneakers would be made in the United States for the military, and more workers could join the nearly 1,400 at New Balance’s five factories in Massachusetts and Maine — if the company wins the work.

Tsongas said the lack of orders was caused by the fact the base stores could lose some of their profits if they are required to sell US-made shoes, which tend to cost more to manufacture than foreign-made shoes.

“I don’t think it’s a sufficient reason to go around the requirements of the Berry Amendment,” Tsongas said. “We have some excellent American-made shoes/sneakers available to suit the needs of our military recruits.”

The legislation would replace the vouchers with large contract purchases. The goal, she said, is to leave the base stores out of the equation.

Now that the committee’s work is done, House passage of the bill is widely expected.

The fate of the legislation in the Senate isn’t as clear. The head of the Senate committee handling the issue is John McCain, Republican of Arizona, who has in the past expressed concerns about “buy American” requirements. A conference committee will eventually need to hash out the differences between the House and Senate bills.

Matt LeBretton, vice president of public affairs at New Balance, said that even if the bill becomes law, executives at his company would worry that the Pentagon could come up with ways to try to delay the purchase of US-made shoes.

“But if this passes Congress, it will be tough for the Department of Defense to come back to the Hill and say, ‘We are not doing this,’ ” LeBretton said.

New Balance has been the most outspoken proponent. Its factory in Lawrence is in Tsongas’s district and not far from her hometown of Lowell. New Balance is the only major company that still makes running shoes in the United States, but even those products involve some overseas components. If New Balance lands a military contract through this process, those shoes would be completely made in this country, including at its plant in Brighton.

Tsongas expects other companies to step forward to compete for the military business if the bill becomes law.

The list of likely competitors includes Wolverine Worldwide, parent company of the Saucony running shoe brand. Wolverine would make the shoes in its home state of Michigan, but they would continue to be designed at Saucony’s headquarters in Massachusetts. (That office will soon move from Lexington to Waltham.)

“A lot of this has to do with bureaucratic inertia,” Costello said. “They’ve been doing things a certain way for a long period of time. [But] we’ve got two of the companies that are best at running shoes in the game. Once this is rolling, you will attract others.”

Matt Priest, president of Footwear Distributors and Retailers of America, said his trade group is remaining neutral on the legislation. He has members on both sides of the issue.

While the bill could put more political pressure on the Pentagon to buy US-made shoes, Priest said, two years isn’t necessarily a long time to wait for the Pentagon to make this kind of purchasing decision.

“It takes years to go through this process,” Priest said. “The fact that this is taking a couple years is not anything new or specific to footwear.”