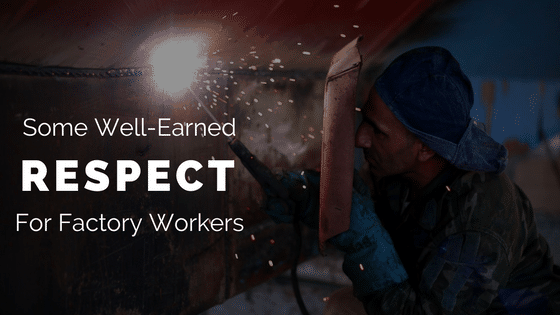 Workers who make things in America always get a lot of love from the lips of politicians. Always. Before Clinton and Trump, there was Reagan, Bill, Bush, and Obama. Because shaking hands with a hard-hat is always a good photo opportunity for an elected official.

The love these workers get is well-deserved. America’s manufacturing workforce play an outsized role in our economy. Even though they represent just 11 percent of the U.S. workforce, they produce most of our exports; their engineers and scientists perform roughly two-thirds of private-sector R&D, and they produce 90 percent of new patents.

They support more jobs in the community than any major service sector occupation.

And they tend to pay better wages than non-college educated peers in other occupations, which means that they spread more money around local stores.

These workers deserve more than lip service. They deserve an economic opportunity, and they deserve respect.

What should that mean for politicians? Practice what you preach.

If you say you love American manufacturing and also put your name on a product, make sure it’s made by American workers.

If you say you love American workers, don’t blame them for our problems.

And don’t say they aren’t skilled enough because workforce training is a shared responsibility.

Look forward, and not backward. Don’t spend all of your time acting stymied by increasing automation and global competition; they’re facts on the ground, and they’re nothing new. Do you want to see countries with walls? Look at North Korea, and you’ll get a taste.

Here’s what we really need to figure out: How do we capture more of the global economic pie on behalf of American workers, and how do we shape the rules so that we have a level playing field? Current efforts to shape that playing field seems to be misguided. And it’s not enough to just say “no” to trade.

Finally, more politicians would do well to acknowledge all workers, around the world, should be treated with dignity and respect. Chinese and Mexican workers aren’t responsible for American job loss. Policies set by governments and corporate decision-making play a far larger role.

Workers aren’t only the often unacknowledged foundation of our economy, they’re what makes democracy everywhere vibrant. It’s time to respect and work for them; not just on Labor Day.

The History of Labor Day

5 Things I Wish I Knew When I First Started Out: Chuck Cain
Scroll to top