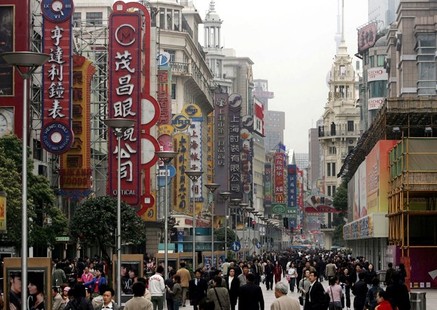 A series of steps by China in recent weeks is encouraging U.S. officials that Beijing is proceeding with changes to currency and other financial policies that the two countries have long disputed.

Chinese leaders have moved to free up trading of their currency, the renminbi, and offered high-level criticism of state-owned banks. At the same time, China has seen a sharp reduction in the surplus its runs with the rest of the world in trade and financial flows.

“The cumulative effect of what China has done is very significant and very promising,” Treasury Secretary Timothy F. Geithner said Wednesday in a talk at the Brookings Institution. “It signals a continued commitment by Chinese authorities to a broad change” in economic strategy.

Analysts at the International Monetary Fund have also been struck by the recent drop in China’s traditionally vast current account surplus with other countries. In a recent study, the IMF said that some of the factors behind this change are likely to be long-lasting and suggest that China is undergoing an economic evolution similar to those in other industrializing countries. For instance, as the Chinese economy develops, its products are becoming more expensive on world markets, reducing the country’s edge as an exporter.

“Domestic costs are rising, the costs of imported inputs have risen, and the effects on trade created by China’s accession to the [World Trade Organization] may be waning,” IMF analysts concluded.

But U.S. exports to China, whose growing affluence has increased the appetite for American goods, are now reaching record levels.

U.S. businesses, however, continue to cite a long list of problems and unmet expectations in China, and the IMF said some of the recent progress may be illusory. Part of the decline of China’s current account surplus, for example, can be traced to a rise in state spending on infrastructure and investments in manufacturing or other plants rather than an increase in household spending. An increase in household spending would indicate that power and money were shifting to individuals.

“What we care about is whether China is adopting policies to rebalance its domestic economy, and the answer is, not yet,” said Derek Scissors, a China analyst at the Heritage Foundation. Enriching Chinese households and opening its economy to more investment would, it is argued, be a boon to U.S. companies hoping to sell more goods there.

But if recent steps are followed by other changes, it could mark an important turn. Premier Wen Jiabao earlier this month signalled there may be more to come when he said the “monopoly” of state-owned banks needed to be dismantled so more capital could flow through private hands. The privatization and free movement of capital into and out of China has long been a goal of U.S. economic officials.

A change in the tenor of China-U.S. economic ties could be politically significant as well. Republican presidential candidates have been highly critical of China and of President Obama for not taking a more hard-line approach toward the rising Asian power.

While the administration has taken a number of high-profile steps to counter alleged unfair trading practices, it has also placed faith in quiet negotiations on core issues such as reform of a financial system that is geared to benefit state-owned companies at the expense of households and private businesses.

Geithner and other outside analysts have often argued that China would eventually change some of those policies out of self-interest. Maintaining a peg between the renminbi and the U.S. dollar may help exporters, for example, but it feeds inflation and makes it impossible to set monetary policy and interest rates independent of decisions made by the U.S. Federal Reserve.

Although change has been gradual, the renminbi has appreciated about 14 percent against the dollar since 2010, and last weekend Chinese officials said they would allow it to rise and fall even more freely. The country is loosening some of its strict controls on the movement of capital into and out of the country; allowing retail investors to begin buying and selling some types of investments through Hong Kong; and allowing the sale of renminbi-denominated bonds in London.

There have been other such flurries of activity — often timed around international meetings where China hoped to either appear conciliatory or avoid expected criticism. The recent widening of the Chinese currency’s trading band comes ahead of IMF meetings in Washington this week and just two weeks ahead of the latest high-level economic talks with the United States.

Do you find Recent China Currency and Trade Moves significant?

Become an Advocate for The Made in America Movement in Your CommunitySan Francisco Subway System Adopts 'Buy American' Policy
Scroll to top
%d bloggers like this: