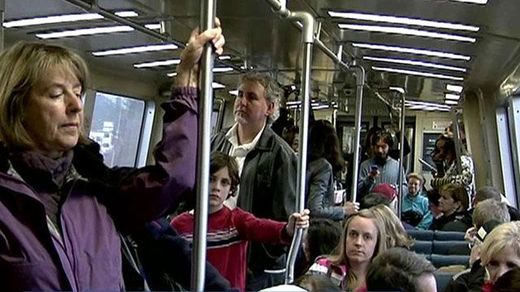 The nearly 800 trains that make up San Francisco Bay Area Rapid Transit, better known as BART, have reached the end of the line.

“We have the oldest cars that are currently running in the country,” says Dick Wieczorek, head of BART’S procurement department.

Now, the largest public rail line on the West Coast is spending $3.2 billion to replace 775 cars with a state-of-the-art fleet made in the U.S.A.

“We are instituting a ‘Buy American’ policy so that we can help put America back to work,” says BART board president John McPartland.

BART is the first transit agency in the nation to give preference to companies that manufacture most of their trains in the U.S., a move that makes it eligible for federal funds. At a recent press conference hailing the policy, California Congressman John Garamendi said BART’s choice was simple: “It can support our foreign competitors, or help create thousands of jobs for American workers and signal to the world that American manufacturing is back in business.”

Ironically, BART is looking at three foreign train makers, all with assembly plants in the eastern United States.

The one that uses the most American-made components, from engine parts to seat cushions, will stand a better chance of winning the lucrative bid.

“If somebody offers us more than 60 percent, in terms of domestic components, we can give them a bid preference in recognition of the fact that they may be spending more money to buy those U.S. components,” explains Wieczorek.

John Lohnas is among the 370,000 passengers who commute on BART each day. “Any time a company, especially a tax-supported organization, buys American-made products it’s wonderful,” he says.

But San Francisco economist James Forcier contends doing business in America isn’t always cheap, and the result will be higher fares for passengers.

“They [BART] already admit in their paperwork that the cost is going to be 5 percent to 10 percent greater as a result of this process than it would have been otherwise,” Fortier says. “Those dollars have to come from somewhere, and most likely they’re going to come from the riders.”

In the next few weeks, BART will decide which foreign company will be the winner of this ‘Buy American’ policy, with the first new trains rolling out by 2017.

Recent China Currency and Trade Moves ‘Significant’Why Women Will Rock the Economic Recovery
Scroll to top
%d bloggers like this: