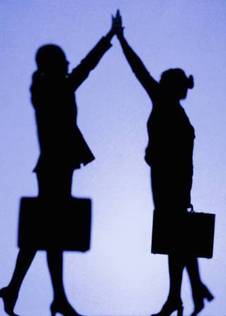 Written By: Rick Newman | US News | April 13, 2012
Anybody paying attention to politics may have gotten the impression that women are falling behind in the economy. This is one more reason to tune out politicians.

Mitt Romney generated buzz recently by claiming that women have accounted for 92.3 percent of all jobs lost since President Obama took office in 2009. That’s technically true, given the selective way Romney chose his numbers and the context he chose to leave out. But Romney’s startling factoid distorts the role women play in the economy and it especially misrepresents the strides women are likely to make over the next several years—which will significantly outpace the gains made by men.

Male and female workers obviously tend to be clustered in different industries, which is why they fared differently during the recession. Men dominate fields like construction and manufacturing, which tend to suffer sharp layoffs early in a downturn. That’s why the recession was characterized as a “mancession” in its earlier phases. Women are more prominent in recession-resistant fields such as healthcare, plus education and real estate, where jobs cuts generally came later. So they’re enduring more of an aftershock from the recession.

But women tend to be better educated than men, with more relevant skills, which means economic power will continue to shift toward women, as it has been for the last 20 years. The unemployment rate for women, for example, is 8.1 percent, while it’s 8.3 percent for men. During the recession, the gap was much bigger, favoring women by more than two percentage points for many months. That overall trend is likely to persist throughout the recovery. “Women are uniquely positioned to take advantage of jobs in tomorrow’s growth industries,” Bank of America Merrill Lynch wrote in a recent report, “and tend to enjoy stronger earnings growth relative to men.”

The educational advantage women have is striking. Women will earn 55 percent of all bachelor’s degrees conferred this year, according to the Department of Education, plus 60 percent of all master’s degrees and 53 percent of all medical degrees. By 2020, those proportions are projected to be even higher. Men today earn a slightly higher portion of professional degrees, such as M.B.A.s, but women will outnumber men in those, too, by 2020.

Education is still highly correlated with future earnings, despite mitigating factors like the mounting debt load some graduates have. So women will get ahead simply by virtue of their knowledge and credentials. Women also tend to have training in fields projected to grow the most. Merrill Lynch points out that in the fields likely to add the most jobs through 2018—including nursing, other medical sectors, accountanting, and post-secondary teaching—women have a growing proportion and in many cases a majority of the jobs.

Many men, by contrast, work in fields that are shrinking or being dramatically transformed. Manufacturing has rebounded from the lowest points of the recession, for example, and some analysts think a healthy revival is under way. But if so, the growth will mostly entail a smaller number of technical jobs, with overall employment levels unlikely to ever return to the peaks of the 1990s. Construction could take a decade to recover. And while big Fortune 500 companies with legions of gray-flannel-suiters are generally healthy, they’re doing far more white-collar hiring overseas than here in the states.

Women still face barriers, such as the career disruption caused by having and raising kids, and pay that’s still not equal, despite years of gains. Yet women have become an economic force anyway, and policy decisions in Washington have had practically nothing to do with it. In a new book, The Richer Sex, journalist Liza Mundy predicts that women will soon be the primary breadwinners in the majority of U.S. families, a status that suggests women will increasingly dominate decisions over how money gets spent in America, and therefore how the whole economy evolves. That’s likely to happen no matter who’s president. But don’t tell Mitt Romney.

Rick Newman is the author of Rebounders: How Winners Pivot From Setback To Success, to be published in May.
Follow him on Twitter: @rickjnewman

San Francisco Subway System Adopts 'Buy American' PolicyWhy the Party Is Ending for the Rich
Scroll to top
%d bloggers like this: