The U.S. manufacturing sector doesn’t get any respect.

Ask a random sample of people on the street and you’re likely to hear that America doesn’t make anything anymore, that China, Mexico and Vietnam took all of our factories, and that the only jobs left in America are flipping burgers and cleaning hotel rooms.

“Throughout history, at the center of any thriving country has been a thriving manufacturing sector,” says presidential candidate Donald Trump. “But under decades of failed leadership, the United States has gone from being the globe’s manufacturing powerhouse — the envy of the world — through a rapid deindustrialization.”

As with all myths, there’s some element of truth in what everyone says.

The number of jobs in the manufacturing sector has declined by about 5 million since 2000, falling from 17.3 million at the turn of the century to 12.3 million in 2015.

During World War II, when America was the Arsenal of Democracy, manufacturing provided more than a third of civilian jobs in the U.S., but that share has declined to only 8.7% in 2015. Only one of every 11 jobs is in a factory. Retail, health care, professional and business services, and leisure and hospitality services now employ more workers than manufacturing does.

The decline in manufacturing jobs certainly makes it seem as if America has been deindustrialized, but it’s not so. America still makes lots of stuff, but the number of jobs has shrunk because it doesn’t take nearly as many workers as it used to.

Here are four surprising facts about American manufacturing you may not know. 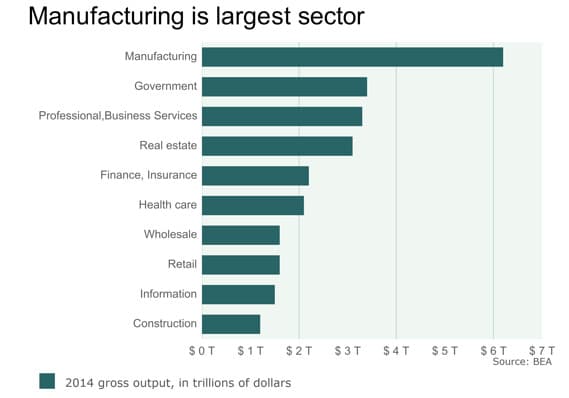 Manufacturing is the biggest sector in the American economy.

Surprising Fact No. 1: Manufacturing is the largest and most dynamic sector of the U.S. economy.

China became the leading manufacturing economy in the world in 2010, but the United States maintains a strong second-place standing. The value added by U.S. factories is more than $2 trillion a year, equal to the next three countries (Japan, Germany and South Korea) combined. U.S. manufacturing is still the envy of the world.

Gross output of U.S. manufacturing industries — counting products produced for final use as well as those used as intermediate inputs — totaled $6.2 trillion in 2015, about 36% of U.S. gross domestic product, nearly double the output of any of the other big sectors: professional and business services, government and real estate.

Manufacturing is at the center of the economy; it’s highly connected with most other sectors, such as transportation, retail, mining, utilities and business services.

Manufacturing companies also account for about 77% of what the private sector spends on research and development each year. If it weren’t for manufacturing, there would be very little innovation in the United States. 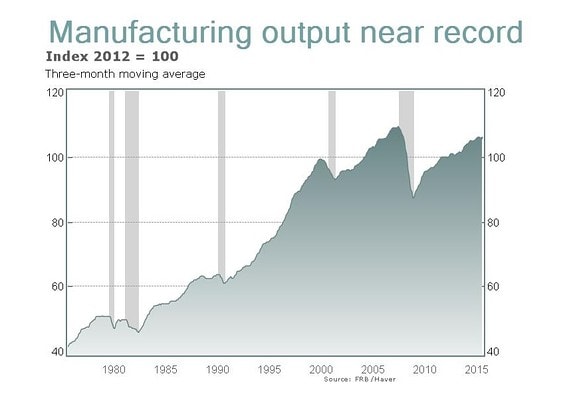 The output of U.S. manufacturers has doubled since 1984 and is near a record high.

Surprising Fact No. 2: Manufacturing output is a near a record high.

Technology and new ways of organizing work have revolutionized the American factory since the Golden Age of the 1980s. Today, U.S. factories produce twice as much stuff as they did in 1984, but with one-third fewer workers.

Total production of U.S. factories peaked in 2007 before falling by 18% during the Great Recession, according to the Federal Reserve’s industrial production report, which measures the volume of goods produced rather than the market value of those goods. The manufacturing sector has nearly recovered from the recession; output in 2015 was within 3% of the 2007 level.

But factory output has now stalled, with a strong dollar boosting demand for foreign-made goods at the expense of things made in the USA. It may take a few more years of growth to beat that record.

The output of durable goods was at an all-time high in 2015, more than triple what it was in 1980 and double what it was 20 years earlier. The production of electronics, aerospace goods, motor vehicles and machinery are at or close to all-time highs.

And, of course, other industries have nearly disappeared. The output of the apparel industries is down more than 80% since the heydays in the 1980s, while the output of textile mills is down about 50% since 2000. Those are the factories and jobs that are really gone for good. 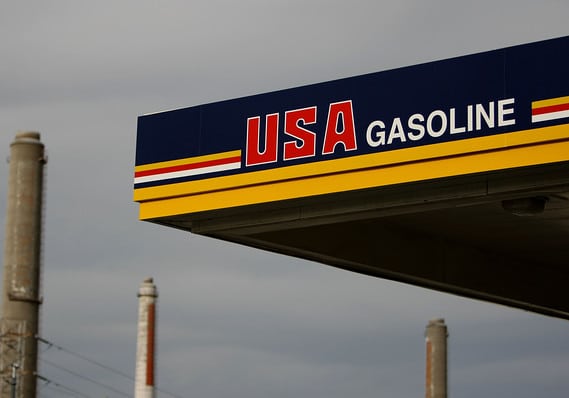 When you buy a gallon of gasoline, tip your hat to the American workers who made it. | Photo Credit: Justin Sullivan/Getty Images

Most Americans use something every day that’s made in America without ever thinking about where it’s made: gasoline.

The crude oil may come from Canada, Saudi Arabia or North Dakota, but it’s refined right here in America.

Refined petroleum products — such as gasoline, fuel oil, jet fuel and liquefied refinery gases — are America’s top manufactured product, with a value of shipments going out the factory door of nearly $700 billion in 2014, more than four times as much as the No. 2 product: light trucks.

America’s other top manufactured products are pharmaceuticals, airplanes and automobiles. Rounding out the top 10 are iron and steel, animal slaughtering, plastics, organic chemicals and petrochemicals. 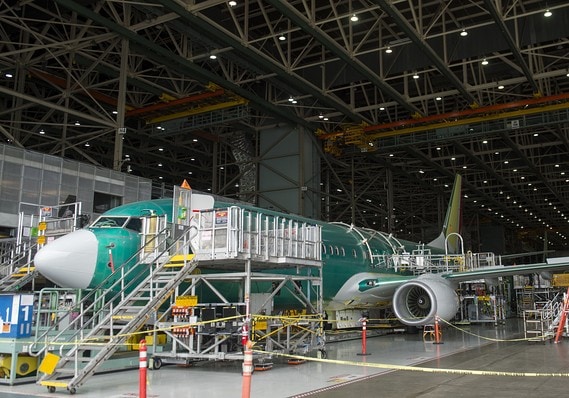 Surprising Fact No. 4: America also exports a lot of gasoline.

In 2014, before the price of gasoline tumbled along with the price of crude oil, refined oil was America’s biggest exported good, worth $62 billion.

Most Americans now work in service-producing industries, where inequalities in opportunities, skills and incomes are more apparent. Recreating an economy that provides equitable growth won’t be easy, especially if we pine for the good old days when a third of us worked at the factory.

Those days are gone for good, even if U.S. factories still churn out lots of items that are Made in the USA.

America’s Wealth Inequality and How it’s Connected to How and Where You...
Scroll to top