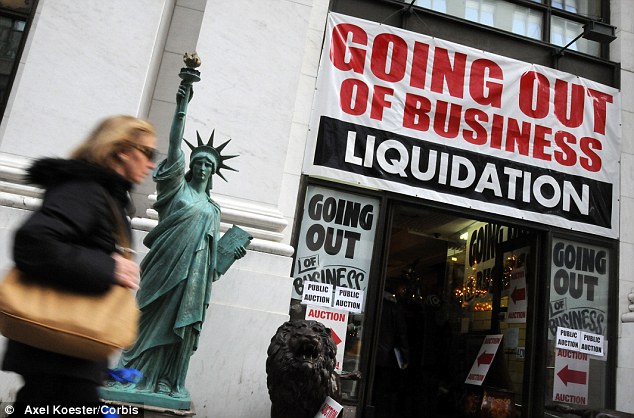 The American economy is less entrepreneurial now than at any point in the last three decades. That’s the conclusion of a new study out from the Brookings Institution, which looks at the rates of new business creation and destruction since 1978.
Not only that, but during the most recent three years of the study — 2009, 2010 and 2011 — businesses were collapsing faster than they were being formed, a first. Overall, new businesses creation (measured as the share of all businesses less than one year old) declined by about half from 1978 to 2011. 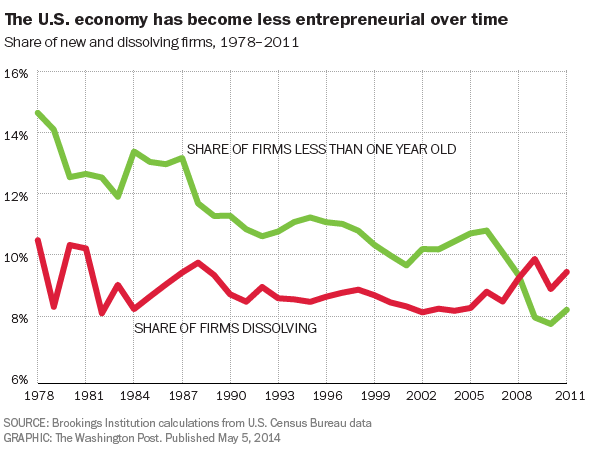 The authors don’t mince words about the stakes here: If the decline persists, “it implies a continuation of slow growth for the indefinite future.” This lack of economic dynamism, particularly the steep drop since 2006, may be one reason why our current recovery has felt like much less than a recovery. As Matt O’Brien noted on Wonkblog last week, annual job growth rates have stubbornly refused to budge above 2 percent for the duration of the recovery.The authors of the Brookings study dug beyond the national numbers to look at the change in new firms at the state and metro levels and found that they generally mirrored the national trends.

I mapped the state data below. While all states showed steep drops in new firms, New York stands out for its much smaller decline in the share of new companies than other states — only 18 percent, compared with the 50-state average of 47.2 percent. Illinois, Texas, New Jersey and Missouri round out the top five. 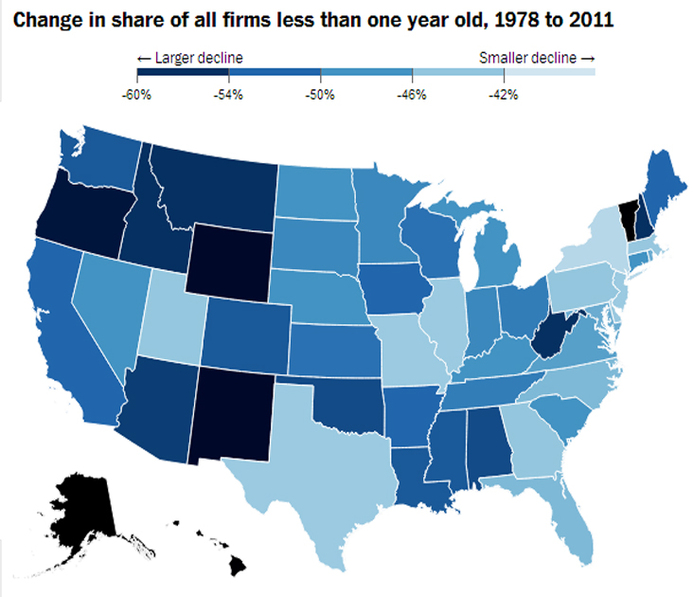 SOURCE: Robert Litan (The Brookings Institution) and Ian Hathaway (Ennsyte Economics). GRAPHIC: The Washington Post. Published May 5, 2014.
At the other end, Alaska had the largest drop in new business, at 61 percent. Hawaii, Vermont, New Mexico and Wyoming rounded out the bottom five. Teasing out the causes of the overall decline or the variation between states is difficult; the authors stressed to me that their data don’t answer the questions of why or how just yet. But they will be looking into that in the months ahead.No immediate pattern emerges from the state-level geography, but one thing is worth nothing. For kicks I tried to correlate the drops in new businesses in each state with the states’ scores on the Tax Foundation’s 2014 State Business Tax Climate Index. There was no significant relationship one way or the other. For example, New York, which showed the lowest decrease in new businesses, actually scored dead last in the Tax Foundation’s ranking. Wyoming had one of the largest declines, even though it ranked first in the Tax Foundation’s report.

At the very least, the Brookings findings strongly suggest that when it comes to luring new businesses to a given state, there are a lot more factors at play than straightforward calculations of corporate tax rates.

The Hidden Weakness in This Month’s Jobs Report We Need To Save The Internet
Scroll to top
%d bloggers like this: