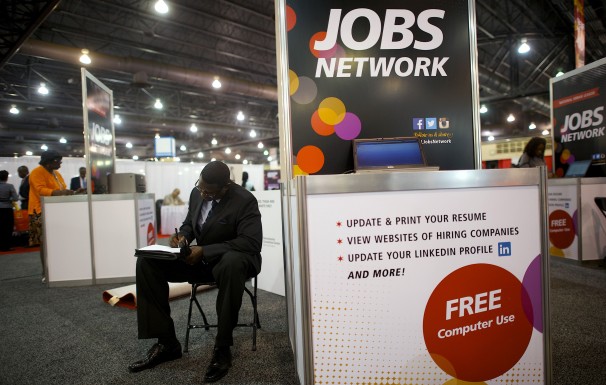 The good news from the April jobs report is that the recovery is the same as it’s always been. The bad news is that, well, the recovery is the same as it’s always been — and some workers are giving up as they realize that.
As you may have noticed, this winter was pretty cold. So cold, in fact, that the economy might have ground to a halt, as shoppers stayed home and home-building stayed weak. The initial estimate of first-quarter GDP growth was a miserable 0.1 percent — and that was after a string of disappointing jobs numbers to start the year. That’s why the April employment report was such a relief: The economy added 288,000 jobs (the most in any single month since January 2012), 36,000 more in revisions, and the unemployment rate fell from 6.7 to 6.3 percent.That sounds like unambiguously good news. But beneath the headlines, the recovery doesn’t look quite so robust. The jobs report is really two different sets of data. There’s the establishment survey, which polls businesses about how many positions they added or lost to come up with the jobs number. And there’s the household survey, which polls households about how many of them have jobs, or are looking for one, to come up with the unemployment rate. In April, the establishment survey showed the economy bouncing back from its winter of discontent. But the household survey showed discontented workers getting discouraged and dropping out of the labor force.

Here’s the bad news: The labor force fell by 806,000 in April, and most of that was because fewer people entered it to begin with. Reentrants — people who have worked before and just started looking again — plummeted by 417,000. That’s the largest monthly drop, in absolute terms, on record going back to 1967.

It’s confounding, because a stronger labor market tends to suck people in, not push them away. Indeed, the labor force had been growing the past six months — up 1.6 million between October and March — before this reversal. The likeliest explanation is that the data got ahead of the trend and that this is just a correction.

Still, there was plenty more to be disappointed about. The average work week was unchanged last month. So were average hourly earnings. Both of those are pretty good predictors of future demand — and future hiring — so there’s not much hint of better times ahead. If anything, the economy looks like it will just keep chugging along at its 2 percent pace. You can see how consistently mediocre the recovery has been in the chart below. Job growth has been the same since 2012. 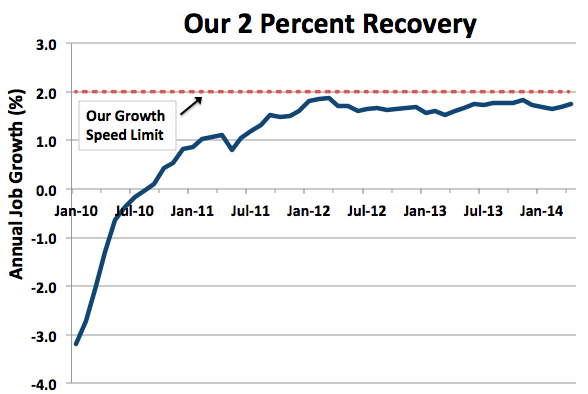 Let’s be clear: Adding 288,000 jobs is great. It would be even greater if it looked like that growth would continue, but it doesn’t, given the weak internal numbers. It’s likely that we’re now simply getting back to our earlier trend after the polar vortex had temporarily knocked us off.This still isn’t the recovery we’re looking for.
SOURCE:  Washington Post

U.S. Economy Adds 288,000 Jobs in April; Jobless Rate falls to 6.3% U.S. Businesses Being Destroyed Faster Than Being Created
Scroll to top
%d bloggers like this: