New government data released Friday morning showed the nation added 288,000 jobs in April, a reassuring sign that the U.S. economy has picked up momentum since stalling out over the winter.
The hiring spree surpassed most analysts’ expectations and is the strongest showing in more than two years. Businesses added workers across a broad array of sectors, including business services, retail and construction. The unemployment rate plunged to 6.3 percent — the lowest level since 2008 — though part of that was due to a shrinking labor force.The upbeat report provided a convincing counterpoint to data released earlier this week that revealed economic growth was virtually flat during the first quarter. Many analysts attributed that weak reading to the unusually cold winter and argued that a spring thaw is already underway. The Labor Department also increased its estimates of hiring during the previous two months by 36,000 net jobs.

“It’s just what the doctor ordered in terms of a further piece of confirmation that the winter was abnormal,” said Eric Lascelles, chief economist at RBC Global Asset Management. “We can just expect further economic normalization.”

Wall Street opened higher on the news, but the major U.S. indexes were mixed at mid-day. The blue-chip Dow Jones Industrial Average inched into the red, while the broader Standard & Poor’s 500-stock index was up slightly. The tech-heavy Nasdaq gained 0.2 percent.

The jobs report contained at least one ominous note. The nation’s workforce shrank by more than 800,000 workers in April, sending the labor force participation rate plummeting 0.4 percentage points to 62.8 percent. The Labor Department said most of that decline was due to fewer people joining the workforce.

“People are not giving up in the labor force,” U.S. Labor Secretary Thomas E. Perez said in an interview. “That would be a fundamentally different diagnosis of where we are now.”
The number of re-entrants — people looking for a job after being out of the labor market — plunged by 417,000, the largest drop on record. New entrants declined by 126,000. Many high school and college students typically begin entering the job market in April, but the number of people younger than 25 in the workforce fell by 484,000. The participation rate for teens ages 16 to 19 hit the second-lowest level ever.

“I would actually say that this big drop in the unemployment rate is not consistent with a really robust labor market because that labor force participation rate did not rise, and the employment-to-population ratio is shockingly low,” said Tara Sinclair, an economics professor at George Washington University and economist at Indeed.com, one of the nation’s largest sites for job postings.

Another factor driving the smaller workforce could be the expiration of benefits for the long-term unemployed at the end of last year. To qualify for the payments, workers have to show they are looking for jobs. Without the incentive of unemployment benefits, many of them might have ended their search.

The U.S. Senate voted in April to extend unemployment benefits through May for workers who have been out of a job for six months or longer, but the measure faces a rocky road in the House. On Thursday, Sens. Jack Reed (D-R.I.) and Dean Heller (R-Nev.), the bill’s sponsors, urged the House to move quickly.

“Emergency unemployment insurance is a lifeline for job seekers, and restoring it will strengthen the recovery by bolstering demand at a critical time,” Reed said. 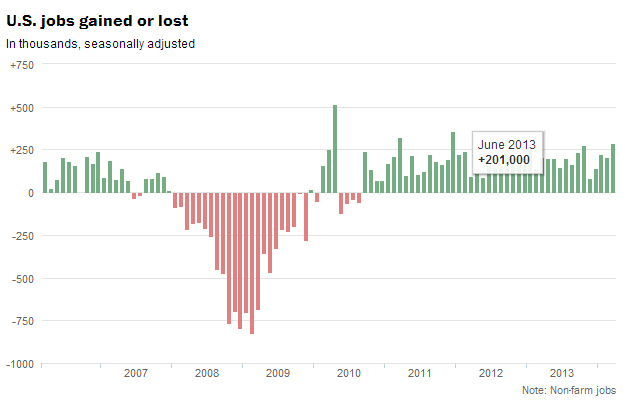 Friday’s data showed the number of long-term unemployed fell slightly to 3.5 million in April, accounting for roughly one-third of America’s jobless. Meanwhile, about 7.5 million people were in part-time jobs for economic reasons. Fed Chair Janet Yellen has cited those dynamics as reasons to keep the central bank’s benchmark short-term interest rate low for years to come.But the sharp drop in unemployment could complicate the Fed’s task. Several top officials, including San Francisco Fed President John Williams and Atlanta Fed President Dennis Lockhart, have said they believe the first rate increase should come when the jobless rate falls to about 6 percent. Both officials had predicted that would not happen until next year, but that goal post is now much closer.

April’s pickup in hiring also helps validate the Federal Reserve’s decision this week to continue scaling back its support for the recovery. The nation’s central bank is reducing its monthly bond purchases by $10 billion to $45 billion — about half the amount it was pumping into the economy every month last year. The Fed has tied its stimulus to the health of the labor market, and Friday’s data clearly show it is improving.

The construction industry provided one of the biggest boosts to job creation last month. The sector added 32,000 jobs, concentrated in heavy and civil engineering and residential building. Over the past year, it has hired 189,000 workers, with the bulk of those gains coming within the last six months.

The main hiring engine was the professional and business services sector, which created 75,000 net jobs. Retailers and bars and restaurants each added more than 30,000 jobs. The health care industry gained 19,000 positions.

China Could Overtake the U.S. as World’s No. 1 Economy This Year The Hidden Weakness in This Month’s Jobs Report
Scroll to top
%d bloggers like this: