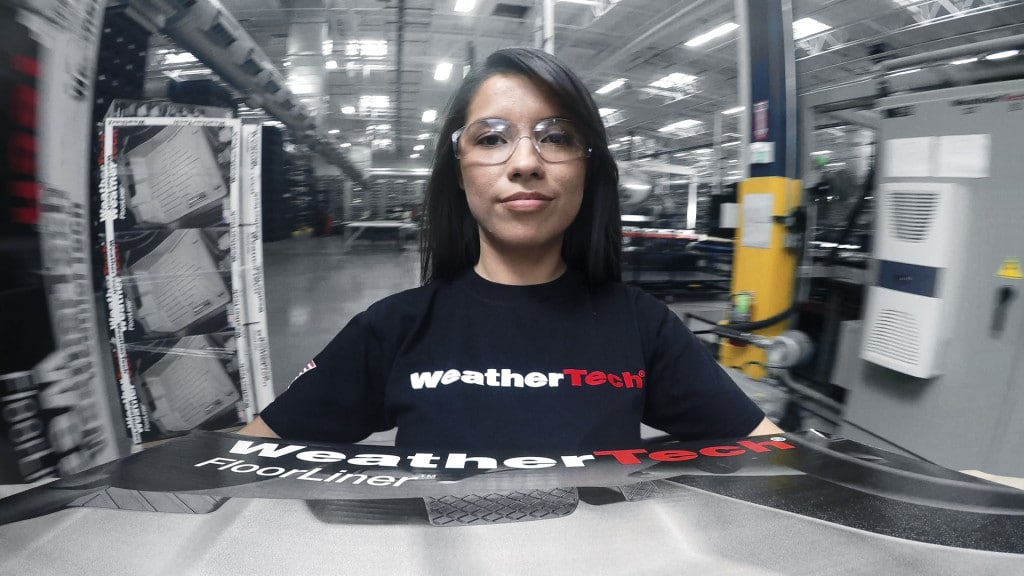 At a time when flag-waving couldn’t be more in fashion, David MacNeil knows a thing or two about standing up for American products. Or at least resting your muddy boots on them. While creating jobs in the process.

“This is what resonates with my fellow Americans,” he says. “They like to support people who are patriotic in providing jobs for their fellow Americans. All I was trying to do was raise awareness about buying American-made products.”

As Americans follow the medal count at the Winter Olympics in Sochi, MacNeil has put “Made in the USA” at the center of marketing for his MacNeil Automotive Products, one of the country’s leading makers of all-weather floor mats and other vehicle accessories. Earlier this month, the company he founded plunked down millions for a 30-second Super Bowl commercial that played down his WeatherTech

mats while playing up how a business still can profitably make things in the USA while creating jobs in the process.

Through the ad, MacNeil was playing in the big leagues normally reserved for the likes of Coca-Cola, General Motors and Anheuser-Busch InBev. While the ad — in a telecast where just the 30 seconds of airtime averaged $4 million — took a huge dent out of his $40 million annual advertising budget, he says it was just a matter of good business.

No doubt about it, MacNeil is providing jobs; about 950 of them spread over six plants in Chicago suburbs. They make rubber floor mats that MacNeil considers a vast improvement over the flimsy mats that inspired him to try to create something better. WeatherTech’s concave mats fit the full footwell of a car, laser measured to fit the space exactly, in a way that keeps moisture and mud from spilling onto the carpet. Floor mats may sound like a low-tech product, but a walk around the plant reveals a high-tech manufacturing process that is heavily robotic. Workers —— in uniforms with an American flag on the sleeve — handle much of the trimming and packing.

Every new car model requires new molds for floor mats that fit — creating an expanding list that’s up to 18,000 part numbers. To produce the molds, MacNeil says he employs his own tool-and-die makers. Beyond WeatherTech

• When he was building a new factory, he stipulated that the builders only use American-made construction equipment.

• While inspecting a factory under construction about four years ago, he spied foreign-made parts in some of the piping. “I blew a gasket,” he recalls and required American-made parts to be substituted.

• Some hand-operated forklifts turned out to be imported. “I made them send me the American-made ones, even though they cost more,” he says.

MacNeil isn’t alone in sensing the country’s preference for products made in the USA. A survey by the Alliance for American Manufacturing found four out of five voters favor spending their state and federal tax dollars on American-made goods whenever possible.

The “Made in America” pitch has shown up in advertising in a big way for about four years, says Scott Paul, president of the alliance. Even foreign firms selling in the U.S. market make a point of any American plants they have, he adds.

MacNeil says he isn’t against imports. He says he supports trade with countries that have reciprocal trade policies. “If you buy 10 from me, and I buy 10 from you, God bless,” he says. That leaves others — though he won’t single them out by name — as nations in which he won’t deal.

Indeed, for all the talk of “Made in America” goods, you wouldn’t exactly figure out the companies’ devotion walking into the attached store. A vintage Aston Martin is center stage with a few famous foreign motorcycles. A BMW crossover sits on the floor a few feet away to show off the floor mats. Photographs of the racing Porsche that the company sponsors — and that is driven by MacNeil’s son — hang on the walls. Oh, and there’s a Ford Mustang, too.

MacNeil seems at peace with the mixed message. He collects cars from around the world.

The larger point, he says, is that he counts WeatherTech among America’s world-class brands — names such as Ford or Sub-Zero — that he says are known for quality. And by that measure, he got there relatively quickly.

WeatherTech’s story starts in 1989 when MacNeil, then a vice president of sales for auto high-performance outfit AMG, now a unit of Mercedes-Benz, became fed up with the quality of car floor mats. They didn’t contain dirt and weren’t easy to clean.

“I took a second mortgage as a 30-year-old and told all my friends that I was going to sell rubber floor mats, and they laughed at me,” he says. He started making trunk inserts for SUVs and, yes, importing from an English maker who could meet the quality standards. By 1994, he found a contract maker in the U.S. that could take over the work, and later, he opened his own plants.

The capstone to the company’s success — MacNeil won’t divulge privately owned company’s sales or profits — came on Feb. 2 in his half-minute ad during the first half of the Super Bowl. It featured bankers and others casting doubt on someone’s sanity for wanting to manufacture products in the U.S.

mostly hawks its floor mats through magazine advertising. He says supporting his strategy of making products in the USA is easy.

It boils down to: “If my neighbors don’t have jobs, sooner or later, I’m not going to have a job.”