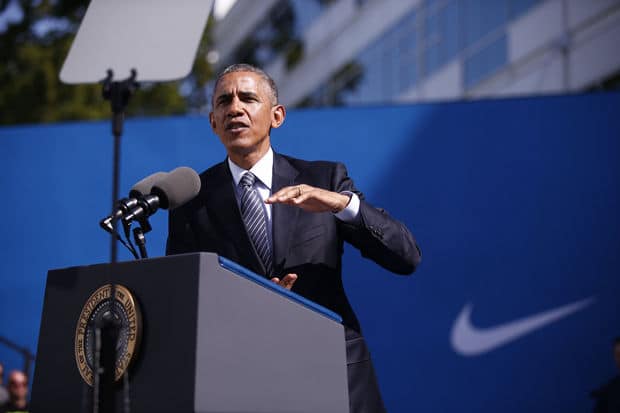 President Obama is at Nike headquarters near Beaverton to promote a Pacific Rim trade agreement on May 8, 2015. Bruce Ely/Oregonian/Oregonlive/Pool

Nike took advantage of the attention generated by President Obama’s visit last week to make a bold statement: It would open a footwear factory in the United States, employing 10,000, if an international trade agreement gets approved.

That’s what was widely reported, anyway. What Nike actually said turned out to be somewhat more nuanced.

Let’s be clear: Nike is likely to onshore manufacturing jobs into the United States regardless of what happens with free trade. It has millions of other (bottom line) reasons for wanting the Trans-Pacific Partnership deal to be approved.

Nike’s statement issued hours before Obama’s headquarters visit last week confirmed what many in the athletic gear industry have known was in the works for at least three years: The company is on the cusp of manufacturing an athletic shoe with as little human intervention as possible.

Take out much of the cost of human labor, and labor costs overseas become less significant. (Being closer to your point of sale becomes more important in that scenario, and Nike sells more shoes in North America than anywhere else.)

Nike’s statement said that passage of the TPP, a free-trade agreement among the United States, Canada, Mexico, Chile, Peru, Australia, New Zealand and five countries in Asia, would “accelerate development of new advanced manufacturing methods.” Most of Nike’s footwear production now is concentrated in Vietnam (a TPP country), China and Indonesia. 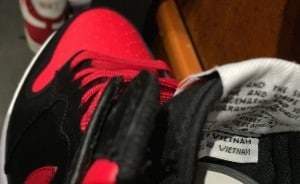 A vintage Nike basketball shoe, made in Vietnam, on display at Nike Portland.

The statement also said Nike’s U.S. initiative would create up to 10,000 manufacturing and engineering jobs in addition to thousands of construction jobs and up to 40,000 indirect supply chain and service jobs in the United States over the next decade.

But what does that mean, exactly? A single, large factory? If so, where? Or an assemblage of smaller contract-partner sites like it already has in Oregon and 18 other states? And is any of it truly contingent on this trade deal?

In response to questions from The Oregonian /OregonLive, Nike reiterated that “meaningful duty relief” would enable the company to move more swiftly on its U.S. manufacturing plan.

“Nike is a global company with many competing priorities for our investments,” spokesman Greg Rossiter said in a statement.

But even with reduced tariffs, Rossiter said, the technology to realize its U.S. manufacturing plan is still under development.

“Many of the technologies and innovations don’t currently exist,” he said.

“We expect the jobs to be across a spectrum of industries and fields, including manufacturing, engineering, technology and supply chain.”

At least one of the technologies does exist, however, and Nike chief executive Mark Parker introduced the computer-designed, machine-woven upper called Flyknit in 2012. At that event in New York City, Parker mused about further potential advances in footwear construction.

“That is actually going to change the whole formula for how footwear is made,” Parker told The Oregonian/OregonLive at the New York event. “I think you’re going to see that on a larger and larger scale.”

Others in the industry agree change is coming.

“The way shoes have been made in the past is very labor intensive,” said Peter Rueegger, a partner in the Portland footwear consultancy I-Generator. “Every shoe has been hand made, handstitched.”

Building a Nike Flyknit upper still requires humans to work with a machine to secure the upper to the midsole.

Building the upper and securing it to the midsole with minimal to no human interaction “would be the end goal,” said Rueegger, whose clients have included Nike, Adidas, Under Armour, Timberland and others. “How far out are we from that? (From) full automation, where the location of the manufacturing plant no longer matters?”

Rueegger suspects Nike is closer than anyone. Recently, he assisted Adidas, which also manufactures the bulk of its shoes in Asia and was his employer for a dozen years, in researching the feasibility of bringing footwear making back to Europe. That’s the location of its largest customer base. Adidas chief executive Herbert Hainer mentioned the European production goal during a presentation earlier this year to stock analysts and others.

A Germany-based company, Desma, might also be close to developing the mechanisms to secure shoe uppers to soles with minimum human involvement, said Pat Miner, president of Weinbrenner Shoe Co. in Merrill, Wisconsin.

“I’ve seen it,” said Miner, whose employee-owned factory produces about 65 percent of its footwear in Wisconsin, mostly for public safety, other work-related and outdoors uses.

“We focus on Made in USA,” Miner said, “and (customers) have to be willing to pay for USA goods.”

The way shoes have been made in the past is very labor intensive. — Peter Rueegger, I-Generator

That said, even Weinbrenner could shift some production to Vietnam if TPP is approved.

“Everybody’s racing to Vietnam if this goes through,” he said, “because there will be no (U.S. import) duty.”

Nike also has participated in efforts to change its production methods in other areas, something that reflects the $28 billion revenue company’s enthusiasm for technological evolution.

In 2013, the company and a Taiwan-based contract manufacturer announced the opening of a water-free dyeing facility. Typical fabric dying, as well as the production of fabrics in general, consumes huge volumes of water.

But for now, a fairly standard model of footwear manufacturing continues to dominate the scene globally, mostly from Asia. And that model is big factory, bigger factory, biggest factory.

Depending on the type of shoe, as many as 80 people may participate in the production of a pair of shoes in a typical factory, said Portland footwear production consultant Rob Reinhart.

Even with technological changes in footwear production, the old way will be the dominating way for the foreseeable future, said Reinhart, a former employee of LaCrosse Footwear and Columbia Sportswear.

“There are advances that are happening that are automating normal processes,” he said. “It doesn’t happen overnight. The vast amount of footwear is still made with processes that have been in place for years and years with human labor involved.”

Nike researches, designs, markets and manages its shoes, clothing and other products, but it doesn’t make any of them. It farms that work out to partner factories.

Slightly more than 1 million people work in Nike-contracted factories, about three-quarters of them in Vietnam, China and Indonesia. In the United States, it has a grand total of 8,408 working on making its products in some capacity. (There are 26,000 people in the U.S. working directly as Nike employees, 8,500 in Oregon.)

Vietnam has become the nation with the biggest number of contracted Nike employees – 333,591 in all. The Southeast Asian nation supplanted China as the company’s top manufacturer in the past decade as a result of rising labor costs in China and shifts in the workforce in those countries.

The workers in Vietnam are spread among 67 factories. But the bulk of them are in factories whose size defies imagination in the United States. Of the top 10 largest Nike contracted factories in Vietnam (all of which make footwear), the smallest — Dean Shoes Vietnam, in Ho Chi Minh City — has 10,350 employees. The largest — Pou Chen Vietnam Enterprise LTD, in Bien Hoa City – has 24,324.

Importing shoes made by all those workers without any tariffs in a post-TPP world is enough incentive for Nike to be a cheerleader alongside President Obama for the trade pact.

TPP advocates who say the pact would improve working conditions in participating countries often follow that statement by mentioning Vietnam.

Obama addressed the topic during his visit to Nike’s campus.

“Some of these countries, they don’t have the standards for wages and labor conditions that we have here,” Obama said.

“That would make a difference.  That helps to level the playing field and it would be good for the workers in Vietnam, even as it helps make sure that they’re not undercutting competition here in the United States.”

Frank van Wezel, who founded the outdoor footwear company Hi-Tec about 40 years ago, has watched Nike’s ascent from his company’s home base in The Netherlands. If any company can produce the completely manufactured, no-hands-on shoe, van Wezel said, it’s Nike.

“Because they have all the resources — finance, and research and development and intelligence behind them to actually pull it off,” van Wezel said in an interview. “And they will set an example which we hopefully have to follow in the future.

“They have to lead. If this is a trend they have to be the trendsetter.”