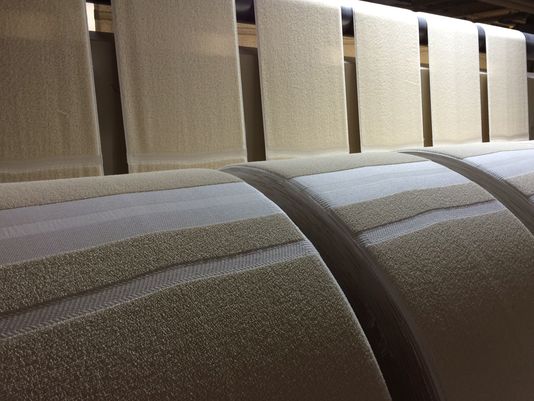 UNION, S.C.–From now on, all towels made for Marriott International’s nearly 3,000 hotels in the USA will be made in the USA.

Marriott announced on Thursday that it will have only “Made in the USA” towels and bath mats in every guest bathroom.

The Bethesda, Md.-based hospitality giant has partnered with Standard Textile, which has factories in Thomaston, Ga., and Union, S.C., to produce the towels and bath mats with 100% cotton fiber grown in the USA. Standard Textile says the partnership will produce 150 jobs.

Previously, Marriott’s terry cloths were made in Jordan.

“If you can bring 150 jobs back to the USA and we can put on all our towels and bath mats ‘Made in the USA,’ I think that gives a certain amount of pride to all of our associates and management,” Bill Marriott, chairman of the Board of Marriott, said during his flight to tour both plants on Thursday.

All its brands from the Courtyard Marriott to the Ritz-Carlton will participate in the new program.

“The fact that these items can be made in the USA like they were 20 years or so ago I think makes more sense today than ever because the customer is very much more attuned into looking at an item to see if this is made far, far away,” says John Adams, Marriott’s senior vice president of global operations.

The move comes as “Made in America” has become a touch point in the U.S. presidential campaign. Candidates for both parties have campaigned against outsourcing manufacturing to other countries in order to produce more jobs domestically. Republican front-runner Donald Trump, also a hotelier with his Trump Hotel Collection, has come under fire for manufacturing branded products in China.

“On the face of it, this seems rather clever,” says Carl Winston, director of the Payne School of Hospitality at San Diego State University. “I doubt it’s going to be much of an increase in supply costs. They’re tapping into the public sentiment. There’s a sort of a nationalistic furor seeming to grip the U.S. in both the Democratic and Republican parties.”

He added: “It’s a nimble move for a giant company to make, At the end of the day will it make people go to their hotels? I don’t know.”

Standard Textile says it has already hired 110 additional workers to handle the production. It expects to hire at least 40 more.

Gary Heiman, president and CEO of Standard Textile, which has worked with Marriott for about a decade, says the company has invested $40 million in its U.S. plants to handle the production. Previously, the company manufactured products in Jordan and China.

Marriott says producing in the USA won’t cost the company any more money. It also promises that all the products, which will be phased in over the next two years, will be of the same quality.

“We put a lot of time into making sure those products are really well-done and fit the brand that they’re in, in terms of size, quality and durability,” Adams says.