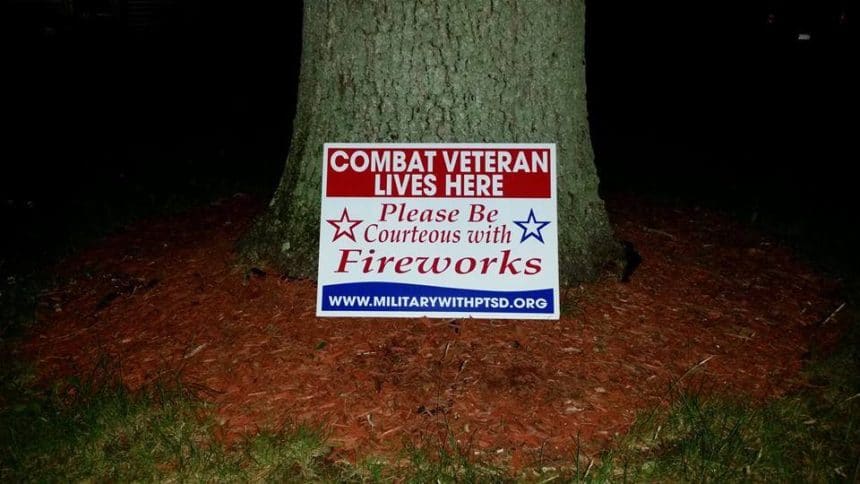 Back in 2015, a few days before Independence Day, Kevin Rhoades planted a sign on the lawn outside his Texas home that bore a simple message: “Combat Veteran Lives Here. Please Be Courteous with Fireworks.”

“It didn’t work,” said Rhoades, 33, a Marine who served two tours of duty in Iraq and suffers from post-traumatic stress syndrome. “People still pop fireworks off in town even though it’s against the law. Some people just don’t understand.”

The sign Rhoades put up in his yard, which he got from an Indiana veterans group called Military With PTSD, was not merely an effort to prevent a sleepless night. Experts say fireworks pose a genuine threat to some PTSD sufferers and can cause them to act out violently.

Those concerns were borne out in 2015 on Independence Day when a Georgia veteran with PTSD killed himself after he became agitated by fireworks, family members said. And last year a vet in Wisconsin fired rifle shots into the air after early fireworks “triggered him” and he thought he was back in Afghanistan, according to a police report.

“I think I fired like five shots in the air,” the vet, who had been drinking at the time of the incident, told officers who arrested him on firearms-related charges. “I was freaking out like I was back in Afghanistan.”

No veteran who served this country would ever want to stop fireworks. What we’re aiming for with the signs is a courtesy heads up.

Jackie Maffucci of Iraq and Afghanistan Veterans of America, a leading authority on PTSD and veteran suicide, said while the public should be considerate of veterans, it’s also important to realize that fireworks don’t trigger outbursts in many who suffer from the disorder.

“We need to get away from the stereotype that every post 9/11 veteran is broken,” she said. “That is not the case. There are plenty of veterans out there who have PTSD and who won’t react to fireworks.”

But among those most affected by PTSD, fireworks could definitely trigger “a range of reactions,” she said.

“It could be anything from an individual becoming more alert and vigilant to someone suffering intrusive thoughts, even flashbacks,” she said.

That applies to a lot of Americans, as one in five of the approximately 2.5 million veterans who served in Iraq and Afghanistan — or approximately 500,000 former military members — have been diagnosed with PTSD, a psychiatric disorder caused by experiencing or witnessing life-threatening events like military combat, experts say.

It causes some sufferers to relive the trauma. In others, it provokes a feeling of isolation or rage. And in other cases, it leads to substance abuse, depression and a host of other psychological and physical problems.

Shawn Gourley of the Military With PTSD nonprofit says the group began making and distributing the signs that Rhoades planted on his lawn last year after her husband, Justin, a disabled Navy vet with PTSD, came up with the idea. They gave out 4,372 of them in 2015.

Gourley said the intention is not to play the Fourth of July equivalent of the Grinch.

She said most veterans she’s heard from are supportive of the effort, but others have said they see the signs as the equivalent of a “scarlet letter” identifying them as damaged human beings.

“They said it makes them look weak and makes the stigma worse,” she said.

But Rhoades, the Texas Marine, said the signs spread an important message about the difference between planned fireworks celebrations and sudden, unexpected detonations.

Because he can prepare for events like the annual fireworks display that his hometown of Andrews puts on, the mortar-like thunder they produce don’t faze him, he said. But the sudden rat-a-tat of firecrackers or fireworks set off by his neighbors at night would transport him back to Baghdad and set him on edge.

Maffucci, the PTSD expert, said Rhoades’ situation is not unusual, as vets are especially vulnerable to things like “unexpected backyard fireworks that an individual doesn’t anticipate and can’t even get prepared for.”

For that reason, posting a sign the way Rhoades did is helpful, “if only to start a conversation.”

“It could really help on the Fourth of July holiday,” she said. “It must be hard for the individuals who were out there on the front line defending our freedom not being able to celebrate freedom.”

But any conversation with neighbors – either through a sign or face-to-face — only extends so far.

Mike Kreft, the Georgia Army veteran who took his life in 2015 on the Fourth, had asked friends and family not to light fireworks on the holiday, knowing it was one of his PTSD triggers. However, the message wasn’t relayed to some unsuspecting neighbors, his brother Jon, told a local television station.

That’s one reason Rhoades won’t just rely on his sign, which he again posted in his yard. He’ll be leaning on his buddies from Halo for Freedom, a support group for vets with PTSD, to help him get through the holiday.

“It’s not that I don’t want people to have fun,” he said. “On the Fourth of July, I’m going to pop my own fireworks. But when you get woken up at two, three o’clock in the morning, it brings back those memories.

“I just want people to have awareness of the veterans, to just be respectful because there are a lot more people who have more stress than I do.”

Please, make sure your flag is Made in USA. Check out these Made in USA American Flags

we found. The country of origin reads Made in USA, but please, double check before purchasing.

The First National Reshoring Award Scheduled For This Year

5 Things I Wish I Knew When I First Started: Corey Towe
Scroll to top
%d bloggers like this: