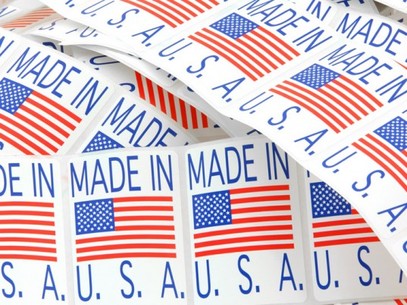 Alyssa Alimurung
More than three in four Americans consider the U.S. origin of a garment an “extremely” or “somewhat” important factor in their purchase decision, according to a survey conducted by the NPD Group for Women’s Wear Daily. That’s a 29.8 percent increase from responses 10 years ago. Although Marshal Cohen, NPD Group’s chief analyst, wasn’t surprised at how attitudes towards domestic manufacturing have changed, he didn’t anticipate the strength of support in a flaccid economy. Still, he remained cautious. “When you ask people to pinpoint their feelings about something, you have to take the numbers with a grain of salt,” he told the fashion publication. “If 40 percent of the people say they care, maybe just 20 percent would act on that. The jobs market has had a big effect on conscious consumer priorities, but the wallet doesn’t always follow when it comes to purchasing.”
MAKING IT HERE

Not that brands and retailers shouldn’t explore the opportunity to “build and sell more American product,” Cohen continued. “The companies that are building product in the U.S. and those selling those products need to exploit it; and those who aren’t sourcing here or using product sourced here need to explore it. Who can overlook the opportunity to address what might be even a 20 percent level of greater passion about the products they’re offering?”

A growing number of Americans say they’re ready to buy American even if it costs more.

Whether they’ll put their wallets where their mouths are remains to be seen, but Americans say that they’re ready to buy American even if it costs more. More than one in five respondents—21.4 percent—said they’d pick a U.S.-made shirt or blouse over a comparable import as long as the price wasn’t 25 percent higher. Another 17.3 percent said they’d choose the domestic option if the price was no more than 10 percent more expensive than the alternative. Three in 10, or 30.4 percent, would buy American only if the prices were approximately the same, while 21.8 percent would buy American “under any conditions.”

“Consumers are telling us that they’re willing to pay at least a bit more, and occasionally quite a bit more,” Cohen said. “The tolerance [for higher prices on American products] is there and the consciousness is there, but so far there hasn’t been a move in that direction.”

“Made in America” is a more attractive sell because of intangibles such as social responsibility and national pride, Barbara Kahn, director of the Jay H. Baker Retailing Center at the Wharton School of the University of Pennsylvania, told WWD. “People are more likely to pay for ‘Made in America’ if there was a value proposition tied to it,” she said. “The Italians have done that, and in that kind of a trade-up, people are willing to pay extra money for something. You can market to the economic recovery, the need for more American jobs and social responsibility, but it takes on greater meaning if it’s coupled with emphasis on quality, as some of the premium denim brands have seen.”

Americans may disagree about the premium they’re willing to pay for U.S.-made clothing, but if money were no object, nearly three-quarters—74.2 percent—approve of incentives to rebuild garment and textile production in the United States. Support for new trade barriers to discourage imports was less certain, with 55.7 percent of respondents in favor, 14 percent opposed, and 30.3 percent undecided.