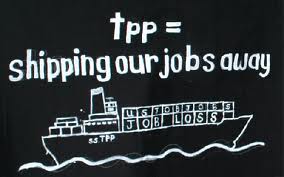 Strongly worded letters to President Barack Obama Tuesday were signed by hardline tea partiers, true-blue progressives, and moderate, corporate-friendly lawmakers in both parties, indicating political trouble for a trade deal the administration had hoped to seal by year end.

Critics of the Trans-Pacific deal have warned that it would undermine Internet freedom and consumer protections in the U.S. and abroad. But the letters take issue with the process for approving the deal, demanding greater congressional input, rather than singling out specific policy complaints. Because of their broad scope, trade deals often draw a variety of critics, who can choose to fight the deals on procedural grounds, rather than attempting to unite behind disparate policy issues. On some issues, however, a lack of congressional oversight can generate opposition, even from supporters of the Obama administration’s policy proposals.

“Under Fast Track, the executive branch is empowered to sign trade agreements before Congress has an opportunity to vote on them, and then unilaterally write legislation making the pacts’ terms U.S. federal law,” reads a letter from 22 House Republicans. “Fast Track allows the president to send these executive branch-authored bills directly to the floor for a vote under rules forbidding all floor amendments and limiting debate. … We do not agree to cede our constitutional authority to the executive.”

The GOP letter includes signatures from tea party stalwarts like Rep. Michele Bachmann (R-Minn.), along with moderate members whose tenure in Congress dates to the 1990s. A coalition of New Democrats and progressives — who typically take opposite positions on free-trade deals — pressed the same theme in a separate letter.

“Any new proposed Trade Promotion Authority must reflect the changing nature of international trade and ensure that Congress plays a more meaningful role in the negotiating process,” reads a letter from 12 Democrats, including progressives like Reps. John Lewis (D-Ga.) and Jim McDermott (D-Wash.), along with moderates Reps. Allyson Schwartz (D-Pa.) and Jim Himes (D-Conn.).

The letters come the day before liberal Democrats plan to voice concerns with the trade pact process in a press conference.

The proposed terms of the Trans-Pacific Partnership deal are secret. The Obama administration, like many of its predecessors, has registered the trade platform as classified information, to the chagrin of lawmakers. Although several dozen corporate officials and a handful of public interest experts are given access to the negotiation information, they are not permitted to disclose it to the public or the press. Staffers for members of Congress also are denied access to the terms.

From leaked drafts, terms of the Trans-Pacific deal have come under fire for proposing to grant corporations the political power to directly challenge government regulations in international court. This sovereignty issue has long been a sticking point for both conservatives and progressive members of Congress, as the right to challenge government rules had been restricted to sovereign nations under World Trade Organization pacts and other deals.

But the U.S. government has pushed to include such language in trade agreements dating back to the 1993 North American Free Trade Agreement. In recent years,Exxon Mobil, Dow Chemical, Eli Lilly and others have attempted to challenge Canadian rules on offshore oil drilling, fracking, pesticides and drug patents through NAFTA’s corporate-empowered litigation system. Proponents of generic medications have also voiced concerns that the Trans-Pacific Partnership would undermine access to affordable, life-saving drugs.

American labor unions have complained that these systems encourage corporations to move jobs to locations with weak regulatory oversight.

Proponents of free trade deals defend the Trans-Pacific Partnership as an effort to reduce unnecessary rules and tariffs that interfere with productive commerce.

Consumer protection advocates, environmentalists and public health experts, have voiced opposition to leaked terms of the pact, which includes the U.S., Australia, Peru, Malaysia, Vietnam, New Zealand, Chile, Singapore, Brunei, Canada, Mexico and Japan. Several of these countries already have free trade agreements with the U.S. that have eliminated most tariffs. That suggests much of the deal’s appeal is tied to regulatory standards.