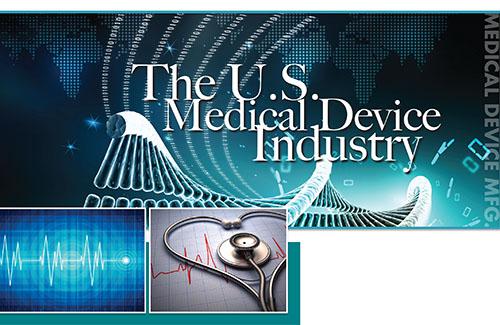 The United States remains the largest medical device market in the world with a market size of around $110 billion, and it is expected to reach $133 billion by 2016.  The U.S. market value represented about 38 percent of the global medical device market in 2012.  U.S. exports of medical devices in key product categories identified by the Department of Commerce (DOC) exceeded $44 billion in 2012, a more than seven percent increase from the previous year.

The United States also holds a competitive advantage in several industries that the medical device industry relies upon, including microelectronics, telecommunications, instrumentation, biotechnology, and software development.   Collaborations have led to recent advances including neuro-stimulators, stent technologies, biomarkers, robotic assistance and implantable electronic devices.  Since the industry is fueled by innovation and the ongoing quest for better ways of treating or diagnosing medical problems, the future growth of this sector remains positive.

The medical device sector also continues to benefit from a new generation of materials, manufacturing processes, and technology, such as nanotechnology and micro-electro-mechanical systems (MEMS). Since the industry is fueled by innovation and the ongoing quest for better ways of treating or diagnosing medical problems, future growth prospects for this sector remain positive.

NOTE: The company, shipment and employment figures cited above come from the 2007 Census of Manufacturers, a comprehensive gathering of data from manufacturing companies conducted every five years. The $98 billion shipment figure only includes medical devices from direct companies; several billion dollars of additional shipments likely are secondary products.

The United States is an increasingly attractive location for business investment from global companies. In AT Kearney’s 2013 FDI Confidence Index, the United States surged past countries like China, Brazil and India to become the country with the top FDI prospects globally, as ranked by 302 companies representing 28 countries and multiple industry sectors. This marks the first time that the U.S. occupied the #1 spot in the survey since 2001. In a survey of U.S. manufacturers with production abroad late last year, BCG found that the majority (54 percent) are looking at re-shoring to the United States, up from 37 percent in 2012.

More and more companies are choosing to locate here after weighing the United States’ competitive advantages, including our:

The massive U.S. trade deficit is a major cause of the decline of U.S. manufacturing over the past several decades, the high unemployment rate and debilitating budget deficit. Domestic suppliers have watched as large manufacturers have offshored work and well-paying jobs. Offshoring ultimately contributes to waste and instability.

Reshoring is an efficient way to reduce imports, increase exports and regain manufacturing jobs in the United States. It’s also the fastest and most efficient way to strengthen the U.S. economy.

For the nation, reshoring brings back desirable jobs that have been lost to decades of offshoring. Reshoring also helps manufacturers recover from offshoring’s poor quality, trade secret thefts, supply chain disruptions and lengthy delivery times — all while staying cost competitive.

Now the company benefits of reshoring are growing daily as offshore sourcing faces increased wages and currencies, higher transportation and fuel costs, and inability to provide required responsiveness. Nationally, reshoring breaks out of the waiting-for-policy-decisions problem (currency, trade negotiations) and the economic zero-sum-game (taxes and spending). 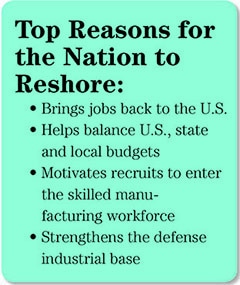 Many companies are shifting their operations back to the U.S. because offshoring has hindered their ability to rapidly deliver goods, maintain low inventories, uphold competitive costs and meet demand for rapid adjustments to unique products. In other words, Logistics plays an extremely important part of the decision.

Advancements in technology has a hand in improving the U.S. manufacturing industry’s readiness to investing in advanced manufacturing technologies, such as 3-D printing, robotics, and digital manufacturing. This new technology along with logistics and workforce development are all reasons why reshoring is a good idea.

Connect with The Reshoring Initiative for more information.

Considering supporting their efforts by becoming a sponsor.

Check Out New Balance’s Latest ‘Made in the USA’ Sneaker ...