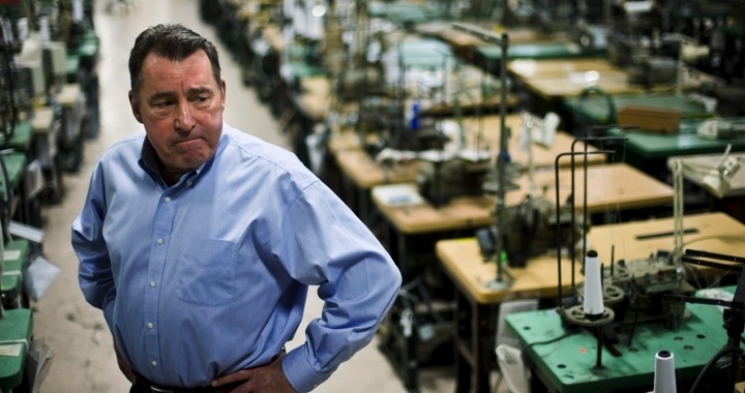 Kelly Holt
November 13, 2012
The graveyard of American businesses is receiving another occupant. Orwigsburg, Pennsylvania-based apparel manufacturer FesslerUSA, over 100 years old, is closing its doors. The company, founded in 1900, began by producing cotton underwear, and most recently has marketed private-label fashion knitwear. Its all-American approach to business reflected the values and ingenuity that made American capitalism thrive.

Third-generation owner Walter Meck and other family members bought the company back from the Fessler family after Meck’s father had sold it in 1960. After the advent of “free trade” and NAFTA had claimed its three biggest customers, the company shifted from high-volume mass-market apparel to higher-end products made with more expensive fabrics produced quickly in small quantities. The company adopted a policy of offering organic cotton, and fabrics made from bamboo.

FesslerUSA thrived. So much so that five years ago the company doubled its capacity and moved into a new factory. But it finally fell victim to the Great Recession with its tighter credit standards, Asian competition, and weak consumer spending.

The Detroit News, itself a part of a dying industry (the printed newspaper), quoted Meck as observing, “We knew that it was change or die. We had to reinvent ourselves.”

So reinvent they did. Meck laid off half his workforce and maintained a leaner, more profitable company until 2010, when sales again plummeted. New markets and new product proposals were promising, but not in time to avoid the bank calling the company’s loan.

Meck noted that his company could have survived had he been able to find a lender, but that tightened credit is a common problem for small manufacturers. Chad Moutray, chief economist for the National Association of Manufacturers, told The Detroit News,“Many of [the member companies] have complained to me that the standards for borrowing have become a lot more strict since the recession. It’s much tougher to get a loan today than it was in the past.”

In particular, new lending standards, a casualty of the country’s bailout policy, are what have made it much more difficult for struggling companies to get a loan. That, along with a national program of increased taxation and regulations on producers, has resulted in jobs and production going overseas. Meck also blamed part of his company’s problem on lack of investor interest — not surprising to analysts, given that the economy is scaring investors into hanging onto their money.

Fessler was one of the few remaining vertically integrated companies, meaning that all aspects of production remained under one roof. The company wove its own fabric, and did its own cutting and sewing.

Los Angeles-based American Apparel is an example of a highly successful clothing manufacturer using the vertical integration model, having carved itself a good chunk of a niche market. It has bucked the system. According to The Detroit News report,
At Fessler, that job loss has a face. The News continued,
Bambrick mourns the disappearance of so many textile jobs: “I am an American girl and I wish more people would think like me and would have left the industry here and not sent it overseas.”

Americans still do have choices, although they are shrinking. Though die-hard label-readers are finding fewer and fewer items made anywhere but China, analysts note that perseverance can pay off. In addition to American Apparel, “Made in the USA” labels can still be found at Munro Shoes, Finley Shirts, Unis, and Patricia Wolf, among others.

For Fessler, however, the run is over. Production will shut down in November after nearly 113 years, leaving 130 employees out of work. Meck commented,
Now more than ever, critics say, Americans should step up the efforts to Buy American, to prevent more Fessler stories.
SOURCE: The New American