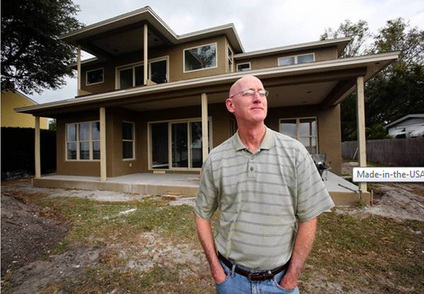 From the South Florida rock in its concrete slab to the roof trusses milled in Yulee, Greg and Jennifer Gent’s new house may be the only one in Central Florida built entirely with U.S.-made products.
The Gents set out earlier this year with the goal of constructing a house in Belle Isle that would serve as a model for an industry that has long used products mined or manufactured in other countries. Their unusual undertaking became the subject of news reports across the country.

Now, about a month from completion, the three-bedroom house on the Conway Chain of Lakes stands as a pioneering lesson in the challenges, costs and limitations of building a made-in-America house. The couple have cataloged their construction story at buildtheusa.us.

Two rules were imposed on the job: All products had to be made in the U.S., though not necessarily by a U.S. company. And all workers had to be legal residents of the country. The point, the Gents said, was to support jobs in the U.S.

In some cases, the workers were employed by companies with plants on American soil but with global headquarters elsewhere; it is a mistake, Greg Gent said, to assume that a U.S. company manufactures all its products in the States, or that companies marketing their U.S. presence actually manufacture their wares domestically.

“We started checking all the products, and then [contractor] John [Carr] did, and then John got the subs to,” he said. “No one tried to sneak anything by.”

The ashen porcelain tiles that cover the floors throughout the two-story house were made in the United States, though the supplier is a subsidiary of Italy’s Florim Ceramiche SpA. The shingles were similarly manufactured in the U.S. by a business owned by a French corporation.

Carr, president of Belle Isle-based JPC Construction Inc., said the biggest challenge was finding legal workers in a market abandoned by many crews after the housing slump started five or six years ago. An increase in production-home construction during the past year has left skilled workers in high demand, he added.

Difficulties finding the right workers, plus rain delays, added at least three weeks to the job. And ensuring the house was built with U.S. products, materials and labor added several more weeks.

Subcontractors were dutiful about the made-in-America mission. Carr said his father-in-law, Russ Willis, did the electrical work in the house and discovered a low-voltage surge-protector box marked “Made in the USA” that, upon closer inspection, had components within it from Canada and Mexico as well as the U.S.

Part of the home’s soffits were manufactured by a company that had just started purchasing its supplies from China, so an earlier product batch built in the U.S. had to be tracked down and used.

Carr, who used his cellphone camera to document where products had been manufactured, estimated that the additional cost of wrapping the house in a virtual American flag was about $2,500 to $3,000, or about 1 percent of the overall cost of construction. Two of the project’s seemingly least-expensive items — screws and nails — were responsible for driving much of that higher tab, because they cost about four times as much as their foreign-made versions.

“I’d like to change to do this entirely” with other houses, the contractor said. “But you’ve got the competition. My clients now say they’d like to do this, but there’s the cost.”

Greg Gent is able to recite the origins of almost every part and product used in building the house, from the suppliers of sand and limestone in Lake Wales to the cement company in Sumterville. The item he is most excited about, however, is the Pawleys Island handcrafted rope hammock from South Carolina.

Unable to find a ceiling fan manufactured on U.S. soil, he said he and his wife are holding off on ordering any. Maybe someone in this country will start manufacturing them again, he said.