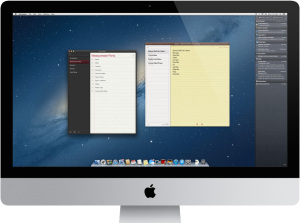 By Mikey Campbell
December 3, 2012
Apple may be taking some of the burden of assembling the new iMac off Chinese supply partners by performing parts of assembly in the U.S., as a number of newly-purchased standard units are showing an “Assembled in USA” notation usually reserved for made-to-order machines.

“Assembled in USA” notation found on a new 21.5-inch iMac. | Source: iFixit
While the markings don’t necessarily mean that Apple is in the midst of transferring its entire assembly operation from China to the U.S., it does indicate that at least a few of the new iMacs were substantially assembled domestically. Besides built-to-order machines, the 21.5-inch iMacs are some of the first known examples of an Apple computer being assembled in the U.S., according to Fortune.

The publication noted that Apple’s American assembly has been a topic on the company’s Support Communities forum since 2006, with most threads concluding the markings are limited to the addition of extra components in an original order, or for refurbished products. However, the most recent post regarding the matter shows a standard iMac SKU purchased from authorized reseller B&H Photo bearing the “Assembled in USA” marking.

A new iMac purchased by a Fortune reader from the San Jose, Calif., Apple Store as well as the unit torn down by repair firm iFixit have identical labels.

As part of its duties, the U.S. Federal Trade Commission regulates manufacturers’ “Made in USA” and “Assembled in USA” assertions, pointing out that that latter cannot be a simple “screwdriver” assembly where parts made overseas are bolted onto a near-finalized product.

From the FTC regarding the “Made in USA” standard (emphasis of example added):

A product that includes foreign components may be called “Assembled in USA” without qualification when its principal assembly takes place in the U.S. and the assembly is substantial. For the “assembly” claim to be valid, the product’s last “substantial transformation” also should have occurred in the U.S. That’s why a “screwdriver” assembly in the U.S. of foreign components into a final product at the end of the manufacturing process doesn’t usually qualify for the “Assembled in USA” claim.

Example: A lawn mower, composed of all domestic parts except for the cable sheathing, flywheel, wheel rims and air filter (15 to 20 percent foreign content) is assembled in the U.S. An “Assembled in USA” claim is appropriate.

Example: All the major components of a computer, including the motherboard and hard drive, are imported. The computer’s components then are put together in a simple “screwdriver” operation in the U.S., are not substantially transformed under the Customs Standard, and must be marked with a foreign country of origin. An “Assembled in U.S.” claim without further qualification is deceptive.

This suggests that there is at least some substantial assembly being performed in the U.S., though it is not clear what that entails or why. One reason could be the redesigned iMac’s constrained supply, which CEO Tim Cook made note of in Apple’s quarterly conference call in October.

As for Apple’s future plans with domestic assembly, Cook said at the D10: All Things Digital conference in May that he wanted more American-made Apple products, but noted workforce limitations when compared to China.

“We will do as many of these things [in America] as we can do,” Cook said, “and you can bet that we’ll use the whole of our influence to do this.”