Donald Trump wanted to market a line of men’s clothing that would bear his name.

He told people working with him to help find a company known for producing quality merchandise on a mass scale. In the end, Trump signed on with Phillips-Van Heusen, a manufacturer of affordable shirts produced in factories in 85 countries.

The 2004 deal — one of the first of many merchandise-licensing arrangements in which Trump attached his name to products made by foreign workers and sold in the United States — is relevant today as the billionaire businessman wages a populist presidential campaign in which he accuses companies of killing U.S. jobs by moving manufacturing overseas to take advantage of cheap labor and lax workplace regulations.

Documents and interviews reveal the personal role Trump played in negotiating the deal. Participants said they could not recall him expressing a preference that products be made in the United States.

“Finding the biggest company with the best practices is what was important to him,” said Jeff Danzer, who was vice president of the company hired by Trump to broker the deal. “Finding a company that made in America was never something that was specified.” 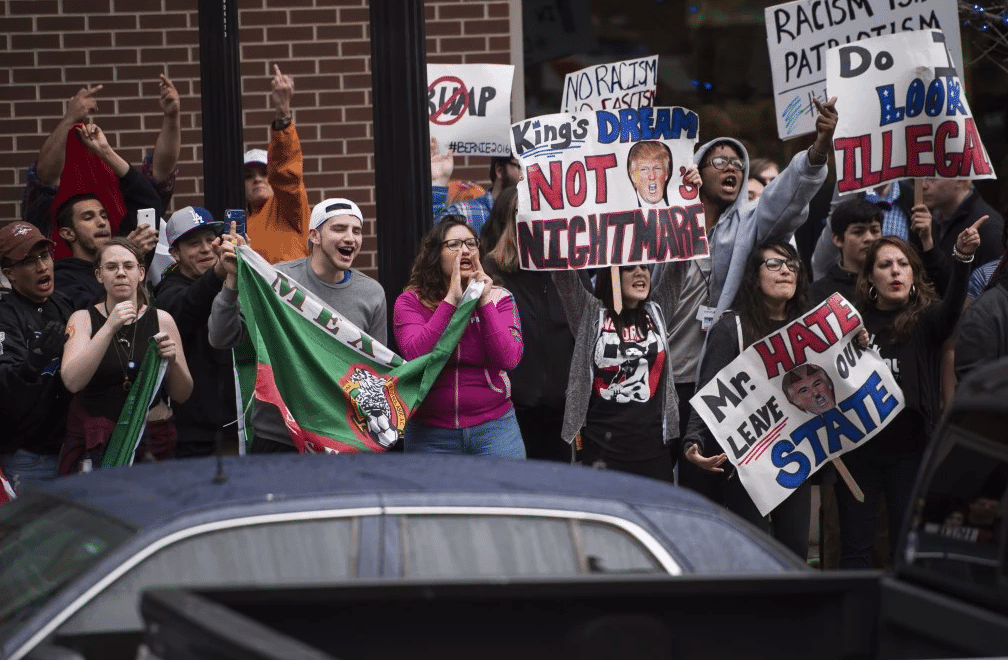 March 12, 2016 Protesters in Kansas City, Mo., shout across a street to Trump supporters as they wait for Trump to speak. Jabin Botsford/The Washington Post

Today, Donald J. Trump Collection shirts — as well as eye­glasses, perfume, cuff links and suits — are made in Bangladesh, China, Honduras and other low-wage countries.

Trump’s daughter Ivanka, a vice president at his company and frequent campaign surrogate, markets hundreds of additional products under her own line of jewelry and clothing. Many are made in China.

The contradiction between Trump’s business decisions and his political agenda illustrates the sometimes-awkward transformation of an aggressive, ­profit-oriented marketer and real estate mogul into a firebrand champion of the struggling working class.

When Trump began cutting licensing deals more than a decade ago, many business executives and politicians in both parties argued that free trade and overseas production were beneficial to everyone — a needed boost for poor, developing economies abroad and a path to cheap goods for middle-class consumers in the United States.

Trump, though, has emerged as the Republican presidential front-runner largely by tapping into growing anger among voters who think free-trade policies — such as the ones that have added to Trump’s fortune — have devastated U.S. communities that have lost manufacturing jobs to Mexico, China and elsewhere.

Trump’s rivals and critics say he is a hypocrite, enriching himself with overseas labor while blasting the practice for political gain.

Representatives for the Trump Organization did not respond to requests for comment, and a spokesman for Ivanka Trump’s product line declined to comment.

On the campaign trail, Trump has blasted Ford Motor Co. for opening factories in Mexico, criticized a U.S. drug company that moved its headquarters offshore and said he will eat no more Oreo cookies because its maker, Nabisco, moved part of its production to Mexico.

When news broke three weeks ago that the air-conditioner maker Carrier was moving 1,400 jobs from a plant in Indianapolis to Monterrey, Mexico, Trump wrote on Facebook: “We cannot allow this to keep happening. It will NOT happen under my watch.”

Moreover, Trump has mentioned labor conditions overseas in support of his position that goods should be made in the United States, telling CNN last year that Chinese laborers are “paid a lot less and the standards are worse when it comes to the environment and health care and worker safety.”

During Thursday night’s Republican candidates’ debate, Trump said he knows how to fix the policies that encourage outsourcing because he spent so many years taking advantage of them.

“Nobody knows it better than me,” he said. “I’m a businessman. These are laws. These are regulations. These are rules. We’re allowed to do it. . . . But I’m the one that knows how to change it.”

Trump’s rivals for the Republican presidential nomination have tried — so far to no avail — to undercut his popularity among working-class voters by portraying him as someone who rampantly outsources jobs. A similar line of attack proved effective four years ago against then-GOP nominee Mitt Romney.

Sen. Marco Rubio (R-Fla.) called on Trump during a March 3 debate to announce that “all the Donald Trump clothing will no longer be made in China and in Mexico but will be made here in the United States.” Trump dismissed the notion, arguing that China’s currency policies “make it impossible for clothing makers in this country to do clothing in this country.”

Critics say Trump is being disingenuous.

Robert Lawrence, a professor of trade and investment at Harvard’s John F. Kennedy School of Government, has reviewed Trump-brand products for sale online and found that a large percentage are imported.

For example, the website selling Ivanka Trump’s merchandise line links to 838 products — 628 of them imported. Of those, 354 are from China, a country that Donald Trump often says takes advantage of the large U.S. trade deficit.

Ivanka Trump’s products also were marketed alongside her father’s on the Trump Organization website. But amid criticism last week of the family’s outsourcing practices, his daughter’s page was removed.

“I don’t decry what he and his daughter do,” said Lawrence, who served on the Council of Economic Advisers under President Bill Clinton. “But at the same time, for him to claim that this is somehow immoral and go after companies that have relocated manufacturing when he has done the same puts him in conflict with his own rhetoric.”

Lawrence said that some of Trump’s proposals could hurt his own businesses. His proposed 15 percent tax on companies that outsource jobs, or a proposed 20 percent tax for importing goods, could result in higher prices for consumers buying Trump-brand products. Recently, he has discussed placing a 45 percent tariff on Chinese imports.

Lawrence estimated that Trump’s $250 suits made in China would suddenly be priced in the United States at $350 or more. “The impact would be staggering and widespread,” he said.

Trump struck the 2004 deal with Phillips-Van Heusen, which owns Tommy Hilfiger and Calvin Klein, at a critical moment for his brand — the same year his hit show “The Apprentice” premiered.

Several people engaged in the negotiations said that Trump was personally involved. None could remember him specifically mentioning the U.S.-worker issue.

“If he’s concerned about jobs in the United States, it should have been a question he asked,” said one person involved in the deal, who spoke on the condition of anonymity to avoid offending Trump. “And I can tell you that in none of the meetings did it come up.”

The shirtmaker used factories in some countries, including Bangladesh, China and Honduras, where labor violations such as forced overtime are common, according to Scott Nova, executive director of the Worker Rights Consortium, a group that monitors factory conditions.

The agreement signed by Trump and Phillips-Van Heusen placed no restrictions on where Trump dress shirts, tuxedo shirts and neckwear could be manufactured.

Phillips-Van Heusen agreed that any products “manufactured by it or for it anywhere in the world” would not be made using child labor “as defined in the relevant jurisdiction of production,” according to the contract, which was filed in a later lawsuit in New York between the broker company and Trump.

Mark Weber, who was chief executive of Phillips-Van Heusen at the time, said the company employed a “global sourcing network” to produce clothes for Trump’s line and other brands.

Weber described Trump as a master negotiator who correctly predicted the brand would be a smashing success and persuaded a wary Phillips-Van Heusen to sign on.

In a deposition filed in the New York lawsuit, Trump recalled that the massive clothier had been eager for the deal. “They were very hot to make a deal with us,” Trump said, according to a deposition transcript provided to The Washington Post by Jay Itkowitz, an attorney for the broker company that unsuccessfully sued Trump.

Weber, who is supporting Trump for president, said he concluded at the time that Trump was a patriot.

“He had a clear preference to support American values and what was good for America,” Weber said.

Asked whether Trump ever specifically expressed a preference for items bearing his name to be made in America, Weber said, “You’re asking me for specifics that are very hard to recollect.”

Weber said that at the time, the industry’s widely shared goals — promoted through overseas production — were to improve standards of living for workers in the Third World and to offer U.S. consumers lower prices.

“That was a time when America was very much in favor of building a better life for the people of our hemisphere,” he said, referring to factories in Central America.

He also said that Trump never attempted to require that products be made in the United States as part of the contract between the two companies.

“No one can tell us where to make our products,” said Weber, who left the company in 2006. “I have never signed a contract in my 40 years of experience where someone could tell me where to make my goods.”

After Trump drew scrutiny over the summer for disparaging comments about Mexican immigrants, Macy’s, which sold his clothing line, announced it was ending its relationship with him. Phillips-Van Heusen, now called PVH Corp., quickly followed suit, saying that its licensing deal with Trump would be unwound.

Dana Perlman, a spokeswoman for the company, said last week that it no longer manufactures Trump clothing. She declined to comment further.

The North Face Rolling Out Made in America Line