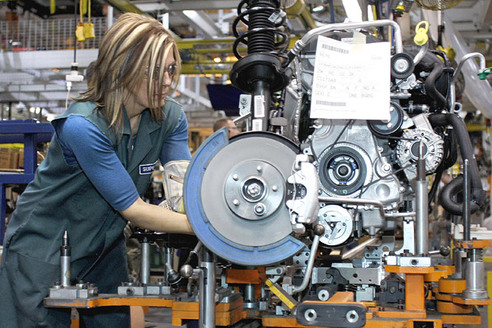 According to a survey by my firm, Boston Consulting Group, 37 percent of U.S.-based manufacturing executives at companies with sales greater than $1 billion are planning to bring back production to the U.S., or are “actively considering” doing so. The rate was even higher, 48 percent, among executives at companies with $10 billion or more in revenues. This is the first time we’ve surveyed executives on this topic, but five years ago almost no one talked about reshoring. It was all about outsourcing. 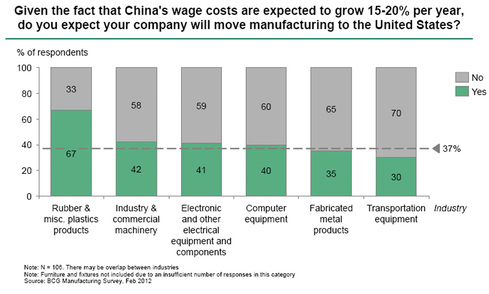 Among respondents in rubber and plastic products, some 67 percent said they expect to “reshore” production from China. The percentages were lower but still significant in other industries—42 percent in machinery, 41 percent in electronics, 40 percent in computers, and 35 percent in fabricated metal products.

Conducted in late February, the survey drew responses from decision makers at 106 companies across a broad range of industries.

The top factors cited as driving decisions on future production locations were labor costs (57 percent), quality (41 percent), ease of doing business (29 percent), and proximity to customers (28 percent). In additional, 92 percent said they believe that Chinese labor costs “will continue to escalate,” and 70 percent agreed that “sourcing in China is more costly than it looks on paper.”

Research and observations from client work prompted my colleagues and I to write several articles over the past year about the advantages of manufacturing in the United States.

We predicted in earlier reports that improved U.S. competitiveness and rising costs in China will put the U.S. in a strong position to add 2 million to 3 million jobs in a range of industries—and an estimated $100 billion in annual output by the end of the decade.

The new survey confirms this is already happening. Expect the trend to accelerate, starting around 2015.

Sirkin is a Chicago-based senior partner of The Boston Consulting Group (BCG) and co-author, with Arindam K. Bhattacharia and James W. Hemerling, of GLOBALITY: Competing with Everyone from Everywhere for Everything (Business Plus, June, 2008).

4 Lessons from the U.S. Manufacturing Revival Made in America: Global Companies Expand in U.S. Towns
Scroll to top
%d bloggers like this: