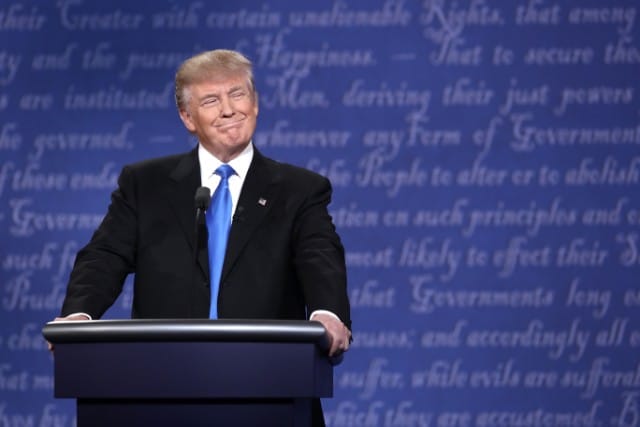 President-elect Donald Trump says he’ll personally call every company in America that plans to ship jobs overseas and ask them to reconsider.

But there are ways to stop American companies from offshoring jobs that don’t involve the U.S. president spending hours on the phone. After all, hundreds of companies offshore jobs every year ― and the president only has so much time.

Trump could use the power of the executive branch to protect domestic manufacturing and make it more competitive over the long term. Regardless of whether Trump’s threat to punish offshoring companies with a 35-percent tariff on imports they ship back to the U.S. is practical, the president indeed has far-reaching power to overturn existing U.S. trade practices.

Trump “will possess ample statutory powers he needs to restrict all forms of international commerce, including merchandise and service trade, capital flows, and private remittances,” Gary Hufbauer, a lawyer and economist with the Peterson Institute for International Economics, wrote in November. “He can slap restrictions without congressional say-so and with little fear of judicial reversals.”

Federal procurement is one way Trump could boost domestic manufacturing with relative ease.

Related article: Trump Supporters Anxious For Jobs To Come Back To USA[p][/p]

Congress requires the federal government to favor American-made products when it buys things. But in recent decades, the U.S. has exempted goods produced in countries with which the U.S. has trade agreements from so-called Buy America provisions. As a result, rather than using its purchasing power to give preferential treatment to goods produced domestically, the federal government treats goods manufactured in countries like Mexico and China the same as if they were American-made products.

Because those elements of trade agreements are enacted through regulatory waivers, Trump can simply scrap the waivers, according to Lori Wallach, director of Public Citizen’s Global Trade Watch.

“Trump, were he so inclined, could guarantee a lot more purchase of U.S. manufactured goods ― steel, glass, but also cars, computers, phone systems et cetera ― by getting rid of that waiver. And Congress does not really have anything to do about it,” Wallach said.

Foreign countries would respond by filing legal challenges against the U.S. for violating the agreements, according to Wallach, but those cases take roughly three years to get decided. In the meantime, the U.S. could renegotiate the agreements themselves so the country would not be in violation, she argued.

Trump, were he so inclined, could guarantee a lot more purchase of U.S. manufactured goods ― steel, glass, but also cars, computers, phone systems et cetera ― by getting rid of that waiver.

Of course, successfully raising barriers to foreign imports is one thing ― and achieving the goal of restoring domestic jobs is another entirely.

Economists generally think that if Trump hikes tariffs on imported goods, other countries will hike tariffs on American exports, possibly resulting in a trade war that could lead to higher prices, lost jobs, and even a recession.

Wallach and other trade-deal skeptics are far less concerned that restricting trade would provoke a vicious cycle of retaliation with other countries.

Foreign nations might agree to renegotiate on terms more favorable to the U.S. for fear of losing access to the American consumer market entirely, Wallach said ― a threat she said Trump could credibly hold over them.

The U.S. has particularly strong leverage over China, Scott Paul, executive director of the Alliance for American Manufacturing, claimed in a New York Times op-ed this month.

“China has a big incentive to get along with the United States: America is the destination for nearly one in five Chinese exports, making us a market China can’t afford to lose,” Paul wrote. “American exports to China, meanwhile, account for less than 1 percent of our gross domestic product.”

There are other ideas, however, that may entail less risk. Democrats in the U.S. Senate ― several of whom happen to be up for election next cycle in rust-belt states carried by Trump ― have been pushing several policy proposals designed to make it less profitable for an American firm to lay off workers and shift production to a country like Mexico, where wages are lower.

President Barack Obama, particularly during his 2012 re-election, repeatedly bashed Republicans for supporting “tax breaks for companies that ship jobs overseas.” There is no tax break specifically for offshoring, but companies can deduct moving expenses from their tax liability, and those expenses can be related to shifting production to another country.

This year, Senate Democrats proposed pairing an elimination of the supposed offshoring tax break with a tax credit that would reward companies for shifting jobs to the U.S. ― something they’ve proposed before. Tax experts have been skeptical as to whether such a measure would actually save jobs.

Another Democratic proposal would require the federal government to consider whether a company is offshoring jobs when it awards federal contracts ― an idea Democrats and Trump may agree on. Staying on the government’s good side was a factor in Carrier Corp.’s decision to keep its Indiana factory open after Trump bad-mouthed the company’s offshoring plans during the campaign. (The firm’s parent company, a major federal contractor, got a modest tax break from the state of Indiana.)

Some of these proposals are “sticks” ― ways of making offshoring and importing foreign-made goods less cost-effective. But many manufacturing proponents argue that investing in “carrots” that make domestic production more attractive to companies is a surer long-term method for restoring the country’s manufacturing base.

They have done a better job providing education that can lead to a person earnings a better standard of living and that is around the apprenticeship system.

Germany is often cited by experts as a model for a developed democracy with a strong manufacturing sector and skilled, high-paying jobs associated with it.

Nearly 20 percent of German jobs come from manufacturing, compared with about 10 percent in the United States.

A crucial component of Germany’s manufacturing prowess is its apprenticeship system, which trains high school students in technical trades from age 14 onward, according to Stephen Silvia, an expert in German industrial policy at American University.

Half the students’ time is spent learning in the classroom, and half is spent training with craftsmen at a company until they graduate high school, according to Silvia.

“In terms of non-college bound, native-born Germans, they have done a better job providing education that can lead to a person earning a better standard of living and that is around the apprenticeship system,” Silvia said.

Other German manufacturing advantages include sophisticated efforts by business groups to promote exports and the government’s heavy investment in research and development, Silvia noted.

Replicating this in the U.S. would be an uphill climb due to Americans’ deep-seated aversion to federal educational mandates, and close coordination between industry and government.

Expanding public research funding and coordination with industry to ensure the relevance of that research “would be one of the best things” the Trump administration can do to promote manufacturing over the long term, Silvia said.

“Having institutions where their job is to engage in basic research that generally may not directly have an obvious private sector use, but provides the basic foundation of private research and expands the size of your R&D labor force … is an important piece. That way you are not completely unanchored in the interests of business,” Silvia said.

Reshoring: More Companies See Advantage to Manufacturing in the USA

American Made Cell Phone: Is Apple Considering A Made in USA iPhone?
Scroll to top
%d bloggers like this: