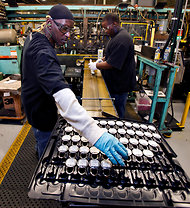 Andy Manis/Bloomberg News: Maurcie Johnson, left, and Diandre Jackson stacked locks at the Master Lock plant in Milwaukee in January.
By EDUARDO PORTER of the New York Times on April 3, 2012
E-mail: [email protected] Twitter: @portereduardo
To hear Mike Bink, one might believe American manufacturing is about to recapture its lost glory.Master Lock, which has made locks in Milwaukee since 1921, has brought 100 jobs back from China over the last year and a half. And Mr. Bink, who has worked at the plant for 33 years and heads the United Auto Workers local, is sure more will follow. “They are making a lot of capital investment; buying a lot of new equipment,” he said. “That will create more jobs.”Master Lock’s story dovetails nicely with the budding upturn in manufacturing employment, which has rekindled hope across a Rust Belt pummeled by 30 years of job loss. Nationwide, factories have added 400,000 jobs in the last two years, the first sustained bout of growth since the 1990s, replacing about a fifth of the positions lost during the recession. Other companies, from Otis to General Electric, are bringing home jobs once thought lost for good.

Mr. Bink’s enthusiasm has echoed from the factory floor all the way to Washington. During his State of the Union Message, President Obama wove Master Lock’s tale of repatriated jobs into a narrative of recovery that could serve him well in November. “We have a huge opportunity, at this moment, to bring manufacturing back,” the president said. “But we have to seize it.”

To do so, his administration has proposed a piñata of tax breaks and incentives intended to transform the incipient movement into a new golden age for factory jobs.Things have not looked this promising for manufacturing jobs in a long while. Rising costs in China — where the government is letting the currency gain against the dollar and wages are rising at a double-digit pace — are making it more attractive for American companies to produce at home. Expensive oil adds to the cost by pushing up the price of freight.Yet a revolution in manufacturing employment seems far-fetched. Most of the factory jobs lost over the last three decades in this country are gone for good. In truth, they are not even very good jobs.

As much as the administration needs a jobs strategy, one narrowly focused on manufacturing is unlikely to deliver.

Much of the anxiety about factory jobs is based on the misconception that job losses have been due to a sclerotic manufacturing sector, unable to compete against cheap imports. Until the Great Recession clobbered the world economy, manufacturing production was actually holding its own. Real value added in manufacturing, the most precise measure of its contribution to the economy, has grown by more than two thirds since its heyday in 1979, when manufacturing employed almost 20 million Americans — eight million more than today.

American companies make a smaller share of the world’s stuff, of course. But what else could one expect? Thirty years ago China made very little of anything. Today its factory output is almost 20 percent of world production and about 15 percent of manufacturing value added.

What’s surprising is how little the United States lost in that time. American manufacturers contribute more than a fifth to global value added.

Manufacturers are shedding jobs around the industrial world. Germany lost more than a fifth of its factory jobs from 1991 to 2007, according to the United Nations Industrial Development Organization, about the same share as the United States. Japan — the manufacturing behemoth of the 1980s — lost a third.

This was partly because of China’s arrival on the world scene after it joined the World Trade Organization in 2001. Since then, China has gained nearly 40 million factory jobs. But something else happened too: companies across the developed world invested in labor-saving technology.

Consider Master Lock. Its Milwaukee plant is operating at capacity for the first time in 15 years, before it started sending work overseas. It is producing much more stuff than it did back then. But it is doing so with 412 workers — about 750 fewer than it had 15 years ago.

So it is across the economy. In his forthcoming book, “The New Geography of Jobs,” the University of California, Berkeley, economist Enrico Moretti points out that the average American factory worker makes $180,000 worth of goods a year, more than three times what he produced in 1978, in today’s dollars.

It may not matter to factory workers who lost their jobs. Whether forced out because an employer moved production to China or because a fancy new machine makes it easier to compete against a rival in China, the job is gone.

Still, the distinction is important. Without an understanding of the forces at work, policy makers’ attempts to bolster manufacturing could backfire.

One thing is clear. Most of the jobs lost to China and other poor countries cannot “come back.” They don’t pay anywhere near enough. And they don’t exist here anymore anyway.

The factory jobs we really want will be fewer and will require more education. But they will pay more.

Remember agriculture? In the 1960s, plant scientists at the University of California, Davis, developed an oblong tomato that ripened uniformly, and its engineers developed a machine to harvest it with one pass through the fields. By the 1970s the number of workers hired for the tomato harvest in California had fallen by 90 percent.

In the book “Promise Unfulfilled,” Philip Martin, an economist at the university, says that in 1979 the worker advocacy group California Rural Legal Assistance sued the university for using public money on research that helped agribusiness at the expense of farm workers. And in 1980, Jimmy Carter’s agriculture secretary, Bob Bergland, declared that the government wouldn’t finance any more projects aimed at replacing “an adequate and willing work force with machines.”

It’s hard to say that workers won this battle, however. After Mr. Bergland pulled the plug, research on agricultural mechanization came to a near-halt. Yet farm work today remains probably the worst paid, most grueling job in the United States.

A tricky thing to understand is that most jobs in the United States are created in areas of the economy not exposed to global competition. They are nannies and doctors, lawyers and roofers. In a recent study, the Nobel laureate Mike Spence and Sandile Hlatshwayo of New York University found that the part of the economy that does not have foreign competitors added 27.3 million jobs from 1990 to 2008. The sector that competes in global markets added virtually none.

This doesn’t mean the administration should ignore manufacturing. We need world-class, innovative industries that compete in global markets. They won’t add a ton of jobs precisely because they must stay lean to compete. But they will pay for those jobs.

This pattern suggests, however, that a jobs strategy should take care not to blunt the edge of
our most competitive firms. If outsourcing sharpens their edge on world markets, punishing then for doing so could destroy American jobs.

More important, perhaps, manufacturing is not the nation’s only cutting-edge industry. Many of the most innovative firms are not manufacturers but service companies. Apple is very competitive. But so are the companies that design applications running on its iPhones and iPads. Hollywood studios and marketing companies are big exporters. These firms need highly trained workers and pay high wages.

Mr. Moretti says each job in an “innovation” industry, broadly understood, creates five other local jobs, about three times the number for an average job in manufacturing. Two of them are highly paid professional positions and three are low-paid jobs as waiters or clerks.

Innovation — not manufacturing —has always propelled this country’s progress. A strategy to reward manufacturers who increase their payroll in the United States may not be as effective as one to support the firms whose creations — whether physical stuff or immaterial services — can conquer world markets and pay for the jobs of the rest of us.

What are your thoughts on The Promise of Today’s Factory Jobs?

Manufacturing Jobs Still Matter, As Does the Dollar2 Connecticut Shoreline Firms Collaborate on 'Buy American Act'
Scroll to top
%d bloggers like this: