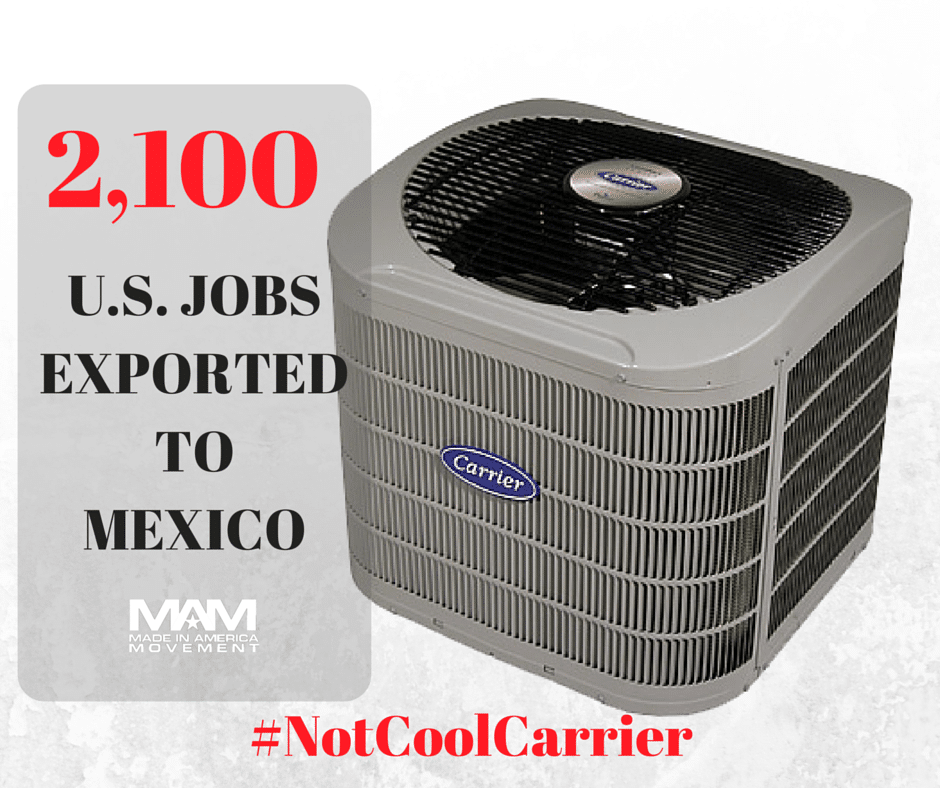 In the week before Valentine’s Day, United Technologies expressed its love for its devoted Indiana employees, workers whose labor had kept the corporation profitable, by informing 2,100 of them at two facilities that it was shipping their factories, their jobs, their communities’ resources to Mexico.

A few workers shouted obscenities at the corporate official. Some walked out. Others openly wept as United Technologies shattered their hopes, their dreams, their means to pay middle-class mortgages.

Three days later, 1,336 workers at Philadelphia’s largest remaining manufacturer, Cardone, learned that company planned to throw them out too and build brake calipers in Mexico instead. Two weeks earlier, a Grand Rapids, Mich., company called Dematic did the same thing to its 300 workers.

No surprise. In the first decade of this century, America lost 56,190 factories, 15 a day.

Republican presidential candidates talk incessantly of building a physical wall to keep impoverished Mexican immigrants out of America. What they fail to offer is an economic barrier to prevent the likes of United Technologies and Cardone and Dematic from impoverishing American workers by exporting their jobs to Mexico.

The president of Carrier, owned by United Technologies, gathered the Indianapolis factory employees, skilled workers who earn an average of $20 an hour, and informed them that the corporation planned to kick them to the curb but expected them to perform to the highest standards until Carrier opened a new plant in Monterrey, Mexico, where workers will be paid $3 an hour.

Carrier President Chris Nelson told the group, “This was an extremely difficult decision.”

Such difficulties for poor, poor United Technologies! It was making a nice profit at its Indianapolis and Huntington factories. But it was not the big fat profit it could pocket by paying Mexican workers a mere $3 an hour, providing $3 an hour in health or pension benefits, and doing it all in the nation with the longest work weeks among the 36 countries in the Organization for Economic Co-operation and Development.

It would be “extremely difficult” for United Technologies to abandon Indiana after the corporation grabbed $530,000 from the pockets of hard-working Hoosiers over the past nine years as the state’s economic development agency forked over taxpayer cash to the corporation.

It would be even more “difficult” to turn its back on America considering that United Technologies grabbed $121 million from a federal tax credit program established specifically to ensure that green manufacturing jobs remained in the United States. Carrier took $5.1 million of those tax credits in 2013.

“This is strictly a business decision,” Nelson told the jeering workers. It wasn’t because of anything they had done. It was just that Mexico allows corporations to exploit its people in ways that America does not. Its minimum wage is 58 cents an hour, while the United States requires at least $7.25. For now, at least. Some GOP president candidates (Donald Trump) have said they think that’s too high.

The North American Free Trade Agreement (NAFTA) ensnared Mexican and American workers in a race to the bottom. And the proposed Trans-Pacific Partnership (TPP), a free trade deal among 12 countries instead of just three, would place American and Mexican workers in an even worse competition. They’d vie for jobs with forced and child labor in places like Brunei, Malaysia and Vietnam.

Under NAFTA, cheap American grain shipped to Mexico without tariffs destroyed peasant farming. And that prompted migration north. Meanwhile, American factories saw desperate Mexicans willing to work for a pittance, a government unwilling to pass or enforce environmental laws, and because of NAFTA, no tariffs when the goods were shipped back to the United States. That propelled factory migration south.

Before NAFTA, the United States had a small trade surplus with Mexico. That disappeared within a year, and now the annual trade deficit is approximately $50 billion.

Though it has been 22 years since NAFTA took effect, a report issued last week by the AFL-CIO says, “Labor abuses in many cases are worse now than before NAFTA. . . In short, NAFTA has contributed to labor abuses, not improvements.”

The report says the Mexican government fails to enforce labor laws and refuses to ensure that workers can form independent labor unions to try to protect their own rights. In fact, the report says, “The human and labor rights situation in Mexico is rapidly deteriorating.”

The AFL-CIO report makes it clear that the TPP would worsen the situation because it would give corporations like United Technologies the option of moving to places like Vietnam where they could pay trafficked workers and child laborers $1 an hour. Or less.

Just like with NAFTA, there’s nothing enforceable in the TPP that would stop the labor abuses. It would facilitate corporations forcing workers from Indianapolis, Philadelphia and Monterrey, Mexico, into competition with 14-year-olds laboring 60-hour-weeks for $1-an-hour in Malaysia.

Just like United Technologies, these corporate CEOs would say it was “strictly business” to offshore American mills, industry that had served as city centers for decades, even centuries, factories so synonymous with towns that the communities took their names like Ambridge (American Bridge) and Hershey, which, by the way, laid off workers at its Pennsylvania home in 2007 and opened a chocolate plant in Monterrey, Mexico.

The AFL-CIO investigation of the TPP determined that it would do nothing more than increase corporate profits while sticking workers – in the United States and elsewhere – with lost jobs, lower wages and repressed rights.

For 22 years NAFTA has destroyed subsistence farming in Mexico and good, middle class factory jobs in the United States. Maybe corporations have made out like bandits. But the banditry should be stopped for the heartache it has caused on both sides of the border.

As Carrier President Nelson told the Indianapolis workers, members of my union, the United Steelworkers, that he was taking their jobs from them so that shareholders and corporate executives could make a few extra bucks, the workers protested. Nelson kept saying, “Quiet down. Let’s quiet down.”

That’s exactly the opposite of what American workers and communities should be doing. They should shouting from rooftops, “No TPP!”  For the love of American manufacturing, they should be yelling bloody murder.